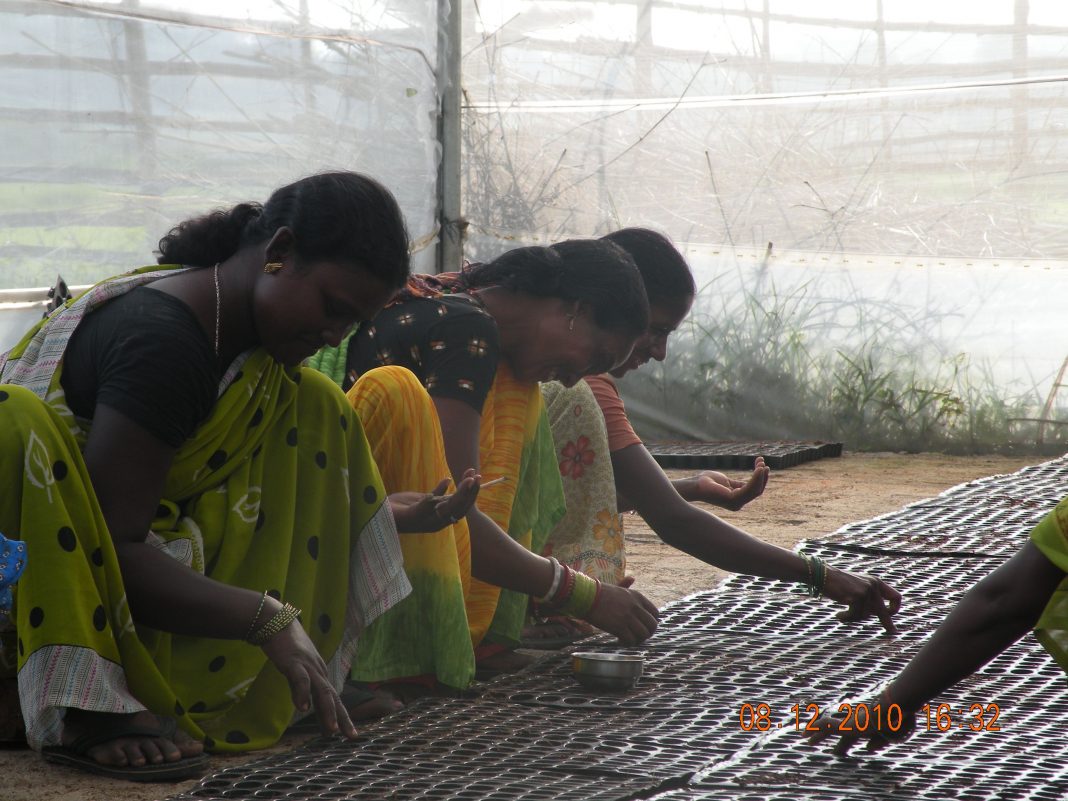 The pilot is just the starting point. . .

The turnaround in the lives of 190 tribal-farmers that the Jharkhand government has witnessed, has now prompted the state to consider expansion of its pilot project to cover 100,000 tribal farms.  The success in formulating the concept of cultivating just 25 decimals of land (approximately 1,000 square metres) per tribal family has made even UNDP officials sit up.  The land is small enough to be cultivated by a tribal couple, without the assistance of additional workforce.  But, with technology and proper handholding, it can provide the tribal couple with enough cashflow to make the family financially independent.  It is now likely to become the model for many programmes around the world where UNDP is trying to make marginalized populations become economically independent.

But some economists see dangers that lie ahead, which need to be taken into account even while the state now tries to scale up the project to cover 100,000 tribals.

The first is the problem of education.  “Few tribals have seen an income of Rs.25,000-40,000 coming in every three months.  The state will now have to get its various agencies to begin educating these tribals not to squander their funds away,” explains Jayant Ghosh, managing partner of Maati Agrotech, which has worked closely with the Jharkhand government in making the pilot project a roaring success.  “They will have to learn to save some of the money for seeds and fertilisers, and some for managing their expenses for the next three months, till the next crop is ready for harvesting.  Unless this is done, many families will see the menfolk blow up this money in drinking and gambling and wreck both their economic independence and the happiness of their families,” echoes Kapil Deo, Ghosh’s partner in this pilot project.. Next comes the need to provide a nodal agency that can supervise the manner in which various stakeholders ensure that hand-holding of the farmers continues on a long term basis.  One of the most successful administrative programmes in India for achieving this objective is the GGRC (Gujarat Green Revolution Company Ltd).  The principal function of GGRC is to ensure that micro-irrigation system providers actually hand-hold the farmers at their own cost, if they want to continue selling their products and services in the state of Gujarat.  GGRC lists out parameters that must be included in this respect – the number of visits that agronomists must make to each area, the time taken to resolve problems afflicting farmers whom they have supplied their technology to.  Since the state subsidises such purchases (micro-irrigation enjoys a 50% subsidy in the state), it has made the meeting of these parameters a pre-requisite if the company wishes to supply their equipment and services and avail of the subsidy (without which the prices become unattractive for farmers).

GGRC thus makes one organisation responsible for the success (or failure) of the farmer.  Having a separate agency for training (as it being lobbied for in Jharkhand) would create a multiplicity of agencies, which in turn would adversely affect farmers in the long term. The GGRC model has ensured that the cost per acre comes to around Rs.60,000-80,000 an acre, or Rs.15,000-20,000 for 25 decimals (which is just about a quarter of an acre), inclusive of training and hand-holding costs.

In Jharkhand, however, the expectation of a separate agency for training and tribal development (with indicative fees of over Rs.5,000 per 25 decimals), has made many NGOs flock to that state, because Rs.20,000 an acre is an extremely lucrative proposition indeed.  If the state fails to create a nodal agency which makes just one organisation responsible, it will lead to finger pointing in the future.  It could wreck the success of the pilot, making it unviable in the long run.

The third is creating a set of banking rules by which tribals can get loans from banks.  “Currently, rules do not permit a tribal from mortgaging his land,” explains M. Krishnamoorthy, deputy general manager and zonal manager, Ranchi Zone.  His bank has, however, decided that it will move ahead and finance loans to tribal-farmers for procuring the micro-irrigation equipment for their farms. “We do not see this as a risk, because half the cost is borne by the state government as a subsidy.  Giving a loan of Rs.16,500 against a quarterly cashflow of Rs.25,000 to Rs.40,000 is not a risk for the bank.  For this small a loan, I do not even need collateral. Moreover, it is a socially desirable activity,” adds Krishnamoorthy.

But the absence of such a facility, that allows a tribal to borrow against his land, can be a major hindrance to economic growth, especially in a state which is rich with mineral deposits, but whose people are poor. Almost 44% of its population falls below the poverty line (BPL), unable to have more than one meal a day.  Almost 67% of Jharkhand’s work force is engaged in subsistence farming, because the potential of water resources has not been exploited.  Hence only one crop has been grown each year, with very low yields.  If the rains fail, even that food is not available. Thus less than 10% of gross-cropped-area is irrigated, and 85% of the cultivable area is mono-cropped. Unlike Gujarat or Maharashtra where a small farmer is one who has 2 or less acres, almost 80% o0f Jharkhand’s farmers have less than half an acre.

The reason why tribals cannot mortgage their lands is because the state wanted to prevent non-tribals from acquiring the lands of tribals. This resulted in a invoking the law of unintended consequences.  As a result, tribal land commands a market price of less than a hundredth of the land belonging to non-tribals.  Consequently, banks too were prevented from mortgaging tribal lands.  That in turn has adversely affected the ability of tribals to borrow money and start an enterprise.  As a result, most tribals ‘lend’ their land to small businessmen who use it to start their own enterprise, giving a pittance to the tribal-owners in return.  Not surprisingly, the call of the Naxalites for such people can be extremely heady indeed!

The pilot programme has shown a way out of this dangerous ‘temptation’.  But a lot more needs to be done, to ensure a sustainable better life for the tribals.

Garware Technical Fibres could transform agriculture and fisheries in India

https://www.moneycontrol.com/news/business/companies/garware-technical-fibres-could-transform-agriculture-and-fisheries-in-india-3028621.html Garware Technical Fibres transforms India's agriculture and fisheries In some coastal areas, GTF has designed nets that actually allow the waves to bring in water...