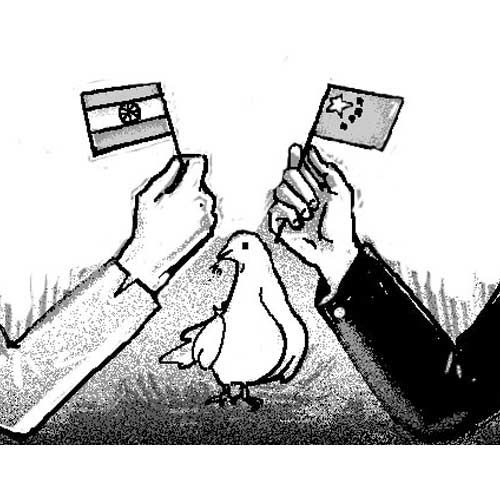 Within the next two months, one more delegation of senior educationists from India will travel through China, to work out modalities for having student-exchange-programmes between educational institutions from both countries [disclosure: the author will also be part of this delegation, not as a journalist, but as an educationist]. The initiative is more from the Chinese side than from the Indian.

After all, for almost 3,000 years, India and China together accounted for almost two-thirds of global GDP. Both saw a decline in their fortunes since 1640, thanks to colonisation as well as the industrial revolution.

That shifted the economic centre of gravity from the east to the west.  Both India and China are rediscovering their strengths again. Both now aspire to become global once again, China more sure-footedly than India. Businessmen on both sides of the border are discovering mutually beneficial opportunities.

At the same time, in an effort to promote better awareness of its people and its culture, and to understand India’s cultural heritage, China has been encouraging more tourists from its country to visit India. But issuance of visas to Chinese by Indian authorities has been a lot more difficult than getting a visa from Chinese embassies for Indian visitors, point out India-China watchers.

Yet, there is no denying that India will have to work out its own ways to build better relations with its largest neighbour with whom it also has a very long international border.

That could be another reason why China is keen on settling its border disputes with India. At recent meetings, where Indian journalists were given unprecedented access to the top generals of the People’s Liberation Army (PLA), this message was reiterated several times.

According to Major General Chen Zhou, director of the Academy of Military Science (AMS), the leading think-tank of China’s defence forces, “China has settled its land border disputes with 12 of its 14 neighbours. We now need to amicably finalise our borders with both India and Bhutan.”

When asked about the border incursions, spokesperson after spokesperson of the PLA said that the incident was blown out of proportion. “Please note, the borders have still not been either defined or demarcated,” says one.

“Do bear in mind that none of the so called ‘conflicts’ involved the firing of even a single bullet,” says another, implying thereby that unlike other border skirmishes India has witnessed with Pakistan, Bangladesh and Sri Lanka, the recent skirmishes with China have been the most benign.

What about the strategic ties China enjoys with Pakistan?  Off the record, spokespersons of the China military think-tanks admit that they are vexed at the flare-ups between India and Pakistan, and have been using their goodwill to pressure Pakistan to normalise ties with India. “It does not help us in any way to have a volatile and unstable neighbourhood,” says another senior colonel of the army.

During the discussions and the interactions that this correspondent had with local people, it was clear that India was in no way perceived as a threat. For the Chinese, India is a neighbour with which it has enjoyed centuries of good relations and remains the source of Buddhism.

Clearly, India will have to exploit this wellspring of goodwill to mutual advantage.