Home Analysis Solar power: 25 April could be a red-letter day! 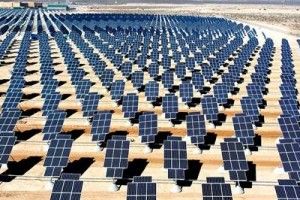 The scorching pace of solar power – I

In March 2016, Saudi Arabia stunned the world with an unusual announcement.

Its Oil Minister Ali al-Naimi stated the following at a Berlin conference: “I don’t think there is a more ideal country for renewables than Saudi Arabia, given its abundant sunshine, available land and plentiful sand, which is needed for making solar panels”. Of course, this won’t happen overnight, he added by way of clarification.  He expects consumers to continue using fossil fuel for ther next 50 years. But his statement that Saudi Arabia would make a foray into solar power was the last thing investors had on their minds.

In fact, should Saudi Arabia put its money behind solar power, expect the pace of growth for solar to climb frenetically.  Solar power is already expected to grow by 28% during 2016 (see chart).

Already, last year was a scorcher. 2015 ended with around 59 GW (giga Watt or 1,000 MW) of solar installed capacity (http://www.greenworldinvestor.com/2016/03/08/usa-china-and-india-could-power-93-of-incremental-solar-growth-in-2016/) .  This made it another record year in terms of solar PV installation, It represented a 700% increase from the 2008 annual demand. Clearloy, the solar PV industry has grown exponentiallyand is worth  more than $100 billion now.

2016 promises to be another double digit growth year . Various analysts put the growth of solar power in 2016 anywhere between 10-17%, to about 69 GW. Almost 93% of the demand will come from just three countries: India, China and the US.  Saudi Arabia’s investments could cause this number to flare up further. But why is Saudi Arabia moving away from oil? To understand its decision to begin looking to solar energy, it might be helpful to listen carefully to the utterances of Prince Mohammed bin Salman, grandson of the founder king of Saudi Arabia.

Just a few days ago, in an interview with Bloomberg Businessweek (http://www.bloomberg.com/news/features/2016-04-21/the-2-trillion-project-to-get-saudi-arabia-s-economy-off-oil?cmpid=BBD042116_BIZ&utm_medium=email&utm_source=newsletter&utm_campaign=) he pointed to the urgent need tfor his country to restructure its finances.  He was of the belief that his country should change fundamentally.  The alternative would be catastrophic.

It was only last year that the country’s managers discovered that thanks to rapidly falling oil prices, Saudi Arabia had witnessed a continuous (and precipitous) fall in its forex reserves.  Analysts believed that bankruptcy would be just a couple of years away. The oil price crash had resulted in a budget shortfall of almost $200 billion.  Historically, the country depended on oil for 90% of its budget requirements.  Now that was fast evaporating.

That could also explain why all eyes are now set on April 25 (three days away) when Prince Mohammed is slated to present his “Vision for the Kingdom of Saudi Arabia.”  That is when he is likely to unfold a plan incorporating widespread economic and social changes.

According to BusinessWeek, it includes

According to BusinessWeek, these moves “will technically make investments the source of Saudi government revenue, not oil . . .[so that] within 20 years, we will be an economy or state that doesn’t depend mainly on oil.”

Expect solar power to be a major driver. And wait for April 25!