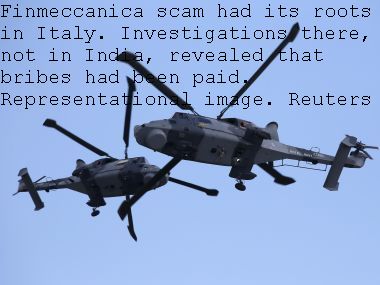 Slush around defence bribery deals: no major defence scam has resulted in a conviction

Last month, the Government of India announced that it was cancelling the Rs 1,800 crore deal with Whitehead Alenia Sistemi Subacquei (WASS). The reason: WASS is a defence equipment subsidiary of Finmeccanica, the company which is said to have bribed Indian officials and politicians in order to procure an order for helicopters.

This is because Indian laws clearly make a criminal of both the bribe giver and the bribe taker. Since the courts in Italy have established that Finmeccanica has given a bribe, it has been blacklisted. As a corollary, so goes the legal argument, its subsidiary has also been blacklisted. WASS thus lost a business, worth Rs 1,800 crore. That has resulted in a big setback to the plans the Navy had chalked out for deployment of these torpedos for its newly acquired submarines. Till the time a new vendor is identified, and deliveries made, the Navy will have submarines without firepower. A terrible state for any defence establishment to be in.

This is precisely what happened even with the Bofors deal. It was in April 1987 that Swedish Radio alleged that Bofors paid kickbacks to people from a number of countries, including top Swedish and Indian politicians and key defence officials to seal the deal. These revelations were picked up by the Indian media. Finally, the government blacklisted Bofors from doing any business in India.

The situation became farcical. Even worrisome. Bofors had already supplied the howitzers. But as it was blacklisted, it could not supply the shells. It took many years before the government could identify another company to supply them. The order wasn’t small. The Army needs around 15,000 – 18,000 rounds annually. Each round is expected to cost between $300-400. Thus Bofors lost a huge chunk of annual business.

In both cases, the bribe giver was penalised, but the bribe taker wasn’t. The legislators moved fast to blacklist and severely penalise the foreign arms supplier. But they allowed the wheels of justice to move terribly slowly where the bribe takers were concerned. And this is despite the fact that many of the alleged bribe takers were bound by an oath to office – that they would not accept bribes, and remain true to the laws of this country.

In any other law-abiding country, the government would have allowed the bribe giver to turn “approver”. It would have granted him immunity in order to catch all the bribe takers who had violated their oath to office. Coupled with circumstantial evidence, the testimony would result in quick conviction of the guilty. Thus defence preparedness would seldom get compromised, And almost all of those who stole from taxpayers (all bribes are eventually paid for by taxpayers) would be brought to book.

But the Indian government has not done this with any of its defence deals. It is almost as if the government does not want to bring to book any of the bribe takers. This is true of both the previous government and the present one too.

It is in light of this reluctance that the penalising and blacklisting of ‘tainted’ defence suppliers and their subsidiaries begins to acquire a totally new meaning. It is as if the government is penalizing them for allowing the details of the bribe to become public in their respective countries. The Bofors scam had its roots in Sweden. And the Finmeccanica scam had its roots in Italy. In both the countries, investigations there, not in India, revealed that bribes had been paid.

The penalty and the blacklisting could thus be interpreted as a warning:“You broke the omerta. You allowed the details of pay-offs to emerge. You could not keep this secret the way India has till now. Therefore, we do not trust you. Hence, we will no longer do business with you, ” is what the acts of the government seem to suggest.

The Government of India needs to set this image right. In fact, in none of the major defence scams (see table) has a culprit been nailed. Yes, there has been finger pointing. Yes, cases have been registered. And yes, some have been sent to judicial custody, and even granted bail. But they have not been convicted.

Take the Finmeccanica case, as an example. That bribes were indeed paid in the Finmeccanica deal was clearly established by an Italian court in October 2014. Bruno Spagnolini, who served as CEO of AgustaWestland, the helicopter manufacturing division of Finmeccanica, was charged with false bookkeeping (and participation in bribery). The Italian court sentenced him to two years in prison. The court documents pointed to several Indian bribe takers.

The middleman for the arms deal was Christian Michel. His lawyer offered to help India with information if it agreed to give Michel approver status and immunity. The offer was shot down. Yes, it did interrogate SP Tyagi, former IAF chief. But then, there is no clinching testimony, which can only come from a court approved whistleblower, or an “approver.”

Eventually, only the bribe givers will be penalised. Bribe takers in defence are seldom convicted. Nobody is made approver.

In India, this is not merely a case of bribe giving, or bribe taking. By cancelling defence deals which have taken years to prepare, and which are critical to the safety and security of the country, Indian investigators and legislators are actually weakening India. By aborting defence plans – the shells in the Bofors case, and the torpedos in the Finmeccanica case, it is the defence of India that is at stake.

India desperately needs a comprehensive policy on the way bribes should be dealt with. The present system stinks.