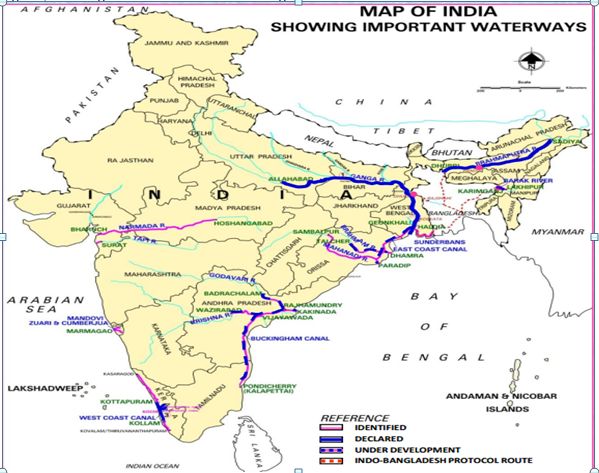 Expect India’s waterways to see a dramatic transformation within the next few years. On the anvil are 111 waterways as national waterways for navigation (though only some of them are often talked about – see map)

The government has decided to take up 30 of these waterways for development in the next three years. In fact, because these waterways could also find linkages with the ports of India, the shipping ministry hopes to connect the hinterland using these waterways as well, in addition to the roads and rail that most people are familiar with. This was stated by Rajive Kumar, secretary, shipping, ministry of shipping roads highways and ports, in an exclusive interview with Firstpost. Even then, freight using inland water transport (IWT) has been galloping ahead during the past few years. From 3 billion tone-km in 2004, it is expected to climb to 17.5 billion tone/km this year. Yet the potential is enormous, because even with these numbers, IWT accounts for just 0.56 percent of total inland transport (see table).

Kumar admits that the last two decades have seen the quality of water-flow in our rivers becoming poorer progressively. That was possibly because waterways were not on the national horizon for planning and connectivity. Hence making them navigable today can be a challenge.

Notwithstanding these hurdles, the government is looking at a couple of very interesting things. Currently, barges carry cargo of around 2,000 tonnes each along the Ganges – which is National Waterway 1. Kumar explains how, “with two additional handlings” (equipment for loading and unloading carge) the barges could be designed to carry as much as 2,500 tonnes, thus making them compete with freight trains which also carry 2,500 tonnes of cargo each. Around 200 trucks account for 2,000 tonnes of cargo while a single freight train accounts for 2500 tonnes. Since water transport is cheaper than rail transport on a per km/tone basis, and as rail transport is cheaper than road transport, the waterways will allow the government to reduce the freight cost and the time taken to transport goods as well.
It is now experimenting with innovations that would allow these barges to be powered with LNG (liquefied natural gas, from which a leaner fuel CNG is derived). These barges will be designed in such a manner as to operate in waters that have a depth of not more than 2.5 metres. Kumar expects the use of LNG on 2,500 tonne barges (which can navigate shallow waters) “to become feasible in three years time at least as far as National Waterways 1 is concerned,” he adds. That will allow the ministry to reduce freight costs further, in addition to using a cleaner fuel.

“Our rivers are mighty,” explains Kumar. “You cannot tame them. At best you can flow along them. So the less you opt for dredging, the better in the long run. Therefore I need low draught, high density barges,” And once this pilot plan works as desired, the ministry will have a roadmap which could be used to operate similar vessels and adopt similar strategies along other national waterways as well.

The new vessels capable of carrying 2,500 tonnes and navigating in shallow waters are being designed in India. “We are not importing them,” says Kumar. “We have hired the design firm, but we will get them built in India,” he adds.

Kumar expects tremendous interest from the private sector because “the government gives an incentive of 20 percent on the capital cost, for all barges, ships and vessels. So we intend to make full use of that,” he states.

Kumar is confident that of the 111 waterways “we should be able to get at least 30 [working] over the next three years, which can find traffic and run viably. Eight of these 30 will be taken up this very year. So you will be seeing a lot of activity and employment opportunities linked to these waterways.

The value of strengthening India-Russia relations