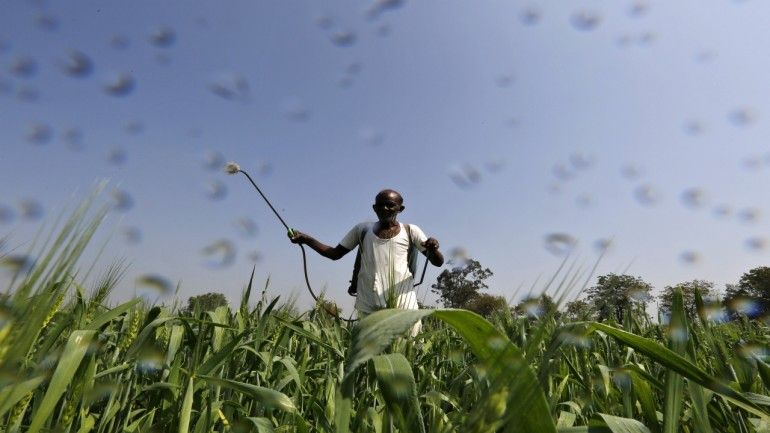 Project Neem –II  (part I can be found at http://www.asiaconverge.com/2017/07/gnfc-revives-the-glory-of-neem/

“What began as a CSR activity soon began blossoming,” says Dr. Rajiv Kumar Gupta, managing director, GNFC.  “We began callecting more and more seeds.  We had to think on our feet, and the possibilities kept multiplying.” For instance, GNFC’s immediate concern was how to deal with the neem cakes that were the residue of the neem oil extraction process. Normally soya oil cakes and cakes from other oil extraction processes are mixed with animal feed.  But neem’s peculiar aroma, and its immensely bitter taste, repel most animals.  The only animals which appear to be willing to chew on neem leaves are camels and goats.

So GNFC deicded to pack the neem cake into 12 kg bags and sell them as organic manure and pesticide. The next step could have been anticipated.  All the neem seeds collected by GNFC accounted for barely 5% of the total output of seeds in the state.  The percentage could be lower than 1% if one considers the textbook yardstick of 50 kg of seeds per neem tree annually.  Obviously, GNFC had to prepare for more seeds coming in soon as word spread, and collection systems improved.

So Gupta moved into phase two. He decided to move into other neem based products.  So he first identified key women from NGOs and SHGs and sent them to private soap factories to learn the art of soap-making.  That he was on the NSDC (National Skill Development Corporation) managing committee helped.  He got it to certify women completing their skill

development course at soap factories with certificates saluting them as soap makers. He then got them under GNFC’s own roof and asked them to help identify the things that must be done to make soaps in large quantities. “Ï was aware that throughout India soap making is largely a cottage industry operation.  Even large companies, sub-contract their operations to small units who then make soap.  I was trying to set up a large soap manufacturing facility unlike others,” heexplains. Of course, he had an advantage.  Since this project was meant to empower women, he got skills at a fraction of the cost that MNCs would have to pay.  And the social enterprise of his focus made his priorities a bit different too.

That also explains why he decided to offer a floor price for neem seed – at Rs.10/kg for three years.  He knows that without a guaranteed floor price, farmers will not grow that produce.  That is what Verghese Kurien also did. Gupta wants more trees to be grown, especially in all the neighbouring states.

One by one, he has moved into making a whole range of products – neem oil, neem based fertilisers, pesticiades, hand and face wash, soaps and even shampoos (http://gnfcneem.in/products). He first began selling them through select outlets in Gujarat, and then through web portals like the one GNFC itself has and through Flipkart.  He now wants to reach out to normal retails stores, though, as he admits, “I will have to increase my prices by at least 30% because the retail trade expects that kind of margin for selling goods.”  That should not pose a problem because currently, GNFC’s costs are almost a third or even less in producing neem based products.

As production begins to pick up, and as the demand for neem based products increases – it is bound to given the tremendous goodwill and loyalty neem enjoys throughout the country —  expect more neem trees to be grown over the next two decades.  This author’s estimate is that at least five million trees should come up over this period of time. It could be the biggest afforestation drive the country has seen. With the world itself moving towards nature-based products Gupta may be right in assuming that neem based products have a tremendous export potential.  That is why, his work with forensic laboratories of agricultural universities makes immense sense.  He knows he must put documentation in place.  And standards. And then get the government to set in motion laws that discourage the fraudulent use of the term neem.  GNFC has become the de facto custodian of the neem brand.

For Gupta the work has just begun. The neem project has begun creating wealth in a way nobody had envisaged before.  And the potential of neem to reduce diversion of fertilisers (estimates put it at 10-20%; see the video https://youtu.be/xxt2GLcaevI) suggests that India’s import of 60 lakh tonnes could fall by at least 15%.  Add to this the reduced use of urea thanks to soil cards and farmer education which encourages him to use other fertilisers.  That should reduce import by another 10%.  The rest of the imports may shrink thanks to the use of neem cake.

Neem cake has the unusual quality of acting as a fertiliser (because it is organic).  But the neem in it, reduces the flow of nitrogen to the plant, graduating its release and making the plant grow better and healthier.  The added advantage of its being a pesticide could mean a reduced use of synthetic pesticides.

The neem revolution has just begun.  Gupta and his team are keen to ensure that the dream becomes a reality. And if all goes well, according to the plans Gupta has laid out for the company, this division alone should add Rs.500 crore to GNFC’s topline.

https://www.moneycontrol.com/news/economy/policy/comment-farms-destroy-value-not-because-of-farmers-but-because-of-the-government-2521885.html Farms remain a value destroyer, not because of farmers but because of the government RN Bhaskar-- Mar 06, 2018 03:52 PM IST To some extent the...