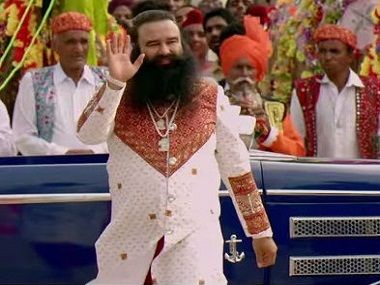 Is the government continuing to protect Gurmeet Singh’s Dera?

For the last few days, the media has been buzzing about certain “high-level” meetings taking place at the 700 acre enclave of the Dera Sacha Sauda (DSS) in Sirsa, Haryana.

The DSS, is, of course, the organisation that, over the past three decades, brought untold amounts of wealth and influence to the now convicted rapist Gurmeet Singh aka Baba Ram Rahim Insaan aka Pitaji. After the conviction and imprisonment of Gurmeet Singh, senior members of the DSS want to select the next head of the sprawling organisation. As things stand, the choice appears to be tilting towards his son. There appears to be no other contender for this post: At least for now.

The decision about the successor matters. After all, a huge amount of money is at stake. The DSS headquarters at Sirsa is reportedly spread over 700 acres, with shops, seven schools, colleges, three state-of-the-art hospitals, two posh hotels and two petrol pumps.

DSS has properties in Haryana, Punjab, Rajasthan, Himachal Pradesh, Chandigarh, Delhi, Uttar Pradesh, Madhya Pradesh, Maharashtra and Gujarat. It has centres overseas as well: Most notably in Australia, Italy and the UK. The DSS earns around Rs 1 crore per day from hotels, MSG foods, and selling products to devotees. Add to that, an estimated income of around Rs 1,000 crore from Gurmeet’s films and it becomes clear that the booty is extremely large indeed.

But tarry a moment.  Isn’t there supposed to be a clause permitting the government to take over the ownership and administration of companies, even not-for-profit companies registered either under the Companies Act or under state charity commissioners? For instance, in the Companies Act, the Company Law Board Tribunal has the powers to review any organisation.

It has to frame its opinion on two points:

(b) that to wind up the company would unfairly prejudice such member or members, but that otherwise the facts would justify the making of a winding-up order on the ground that it was just and equitable that the company should be wound up.

Similar clauses have been introduced by each state government to empower the respective charity commissioners to derecognise the charitable organisations who do not toe the line set by the government in its rule book and to take over its administration or its assets. So why is the government not taking over administration of all DSS assets and stripping it of its tax-free halo?

The trouble with the government — not just this one, but all previous governments as well — is that it has seldom used this law when it comes to people who enjoy political patronage.

Today, this political patronage extends to Hindu organisations (and Hindu-adjacent organisations) as well. As Lord Meghnad Desai pointed out in one of his columns, had the DSS been “Christian missionaries, they would have to register, be subject to audit and FCRA (Foreign Contribution Regulation Act) rules.”

But in the case of the DSS, which allegedly abetted rape, castration and even murder, there is ample ground for the government to take over its assets and banish the current administration. Is the government not doing this because the DSS is a vote bank?

This, in turn, leads to a very serious question. Can the rule of law be dependent on vote bank considerations? What about equality before the law?

In fact, this is when one realises that just as it was the courts which had to intervene and take up the rape case and convict Gurmeet Singh, it may fall on the Supreme Court to take suo motu notice of the government’s inaction in banning the DSS.

This – according to some – might amount to judicial overreach. But when the legislative and the executive branches abdicate responsibility, the judiciary has to step in to protect the concept of equality before the law and safeguard human liberty.

Also bear in mind:  There were reports of girls being raped, men being castrated and murders being sanctioned. All acts that endanger life and liberty.

And there is also the extremely grave charge of sedition: Of private armies, reportedly nurtured by the DSS, attempting to thwart the arrest of the self-proclaimed godman.

If the executive and the legislative do not protect our constitutional rights, the courts may, once again, be forced to step in and save the day.

http://www.freepressjournal.in/business/going-beyond-budget-2018-with-dea-secretary-subhash-chandra-garg/1216158 Budget 2018 is more comprehensive than people have imagined  -- says Subhash Chandra Garg This year’s Union Budget is the last budget before the 2019...