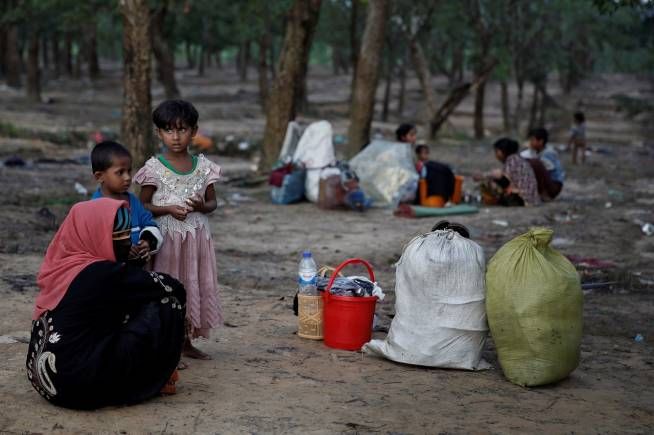 Is it a revolution, or the ruthless exploitation of the poor?

It is quite possible that the revolutionaries of J&K have been agitating because they have been asked to agitate. And the fact that the children of rich folk did not participate in the agitations does turn the needle of suspicion to the wealthy themselves.

On  October 28, 2016, Mehbooba Mufti, chief minister of Jammu & Kashmir (J&K) made an incisive observation that no other politician of that state, or even from the centre, had ever dared to make. She stated that  “Among all those killed or injured, 99 percent were small kids, not one from the rich family, not a single child of those leaders have been injured, only poor kids”

The statement was damning.  Surely, if there is an insurrection, the leadership for such movements often comes from intellectuals and people with deep pockets. And many of the intellectuals come from rich families where they have benefitted from better education.  That is where they get their initial ideas (and funding) which later become sharply articulated views. The French Revolution had its share of intellectuals – many from rich families.  So did the Spanish Revolution.  Ditto for the Russian Revolution, or the Great Revolution of China. True, intellectuals become inconvenient after some time.  But that is usually when the revolutionaries have themselves moved into positions of power, and are not willing to be questioned on their manner of functioning.

The rich instigating the poor?

And then comes the ‘eureka’ moment. It is quite possible that the revolutionaries of J&K have been agitating because they have been asked to agitate. And the fact that the children of rich folk did not participate in the agitations does turn the needle of suspicion to the rich people themselves. Could it be that the rich folk in J&K have actually been coaxing, and even compelling, the children of the poor to offer themselves as fodder for the Revolution?

The idea seems absurd.  Till one studies the tables on land holdings provided by Census 2011. The chart alongside relates to land holdings of tribals, and the way the numbers and the areas have diminished between the findings of Census 2005-06 and the one taken in 2010-11. Similar figures for all landholdings are not available, so we will have to make do with what is available.

Anecdotal evidence does suggest that almost every politician of all hues and politicical affiliations has seen his or her own land-holdings expand over the years. The incremental land must have come from somewhere.  Anecdotes suggest that it comes from the underprivileged, who have now become virtual bonded labour to the rich landlords-cum-politicians.

In fact, there seems to be a strong correlationship between states where there are major pockets of insurrection, and the way the locals (usually tribals) have been dispossessed of their lands.  It is similar to the story of Janno devi of Jharkhand that was featured recently in these columns (http://www.moneycontrol.com/news/india/why-protection-from-markets-leads-to-rip-offs-an-example-from-tribal-india-2417491.html).

She had land which she could neither mortgage nor sell at a decent price because it was tribal land.  Since tribal lands cannot be sold to non-tribals, banks are reluctant to accept them as mortgage against loans.  That means that small income tribals cannot get loans against their most valuable possessions – viz land.  Non-tribal lands can be as much as 100 times the value of tribal land, because it has a market value and is transferable.  So Janno devi ended up giving her land to a wealthy tribal leader to start an enterprise on it.  She was reduced to becoming a brick carrier on her own land.

It is likely that something like this is happening in the states of J&K, Odisha, Mizoram, West Bengal Tamil Nadu, Andhra Pradesh, Maharashtra and even Karnataka. Each of these states has witnessed pockets of insurrection.  It could be Naxalism in land locked states, or it could be calls for Independence in border states.  In each of these states there is increasing evidence of exploitation – either by illegal mining in states like Maharashtra, Andhra Pradesh and Karnataka (http://www.asiaconverge.com/2017/04/sukma-killings-naxal-violence-illegal-mining/) — or illegal forest produce diversion (sandalwood? Remember Veerappan, the Robin Hood  in Tamil Nadu and Karnataka), and other produce in Odisha.

Unfortunately, people who cannot find a market value for their lands, are often at the mercy of other wealthy and powerfully connected tribesmen. The desperate are thus left with no option but to submit to the demands of the powerful, including giving up their land.  Then when a little cash incentive comes along, with a promise of more by the tribal leader who has control over their land, and a bit of coercion as well, converting the young lad or girl to join the ranks of terrorists isn’t difficult. Poverty, disenchantment and carefully structured disinformation can be a heady mix.

Most of the rich have seen their land holdings swell (even if one does not consider the type of ownership which comes with power of attorney documents and social coercion as in Janno devi’s case referred to above). In fact is that the terrorists themselves are financed by rich illegal miners and orchard growers.  This is what has been happening in Jharkhand.  This is what is likely to be happening in J&K as well.

General Ata Hasnain recognised this quite well when he was in charge of operations in the J&K region.  He knew that unless the young boys and girls of that state were given meaningful jobs, they would be easy fodder for people who offered them a bit of money and a bit of incendiary reasoning to justify hatred and killing  (the occupation force, the call of jihad are strong motivators). Most of the families of the rioters have been staying on lands, once owned by their grandparents, but now controlled by rich orchard growers. They have little option but heeding to the demands of their ‘landlords’ and persuaded by some money as well.

General Hasnain wanted to work with NGOs to help create jobs, improve education and even coax local Kashmiris to start small enterprises even if they had no land. (Disclosure: this author was briefly involved with the General’s efforts in trying to reduce terrorism through job creation). To some extent, this soft strategy worked.  Acts of terrorism dipped.  But when the General was moved out of J&K, his plans were not carried through by both his successors as well as the new political establishment. Result, disaffection grew. The heavy hand which has quelled insurrection could provide a reprieve.  But unless this is backed up with education and jobs, it could raise its ugly head again.

That is why the plaintive appeal of Chief Minister Mehbooba Mufti, calling for more attention to education and jobs, is a cry which must not go unheeded. The consequence of ignoring this call could be very painful for all concerned.

The inability (or unwillingness) of many state government to provide tribals with title deeds for the lands they hold is another problem.  While digital mapping of land holdings has touched some of the major villages, it has not touched the areas where insurrection is much in evidence.  Much of the land holding is by way of vague documents with the local tehsildar, who is often a puppet in the hands of the powerful. The failure of the Centre and the States to give title deeds to all land owners is another reason for the insecurity which often gets exploited by the financiers of terrorism.

The Census figures are worrisome pointers to the state of governance in India. This is especially so when it comes to tribals and territories in which terror groups are known to operate.  These are the states that need good roads, good schools and hospitals.  But above all, they need land title deeds.  They need a mechanism whereby the government allows them to exit land at a market value not at a predatory/distress price.

The failure of the government to do this even after 70 years of independence makes one suspect that many politicians are themselves beneficiaries of this system of exploitation and deprivation.  Most of the members of the judiciary are not even aware of the magnitude of this problem.  And most social activists too are silent about this — partly because many of them got their finance from groups which used to fund terror groups in the first place.

Mehbooba Mufti is right.  Even if the lands cannot be taken back from the rich, the least that should be done is to provide education and skills for jobs that the local youth could take up profitably  and with dignity. Not doing that could trigger more pain and insurrection in times to come.