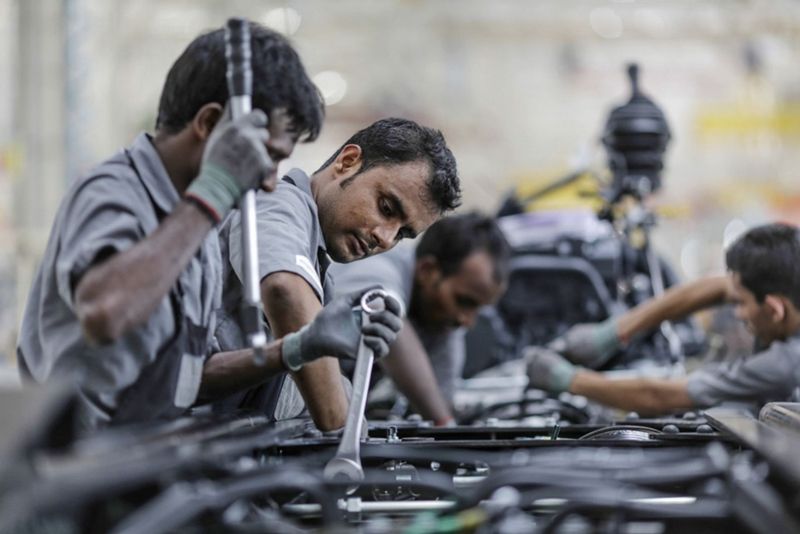 The prime minister has lauded the efforts of people to seek out some form of self-employment.  One example he gave was that of a pakoda-wala selling food on the streets. As a recent International Labour Organisation (ILO) document pointed out, “The rapid growth of ICT services in recent years in some emerging countries, notably India, has not generated enough employment opportunities for the large majority of the population (Ray, 2015).”  As the chart alongside shows, India has one of the highest percentages of informal labour – higher than even Pakistan.

“Within market services, informal employment is particularly common in the accommodation and food services sector in all income groups, and in wholesale and retail trade in lower middle-income countries. In some Asian countries, such as Indonesia, informal employment is predominantly driven by the wholesale and retail trade sector, which employs mainly women and therefore constitutes an important source of vulnerable employment for female workers. Therefore – as further elaborated later in the chapter – a shift of employment from agriculture to these distributive services does not necessarily lead to a decrease in the incidence of informality,” adds the report.

The problem with India’s planners is that they have not focussed on quality school education, which provides the greatest flexibility in helping people migrate from informal to formal sectors.  As pointed out by these columns – repeatedly – India has spent more time fudging statistics relating to school education, than focusing on outcomes (http://www.asiaconverge.com/2018/02/india-harms-demographic-dividend/).  The result, even after 70 years of independence, school education sucks!

The second reason is India’s inability to exploit the growing demand for medical tourism on the one hand and general tourism on the other.  Short-sighted measures like the CRZ regulations prevented the development of coastal holiday spots, leisure boating nad cruises. The inability to strengthen the law enforcement and adjudication arms of the government made travel within India a bit riskier than travel to countries like Singapore, Thailand, Malaysia, Sri Lanka or even Nepal. A booming tourism industry is a force multiplier in creating non-agricultural jobs of a permanent nature and in generating huge economic wealth.

The licence raj in the granting of permissions to start schools and medical colleges only helped crimp the country’s potential for creating more medical professionals.  Not surprisingly, just the capitation/donation amount to be paid for medical education in India often hovers around Rs.1 crore per student, let alone high annual fees as well.  The beneficiaries were politicians and those close to them who started that huge money-making racket called medical education.  Compare this to fees in China.  A five year medical education course – along with residence – could cost a student around Rs.15-20 lakh.  The quality of education imparted is definitely superior to that offered by most medical education centres in India.  And the facilities offered compare with the best in the world.

The government’s solutions smack of expedience, at the altar of competence and liberalization. Mercifully the government is now planning to abolish this licence raj for medical and school education. But that is only a half measure. It is not enough. Even though education is a state subject, income tax laws are powers that lie with the central government.  If the finance minister wants, he could just remove the tax exemptions to trusts that fail to see proper education being imparted in their schools.

The finance ministry also has powers to add back taxes for earlier years, in case the trusts fail to prove that the money meant for education was utilised properly.  The “properly utilised” could be easily be determined on the bases of outcome tests given to passing out students.  That could pave the way for transferring the educational institutes from an incompetent trust to a more competent one.

But the will to force such changes in matters as crucial as education and healthcare just isn’t there. The government loves announcing doles and granting favours.  It has been found lacking in its ability to demand accountability.

It is this absence of accountability which has caused its law enforcement and its judiciary to wilt. It is the inability to demand accountability which allows governments to introduce laws that seek to leaglise money-laundering. How else does one explain the attempt to retrospectively change the Foreign Contribution Regulation Act (FCRA) possibly to prevent investigation into foreign funds received by political parties in India?  This attempt to modify FCRA has prompted organisations like the Association for Democratic Reforms to file a writ Petition (W.P.(C) 131/2013)  before the Delhi High contesting the move. But that is a subject for another article.

As a result, the entire edifice meant to protect citizens now becomes one which protects politicians and other powerful persons.  The worker is forgotten.  The future education of the masses is overlooked (http://www.asiaconverge.com/2018/02/india-harms-demographic-dividend/).