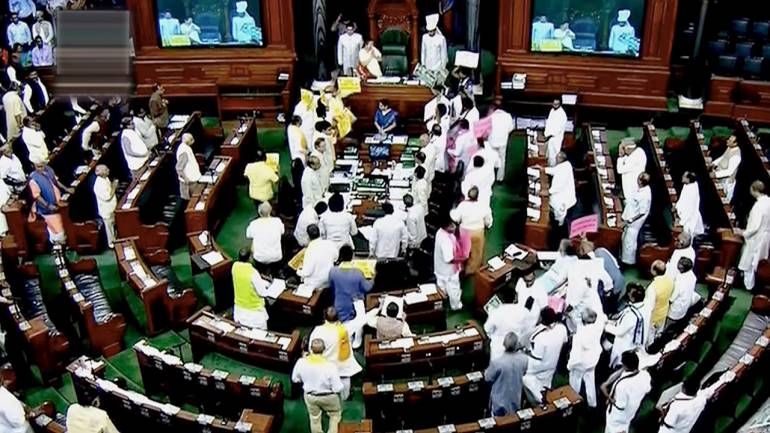 Corruption and legislative filibustering could cripple democracy in India

A major development that took place last week could actually alter the way India functions both as a democracy and as a country which believes in the principle of law and justice.

It has much to do with the uproar in Parliament that prevented any discussion to take place.  That gave the government the justification to push through the budget bill without any discussion taking place.

Whether the uproar was a collusive attempt on the part of legislators to push through the budget bill, or something that the ruling government had been trying to cope with, is something one could discuss and debate unendingly.  But the passage of the bill as a money bill (which allows the government to take the combined strength in both houses to push through a bill without debate) is both curious and worrisome. The first public manifestation came in the form of a tweet from one of India’s most respected economists – Ajit Ranade.  He referred to the backhanded method by which the government had actually passed a bill which allowed it to modify the FCRA (Foreign Contributions Regulations Act) with retrospective effect.

These columns had referred to such a development taking place almost a month ago (http://www.moneycontrol.com/news/business/comment-from-pnb-to-mallya-to-farm-income-india-enables-corruption-2510203.html).  The author had raised the question:  Ïs the FCRA being amended retrospectively?

The author’s fears were based on an emailed letter EAS Sarma, former Economic Affairs Secretary, Government of India, had written to the finance minister Arun Jaitley on 3 February 2018 (see pix of the first page alongside, and the full email at http://www.asiaconverge.com/wp-content/uploads/2018/02/2018-02-16_EAS-Sarma-Retrospective-amendment.pdf). The letter refers to the government’s alleged moves to introduce through a money bill an amendment to modify certain clauses of the Foreign Contributions Regulations Act (FCRA) with retrospective effect.  The move, said Sarma, appears to be to “condone the illegalities committed by Congress, BJP and a few other political parties by unethically accepting political donations from foreign sources, though prohibited under that Act. This, in my view, is not only illegal but it runs counter to the national interest, making a mockery of your so-called campaign of bringing in electoral reforms and enhancing honesty in the electoral system.”

The email letter goes on to say “To amend an existing law retrospectively to permit the political parties to accept donations from foreign companies raises serious concerns about the government’s intentions vis-a-vis the likely influence of foreign agencies over the electoral process in India and its likely adverse implications for the national interest.

Both FCRA of 1976 and FCRA of 2010 rightly prohibited political parties and their members from accepting donations from foreign sources. The Representation of the People Act echoed these prohibitive provisions. It goes to the credit of the Parliamentarians at that time to have thought about the deleterious implications that foreign donations could have on the political parties and their implications for the national interest.

Despite such clear legal provisions, both Congress and BJP blatantly sought and accepted donations from foreign sources year after year.

I, along with Association for Democratic Reforms (ADR), filed a Writ Petition [W.P.(C) 131/2013] before Hon’ble Delhi High Court contesting the same. The latter pronounced their judgement on 28-3-2014 (copy enclosed) upholding the contention in our WP and directing the Union Govt to act against the political parties within six months.”

The government did nothing, and was now trying to frustrate the Delhi High Court judgement by pushing through an amendment to the FCRA with retrospective effect.

Almost immediately thereafter, on 15 February 2018, the Supreme Court of India observed that the legislature cannot overrule judgments by amending a law retrospectively, saying this will amount to violation of the principle of separation of powers among the three organs of the state, which is impermissible. A two-member bench – comprising Justices Madan B Lokur and Deepak Gupta — said that the legislators were entitled to amend the law to remove defects pointed out in a judicial order but the new law could not be implemented retrospectively as it would amount to nullifying the judgment.

“A judicial pronouncement is always binding unless the very fundamentals on which it is based are altered and the decision could not have been given in the altered circumstances. The legislature cannot, by way of introducing an amendment, overturn a judicial pronouncement and declare it to be wrong or a nullity. What the legislature can do is to amend the provisions of the statute to remove the basis of the judgment,” he said.

Though the judgement related to a matter challenging the constitutional validity of amendments brought by the Karnataka assembly in Money Lenders Act and Pawn Brokers Act, the relevance of this judgement to the FCRA matter cannot be ruled out. The amendments were brought in 1998 but were implemented retrospectively to overrule the 1995 HC verdict, which held that the government should pay interest on security deposit as there was no provision to deny it to money lenders.

With EAS Sarma’s PIL now before the Supreme Court, the retrospective amendment of the FCRA could also come into national focus.

What could add to the government’s discomfiture is the loss of two key seats in the by-elections in the critically important state of Uttar Pradesh.  All of a sudden, the spotlight is back on the government’s ability to win the forthcoming 2019 general elections.  While it would be premature to write off the current government, some stray winds of dissent arte already becoming visible.

First, watch the no-confidence motion that has been put into motion by the Telegu Desam party – a former ally.

Second, watch the manner in which the SP and the BSP – for long at loggerheads – have option to form a common front to challenge the BJP in all forthcoming elections in the state  Media analyses of poll numbers based on past performance, does underscore the fragility of the current position.

In a way the government brought this upon itself with the cow slaughter ban followed by the ban on buffalo slaughter as well.  While moves are being made to assuage flared tempers, the damage has been done.  Suddenly, the Dalits and the Muslims are finding common ground to challenge the reckless acts of the government.  In a way, it – once again – points to why a government in India enjoying an absolute majority in Parliament is often prone to taking decisions that may not be in the best economic interests of the nation (https://www.moneycontrol.com/news/business/economy/comment-are-strong-governments-bad-for-the-indian-economy-2528037.html).

The coming months will be testing times for India.  At the centre will be tussles on two major fronts.  First, there could be a tussle between the legislative and the judiciary, possibly with the FCRA amendments becoming the eye of the storm that could follow.  Second, the way the opposition manages to form a united front to take on the government.

There is a third storm coming up.  It revolves around the manner in which the government is trying to de-legitimise the passport as the primary document for identification.

But  more on that later.

Tripura likely to see a business boom but challenges remain

https://www.moneycontrol.com/news/business/economy/tripura-likely-to-see-a-business-boom-but-challenges-remain-3593901.html Business could boom big time in Tripura, but challenges remain Chief Minister Biplab Kumar Deb is optimistic about improving the quality of rubber production as...