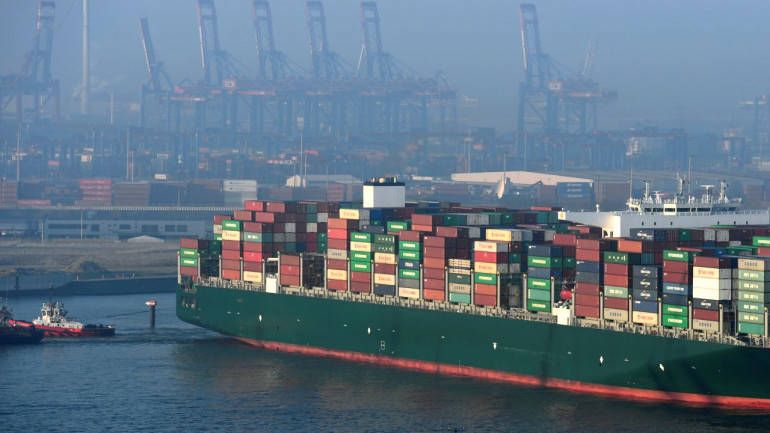 Both companies have been astute in the selection of vessels they own, and have shown tremendous resilience in charting their course during tough times. But the finance ministry continues to tilt policies in favour of foreign flag shipping vessels.

In many ways, there are similarities between Great Eastern Shipping (GE) and Shipping Corporation of India (SCI).  Both are the great survivors on the Indian shipping scene.  Despite turbulent times in global markets which have seen giants like Maersk bite the bullet, both GE and SCI continue to hold their heads above water.

One reason for this is that they have well diversified fleets.  Take a look at the feet that GE has (http://www.greatship.com/business_fleet.html). It has crude oil carriers, product carriers, LPG carriers and dry bulk carriers.  Collectively, it has 49 ships which account for 3.98 million DWT (dead weight tonnage).

SCI too is well diversified (http://www.shipindia.com/fleet/fleet-profile.aspx). It too has tankers (for crude oil, products, LPG, LNG, and VLCCs). It has bulk carriers, liners and offshore supply vehicles.  Collectively, it has 63 vessels with a combined DWT of 5.68 million tonnes. But some of its vessels are very old.  They are now being scrapped.

Having a diversified fleet helps because when one type of cargo faces difficult market conditions, another vessel type helps keep business afloat.  Both companies have been astute in the selection of the vessels they own, and both have shown tremendous resilience in charting their course during these tough times for global shipping.

Both are also beneficiaries of India’s coastal traffic. This has grown in recent years essentially because more ports and terminals have begun to dot India’s 7,500 km coastline, and also because linkages with the hinterland have become more effective and meaningful.  The role of the newly formed Indian Ports Rail Corporation Ltd (IPRCL) which was created by the shipping and ports ministry under Union Minister Nitin Gadkari, cannot be underestimated.

But there are undeniable differences between GE and SCI. GE remains a darling of stockmarkets.  Its share price has enjoyed market confidence and have moved by not more than 1.8 times from its low during the past four years.  SCI, on the other hand, has had a more turbulent stockmarket reception. Its shares have moved 2.86 times from their low levels.  This is despite SCI having a larger tonnage and more ships (some are being scrapped), and accounts for a higher turnover of Rs. 347 crore last year, compared to GE which had a turnover of Rs.206 crore.

But when it comes to operational financial parameters, GE beats SCI on many fronts (see chart).

There are three reasons why GE has performed better than SCI.  First. SCI is a government owned company, yet does not get the slightest benefit from the government in terms of orders or tariff preference (http://www.asiaconverge.com/2018/10/sci-charts-its-way-through-choppy-waters/).  It is possible that private sector GE could afford to be nimbler and faster to cater to market demand even with a smaller fleet. Anoop Kumar Sharma of SCI disputes this.  “On the operational front, we match the best ratios that the shipping industry can boast of.”  But the fact remains.  GE has performed better.

Second, and this could be the key reason, SCI is a lot more vulnerable than GE.  This is because it lacks the ability of sailing ships under foreign flags, because it is government-owned.

If the government were to remove the little reservation that Indian ships enjoy for carrying coastal cargo, SCI would be a sitting duck.  It would find itself outpriced and outmanouvred by ships plying the coastal waters under foreign flags (http://www.asiaconverge.com/2018/10/indian-shipping-grows-overseas-not-in-india/ ).

Second, unlike international aircraft, the finance ministry insists that crew of Indian flag ships must pay income tax. Crew of foreign flag vessels are exempt from such taxes.  This adds to the crew cost of Indian flag vessel owners by as much as 30%.

As long as India’s coastal cargo is reserved for Indian flag vessels, these handcaps can be coped with.  But once the reservation of Indian shores for Indian flag vessels is removed, companies like SCI may have to fold up and become economically unviable.  GE still has the option of converting its ships to foreign flags, but SCI doesn’t.

That is where being the flag bearer of the nation can be a great disadvantage.  True, whenever there is a disaster – evacuation of Indians from a war torn area, or bringing in oil from volatile areas like the Hormuz Strait near Iran —  SCI is called upon by the government to help the nation out. But it does not get any concessions for doing this.  Its payments are in accordance with industry benchmarks.

SCI does not even have the flexibility of buying ships when prices are low and selling them in international markets when prices are high.  Trading in ships is frowned at by the finance ministry.  In spite of that, SCI has managed to invest in four (secondhand) LNG tankers in association with Mitsui OSK, K Line and QShip.  But whether it will be allowed to sell them at a profit remains a question mark.  That is why, to date, almost all ships scrapped by SCI have been sent to scrap-yards.  One reason was that the ships were too old to get re-certified as vessels fit for sailing.  Another reason could be the finance ministry’s distaste for trading operations by government owned companies.

The government’s reluctance to protect Indian shores for Indian vessels is one reason why Indian shipowners have seen an increase in fleet size, but many of the ships remain under foreign flags.  GE has chosen to keep all its ships under Indian flags for now.  But it too will switch over to a foreign flag should the protection for Indian ships go.  SCI may have to close shop.  That will be a terrible misfortune, because it is one PSU that has managed to remain profitable year after year (except for four years).

The finance ministry’s inability to consider these financial handicaps that Indian ships face will end up hurting India’s interests in a big way.  It will be a reversal of Make-in-India, and could be terribly shortsighted strategically.

Market conditions for shipping have been terrible during the past few years.  But India just made the climate riskier and the environment inimical for the Indian shipping industry.

Cattle slaughter ban missteps may be a factor in the BJP’s...

https://www.moneycontrol.com/news/politics/comment-cattle-slaughter-ban-missteps-may-be-a-factor-in-the-bjps-electoral-woes-2579681.html Cattle slaughter ban and politics It will be interesting to see how the ruling party overcomes the grave mistakes it has made in the business...