Home Policy Watch So, in the past four years, there was no unemployment 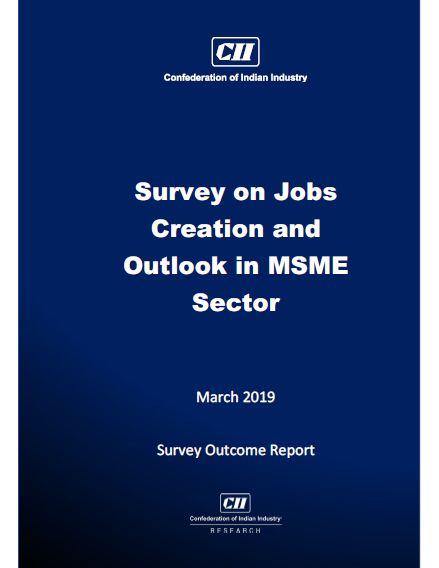 Zero unemployment during the past four years? Wow!

Last week, on 8 March, 2019, almost unexpectedly, the Confederation of Indian Industry (CII) came out with an unusual report titled “Survey on Jobs: Creation and Outlook in MSME Sector — March 2019 — Survey Outcome”.  Nothing unusual about the CII coming out with a report.  It does so all the time.

Yet, the subject of the report and the timing of its release were both odd.  CII has seldom done job survey reports.  There are better surveys by the likes of the Labour Ministry and the NSSO. And to release the report just a few days before election dates were to be announced (they were finally announced on 10 March 2019) also raised eyebrows.

The CII says, “The employed total labour force in 2017-18 is estimated at 450 million. The CII survey indicates an increase of 13.9 per cent in net jobs created, over the last 4 years, i.e. an increase of 3.3 per cent p.a. (compounded growth rate). Extrapolating this growth rate on the total labour force (450 million) implies 14.9 million jobs created per annum. On the other hand, assuming a more conservative growth of 3.0 per cent, the extrapolated jobs addition works out to 13.5 million jobs. The assumption of 3.0 per cent growth assumes that employment growth in MSMEs is likely to be higher relative to the larger firms. The overall job additions therefore, can be estimated at 13.5 – 14.9 million per annum (see table)”

This means that employment generation was well over the 12 million mark each year.  This represents the minimum number of jobs that must be created each year. That, in turn, means that there was just no unemployment in the country.  All those looking for jobs found them. Happy days, indeed!! Wow!

But trade unions aren’t so sanguine.  One of them categorically states that the CII report does not take into account the jobs lost in just the powerloom and construction sectors – especially after demonetisation. Ditto for jobs in the leather and beef industry. The unions say that the numbers do not reflect ground realities that are visible to the naked eye.

But if it was so easy for the CII to get this data, why couldn’t the government? After all, it has more resources at its command than the CII.  Moreover, the government’s tax and financial machinery can corroborate such findings easily. That would have been more reliable, timely and authentic.

But that was not done. And there could be three reasons for that.  First, maybe the data from government sources did not match the findings of the CII.  The latter was more acceptable.  Hence the former was jettisoned.  A second possibility could be that the government believes that its officers are terribly inept at comprehending and analyzing data.  The third reason could be the government’s aversion to making data public.

The third possibility gains credence if one observes how the government has actually got the websites of the Lok Sabha and the Rajya Sabha to exclude charts and tables giving financial or economic data.  Thus, you have the answers without the corroborating data. That is data the public is supposed to have. This is the first time in history that annexures to Lok Sabha and Rajya Sabha answers have been suppressed.  It has become so serious that even data regarding frauds committed each year at banks is no longer available on the Lok Sabha  website (http://www.asiaconverge.com/2018/08/banker-scams-ter-and-visible-hand-make-merry/).

All the three explanations above are serious enough to warrant a national debate.  Each of the reasons provides enough cause for heads to roll. But that won’t happen because such a move would confirm the government ineptness or collusion.  Both conclusions are damning.

The CII report, on the other hand exudes confidence in its numbers. The report states that the job survey of firms in the MSME sector, the largest ever in recent times, shows a Net Jobs Creation growth of 13.9 per cent over the last 4 years. The survey spanning over 105,347 firms primarily in the MSMEs sector, was undertaken in more than 350 industrial centres spread across 28 States. The growth in jobs in this space was led by Maharashtra, Gujarat and Telangana (see chart).

Says Chandrajit Banerjee, Director General, CII.   “The survey indicates that the top job generating sectors were Hospitality & Tourism followed by Textiles & Apparel and Metal Products, during the past four years. Machinery Parts and Transport & Logistics were the next significant job creators. The survey also reveals that the Micro enterprises were the largest job creators in the past four years and will continue to be so in the next three years.”

R N Bhaskar 29 June 2015 Australia is in the final stages of concluding a Comprehensive Economic Cooperation Agreement (CECA) with India.  It also hopes to...