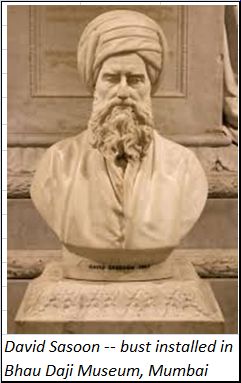 Recalling the legacy of David Sassoon to Mumbai To understand more about David Sassoon, one has to go back in history to the origins of Bombay – now Mumbai.

As history books tell it, Bombay comprised seven islands. They were captured from the Silhara dynasty in 1534 by the Portuguese, who had little use for them, except as naval outposts to observe ships coming into the territory called India. These islands were handed over to England as part of the dowry of Catherine of Braganza when she married Charles II in 1661.

Charles II, in turn, rented the islands to the East India Company in 1668 for £10 a year. By 1845, the islands had been merged into one landmass by means of multiple land reclamation projects. The last islands to be merged were the Trombay and Salsette that lay to its North-east and North respectively to form Greater Bombay.

In 1660, Bombay had a population of just around 69,000 – though some records show it as 16,000. The East India Company developed jetties along Ballard Pier. They were licensed to the Parsis – who were fair, spoke English, and began trading with Britain.

Around 1830, Bombay became home to someone whom the Parsis saw as an interloper – David Sassoon (October 1792 – November 7, 1864). He was a Baghdadi Jew, earlier the treasurer of Baghdad (1817-1829) and a licensee for British textiles in the Middle East.

Sassoon got his education in Hebrew, and could not speak English well.  Yet he managed to become a big trader in Bombay doing big business with Great Britain.  One reason is that when he decided to emigrate to Bombay along with his family – anti-Semitism was rearing its head in Baghdad – he asked his British principals if he could continue trading in textiles in India as well.  This made him intrude on a turf that the Parsis considered their own. Not surprisingly, Sassoon found it difficult to get berths at the jetties around Ballard Pier.

So he decided to design and build his own port instead – now known as Sassoon Docks, used largely by fishing boats and trawlers. It was built in 1875 and owned by the eldest son of David Sassoon – Albert Abdullah David Sassoon, but more popularly known as Albert — the landowner of Bombay (see family tree below)

).  You can also find Albert’s statue towering over almost everything in the centre of the Bhau Daji Lad Museum in Mumbai (http://www.bdlmuseum.org/)

Sassoon Docks was the first commercial wet dock in Western India and helped consolidate Sassoon’s hold over the cotton trade. Even the British liked the design of the port so much, that they used it as the template for making the Princes Dock in Bombay Presidency some decades later.

It must also be remembered that the American Civil war choked off supply of cotton from that continent.  Sassoon, who had excellent trading connections with Lancashire, suggested that he could solve their problems by exporting cotton from India.  Naturally, the trade was lucrative and the Parsees, Gujaratis and Sassoon all tried to get their share of this business.  But with his new port, which also had railways lines reaching inside the port complex, Sassoon had the edge.

But even before this materialised, Sassoon had already begun trading, like the Parsis, in Chinese silks and opium-export.  Once again, he was so successful in this opium trade, that when the opium wars began, a truce finally struck, and the Hong Kong Legislative Council document was signed in March 1887 (https://www.legco.gov.hk/1886-87/h870325.pdf), the names of the Tatas and the Sassoons figure there.

In fact, the Sassoons contributed significantly to the prosperity of East India Company as well because its trade with China was crucial in the larger scheme of the 18th century’s global trading world (https://www.gatewayhouse.in/bombay-and-the-founding-of-shanghai/).

Even today, you will find a Sassoon street in Hong Kong, and the Fairmont Peace Hotel (built by David Sassoon’s grandson Victor) in Shanghai. But Elias key focus remained export of opium and cotton from India to China, and he enjoyed a near monopoly over the opium trade in territories as far as Yokohama, Nagasaki, and other cities in Japan. But what really made David Sassoon extremely relevant to Bombay was his quick realisation that his fortunes lay in making fabrics in Bombay, instead of importing them from Lancashire.  By the 1860s he had set up as many as 17 textile mills in Bombay employing some 15,000 to 20,000 workers.  By this time, Bombay’s population too had swelled to 773,196  (D’Cunha, Jose Gerson (1900). “VI The Later British Period”. The Origins of Bombay, Asian Educational Services).  This means that the Sassoons were not only the largest textile mill owners in India, but were also responsible for supporting over half of Bombay’s households either by direct employment, or indirect trade.  It is almost coincidental that it was around the same time that Jamshetji Tata also decided to set up Empress Mills in Surat in 1874.

David Sassoon did not speak much English.  Yet his wealth and his influence got him a naturalised British citizenship by 1853.  As accounts in Bombay Times in 1838 show, he was already a major magnate in Bombay’s commerce and finance (Shaul Shapir, Bombay – exploring the Jewish Urban Heritage. Spenta, 2013). Yet he kept to his traditional Baghdadi Jewish dress and manners, even though is children adopted western attire

By the 1860s, according to some accounts, Sassoon had already overtaken the Parsis in wealth accumulation. He opted to have his home in Byculla in Bombay, which explains why most of his buildings are located in that area.  He stayed mostly at Byculla’s Bungalow which is now Massina Hospital. His contributions to the Bombay landscape have been huge. (see chart)  But he was not fond of this city’s weather.  He finally migrated to Pune, and left the management of Bombay and the properties to his son Albert, the landlord of Bombay. He died in Pune and was buried there.

He remained a leader for the Jewish community in India for as long as he lived, and his son Albert would have normally inherited this mantle. But Albert chose to abandon this city.  He married into the Rothschild family, and chose to stay in Europe.  Bombay and its properties and mills were probably loose change for him at that time and lay forgotten and abandoned.

So what happened to the 17 textile mills? One does not know for sure.  But it is quite possible that they were picked up by Indian businessmen who then turned industrialists. And, there is no denying that if the 17 mills had not been set up by Sassoon, it is quite possible that Mumbai would not have become the textile capital of India by the middle of the 20th century.

The Sassoons were thus the biggest wealth generators of their time in India.  It is a pity that they did not stay in India to grow it further.

https://www.freepressjournal.in/business/webinar-why-india-and-china-need-each-other China and India can complement each other JesciliaK China and India are two resilient countries. Both countries have proved themselves even during the ongoing COVID pandemic,...