Home Policy Watch Why politicians who promote slums should bear the cost of treating COVID-19... 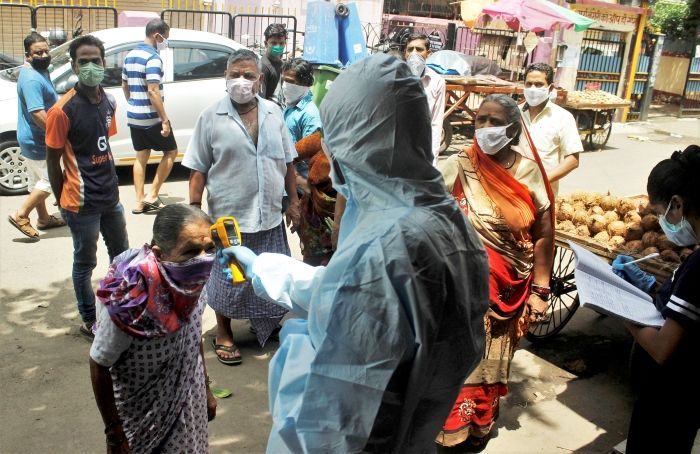 Politicians promote slums, which worsen the Covid-19 spread. Now they should pay for the costs too.

The numbers of Covid-19 infections continue to soar.  Two months ago, when this author talked about why slums could cause much of the pandemic (http://www.asiaconverge.com/2020/03/coronavirus-slums-become-new-hotspots-ravage-cities/), this was a surmise.  But as the numbers keep mounting, there is no escaping the co-relationship between the rise in coronavirus cases and slums (see chart). We have chosen not to take the net infection figures (total infections less recoveries) because that would be misleading.

Each person who is found confirmed implies treatment costs and financial losses as well.  Those who have recovered have already paid this cost, either directly, or indirectly through taxes and foregone income.  Moreover, there can be no price tag on deaths — that number masks the pain, the incalculable loss, and the final confirmation of the tragedies unleashed on families and loved ones.

What makes these numbers doubly painful is the realization that many of these cases were a direct result of a deliberate attempt to create and encourage slums (http://www.asiaconverge.com/2018/09/slums-democracy-and-governance/_. This was a contribution of India’s elected representatives, in collusion with the bureaucracy, and sometimes the judiciary as well.

The judiciary is less guilty, because it did, time and again, ask for a cut-off-date beyond which slums would not get regularised.  True, each time elected representatives gave the courts a solemn assurance of the cut-off date.  And each time, repeatedly, legislators sought to ignore the cut-off date, going against their own assurances on oath to the courts.

When the courts frowned at such moves, and tried to block the elected representatives, the latter dared to pass ordinances and thus frustrate the moves of courts.  The courts could have challenged these ordinances.  There were enough judgements which held as illegal ordinances passed merely to frustrate earlier orders of the courts.  One of the most significant was that passed by Justices Madan B Lokur and Deepak Gupta of the Supreme Court on 15 February 2018 (http://www.asiaconverge.com/2018/03/corruption-collusion-legislative-filibustering/). It stated that legislators could not pass laws with retrospective effect to frustrate orders passed by courts.  But there has been little attempt to penalise such legislators for contempt of court and holding such ordinances unconstitutional.

The courts have thus buckled under legislative pressure.

The legislators are interested in creating slums because that allows them to trounce a popular representative of the people by tinkering with the constituency’s demographics. Consequently, an existing population is ambushed by thousands of ‘outsiders’ who camp there and outnumber the existing locals. It is akin to casting bogus ballot papers in electoral boxes.  Yet neither the courts nor the election commission have intervened.

Obviously, demographic tinkering in select constituencies is patently wrong, the squatting on public land is clearly illegal, and the regularization of these illegal dwellers is nothing but a whitewashing of such illegalities.  The courts have quietly watched at all these illegalities taking place and and have done little to stop them.

Hence the courts too are guilty. Their silence has made the judiciary weaker, and the legislators even more powerful than they were earlier.  Hitherto, they could be challenged by both courts and voters.  But now they have learnt to ignore the courts; and silence existing voters by bringing in more people from outside to outnumber local populations.  The legislators have bushwhacked democracy.

The costs show up

Today the real costs of such actions are being felt. Suddenly everyone realises that it is impossible to lockdown a slum, or practice social distancing there. Lives of common people, and even legislators, are at risk. And, finally, some of the most senseless decision are being cast aside by the Supreme Court.

It is time the courts now pull up legislators in slum infested cities – especially in states where slumdwellers are more than 5% (the national average) of the total population.  Each of such states has cities where slums account for 25-50% of local populations.

It is time to stop legislators from first rigging vote-count (through illegally created votebanks), then stealing entitlements – remember slums account for ten nine times more the entitlements they should get, and eventually endangering both lives and the economy through pandemics. The theft of entitlements is evident from Census 2011 figures.  Contrary to the average size of 5.3 persons per household for the country, slums in cities account for a household size of a mere 0.5.  Effectively, each slumdweller belongs to two families (on paper) so additional entitlements could be stolen.

The encouragement to slums must stop immediately.  The costs are now becoming unbearable.

Turkey could teach India a thing or two