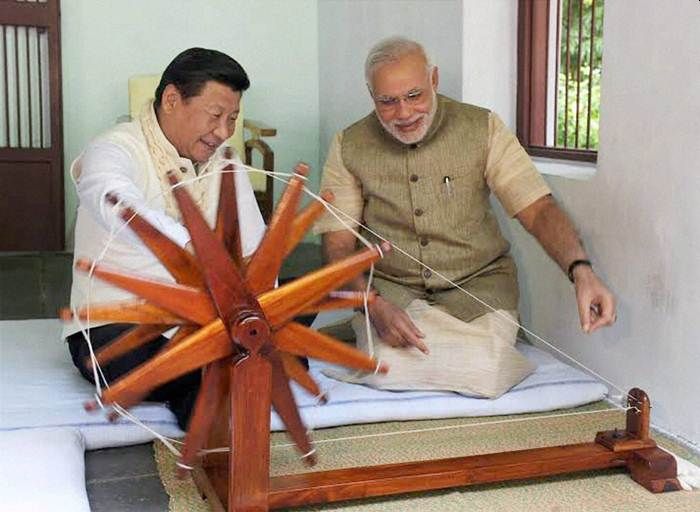 How should India view China?

At times of war, it is dangerous to talk of peace.  As the poet TS Eliot once remarked (through the lips of Aunt Agatha in A Family Reunion), “In a world of fugitives, the one taking the opposite direction will appear to run away.”  Yet, there are times when it makes sense to cry out that the emperor has no clothes.

It is at such times that geography, economics, history, and culture need to be invoked. This is because there are many unscrupulous players who try and provoke the rabble to misinterpret  each of these issues. That is why it is necessary to examine each of these, one by one.

Take geography.  First, you just cannot escape the reality of geography.  China is and will remain India’s next door neighbour.  It is large, and it just cannot be wished away.  India is large as well, but China is three times larger in geographical terms, a bit larger in terms of population, and around six times larger than India in terms of GDP. Then take history.  China has vexed India. Columnist M.J. Akbar recounts the follies of Jawaharlal Nehru, India’s first prime minister (https://openthemagazine.com/cover-story/is-india-still-paying-for-nehrus-china-submissive-policy/). He narrates how Nehru lost the opportunity of finalizing India’s border with China in September 1951, when “Zhou Enlai provided an opportunity for closure with a statement that there was no territorial dispute with India. But Nehru decided that it would be better to let sleeping boundaries lie.”  Similarly, he reminds readers about how Nehru gave up the opportunity of getting India a permanent seat in the UN’s Security Council.  Or the crucial question about “How can China have any more claims south of the line it created of its own volition in 1962?”.  He also talks of how China grabbed Aksai Chin.  It is then that you realise that underlying all these blunders was India’s inability to think strategically.

India is making the same blunder again. It is refusing to think strategically. Prime Minister Modi is doing exactly what Nehru did. Working on the basis of sentiment and pride, rather than strategy based on geography, economics, and history. And as this publication pointed out last week, there are more questions about the Galwan flare-up than there are answers (https://www.freepressjournal.in/india/more-questions-than-answers-on-galwan-face-off-writes-nawshir-mirza).

We will come to culture a bit later.

So, look at the harsh reality of numbers.  The government tacitly encourages the rabble to call for a boycott of Chinese goods.  But last year (2019) barely 3% of China’s exports reached India.  Yet India’s exports to China accounted for 5% of our export basket. Clearly, India needs to export to China much more than China needs to export to India. Again, when we look at imports, Chinese goods accounted for 13.7% of India’s imports.  But imports from India accounted for just 0.9% of total Chinese imports.  So, whose need is greater?

Listen to the cries of job creators in India – right from pharma sector companies to automobile players – that a ban on Chinese products will mean even more job losses in India; even a destruction of wealth.  Increasing import duties on Chines goods will only make Indians poorer; it won’t affect the Chinese overmuch, as the numbers above show.

Take another factor. Chinese investments in India.    Just look at the Unicorns that have emerged in India.  The promoters were Chinese funds, not American, Japanese, or European funds.  None had the patience or the confidence in Indian enterprise the way the Chinese had (http://www.asiaconverge.com/2020/03/china-investments-in-india-are-strategic-and-profitable/) .  The beneficiaries were both Indians and Chinese.  So now, India wants to block Chinese investments.  Does it want to block funding to Indian enterprise as well?

Now go back to culture.  India and China are ancient cultures.  They go back to over 2500 years.  There have been no recorded fights between the two nations till post-Independence politicians decided to muddy the waters.  The 1962 war was on account of such muddying of waters – the details are still kept secret by Indian authorities.  Go to China.  The common person on the streets does not even know that Indians distrust the Chinese. Very few even know anything about the 1962 war.  For them it is just a speck, it might not even have existed.  Indian politicians have blown this speck to become larger than life, have stoked xenophobia, and have used it to distract people’s attention each time the economy does badly.

Instead, India should be learning from China – how to make is own people rich, and educated (http://www.asiaconverge.com/2020/05/education-enriching-other-countries-pauperising-india/), with more concern about health (http://www.asiaconverge.com/2020/05/atma-nirbhar-bharat-and-healthcare-headed-for-the-icu/). India should be relearning the steps China is taking to promote its own version of Panchayat Raj (http://www.asiaconverge.com/2019/12/walk-through-yu-village-in-china/). And it should be envious of the way girls in China can safely and confidently walk, study, and work — even at night – despite having less boys than girls in that country than India does.  No country can become great without good education, health services and respect for women. India has fallen woefully behind China.

China focusses on policies. India is concerned more with politics, with tokenism and with optics.

One more important lesson for India’s politicians. Remember Chanakya. He had remarked, “Your neighbour is your natural enemy and the neighbour’s neighbour is your
friend”.  If India had been thinking strategically, it should have wooed Russia with greater ardour, not dust the files only last fortnight and order the Sukhois that Russia had offered to India.  Indian politicians did not want to upset the US. And some Indian businessmen do not want the Chinese as they could threaten their own business plans.  Consequently, India almost ended up annoying Russia, and even China. It began making overtures to Russia once again only last fortnight.

This is political thinking, not policy thinking.  India can benefit more from Russia and China than it can from the US.  Just study global developments in Iran, Iraq, Libya, Syria, Mexico, Venezuela and even France and Germany. It is not difficult to identify the threat to peace. USA certainly has tremendous potential for mischief, a hundred times more than China.

A final word on strategy.  India does not have to trust China blindly; any more than China would trust any country blindly. But China remains a next-door-neighbour. India will have to live with it.  It will have to find ways to make peace with it.  Peace comes not by blacklisting investments from China or boycotting Chinese goods.  India will only hurt itself more.

Use Chinese technology but try prevent a worsening balance of payments.  One way of doing this is to work out ways to convert the trade deficit into investments (http://www.asiaconverge.com/2019/12/walk-through-yu-village-in-china/).  The good thing about investments is that they create jobs, wealth and lay the foundation towards more peace than war.

That may annoy the US.  But India needs to feed its people and make them atma nirbhar (self-reliant).  That does not come by spurning the little enterprise that comes your way.  Remember PL-480? The obnoxious and humiliating clauses for food related imports that the US forced on India during the 1960s?

China has brought in investments and that made Indians richer.  The US could have done a lot more.  China has its flaws.  So does India.  But both countries must now find ways to reduce the irritants and focus on what makes both stronger, wealthier and happier.

For India, the choice is clear.  It can provoke China – as it did in January 2018 when it modified the Enemy Properties Act by including China as well (without a discussion), or when it stopped automatic investments by China. By doing that it will only hurt itself.

But it will still have to live with China.  By provoking China, it will ratchet up tensions and end up spending more on its defence preparations than on creating opportunities for wealth generation for Indians. It will create poverty, and then resort to rabble rousing politics to drown out the absence of wealth-generation-policies.

That should never happen.  Don’t make India poorer than it already is.

India will have to resume RCEP negotiations, says Chinese expert

https://www.freepressjournal.in/business/india-will-have-to-resume-rcep-negotiations-says-chinese-expert India and the RCEP By Jescilia Karayamparambil and RN Bhaskar Beijing: India’s decision to back out of Regional Comprehensive Economic Partnership (RCEP) at the last minute...