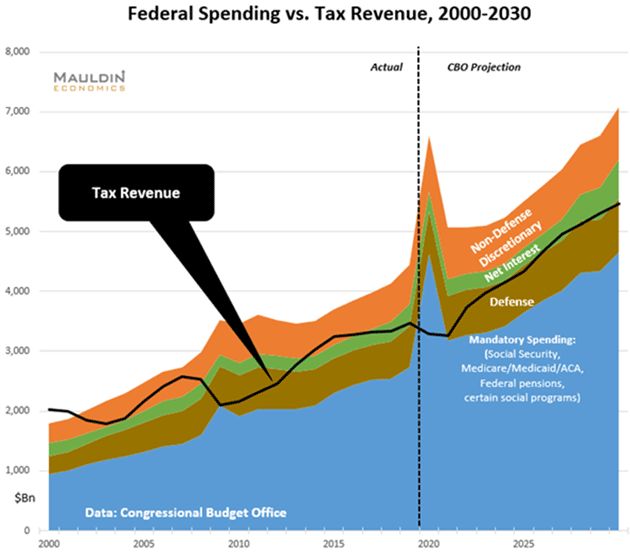 Tax revenues would be insufficient, as per the above chart, to cover net interest and non-defence discretionary spending. There has to be a reset. This huge debt cannot be serviced and, after a point, cannot be rolled over.

There are few options. The biggest item (blue in above chart) is the mandatory spending on social security, medicare, federal pensions etc. These would be sacrosanct and difficult to cut. Defence is a holy cow, in fact with a belligerent China, defence spending is increasing. Corporate taxes were cut, to make companies competitive, and it worked. Unlikely to be raised.

It is possible that Central Banks would issue Central Bank Digital Currencies (CBDC), thereby bypassing commercial banks. Once issued to all, physical cash would disappear, and, IF it is done, would achieve what Demonitisation failed to do. Digital cash would make it much easier for Governments to collect taxes, and, on the  flip side, lead to possibly unacceptable levels of violations of personal privacy. Big Brother would really be watching you!

That is why China is likely to be the first country to issue CBDC, and USA is also considering it.

Central banks may also print more money and start buying assets, as the Japanese central bank has been doing. Bank of Japan is a buyer of both debt and equity (through ETFs) in Japan, and is amongst the top 10 shareholders for 49.7% of companies!

Towards the end of the video he talks about a possible scenario in which the US may claim damages from China for the harm caused to its economy due to the spread of Covid, which originated in Wuhan, China. It may, perhaps, set off its liability on the over $ 1 t. holding of its T Bills by China against this.

Another option is, as pointed out by American Bond Holder’s Association on its website, to enforce claim on its holding of over $ 1 trillion of Chinese bonds, issued during the period 1900-1940. The PRC does not recognise this debt, saying it was issued by the Government of what is now Taiwan. Yet it claims a one China policy, and has, in fact, serviced similar bonds held by Britain (prior to the deal to hand over HK to China).

The world is now undergoing a huge transformation, exacerbated by Covid. The Fourth Industrial revolution will introduce technologies meant to greatly improve productivity and spur economic growth. These technologies include 5G Telecom (which would facilitate, amongst other things, driverless cars), Robotics (machines to replace humans in factories), AI, Internet of Things (machines talking to each other) and others.

The truth is that these will, like any disruptive technologies, involve job losses initially. Consider that when the automobile displaced horse drawn carriages, lots of jobs of carriage drivers were displaced. But, over time, the number of jobs created in manufacture, repair and driving the automobiles, far exceeded the jobs lost. Similarly, robots would cause job losses in the type of work amenable to automation, such as assembly line in, say, automobiles. It is expected that, over time, new jobs created would exceed those lost.

Alas, the Governments at the Centre and the States are not telling people to prepare for job losses, and for retraining to find new jobs. Instead policy makers spend time in petty issues.

Covid has, in a way, prepared us for the 4th Industrial Revolution. Millions of jobs have been lost already and those unemployed would be more willing to re-train than had the companies fired them en masse. Covid has also succeeded, where Governments had failed, to clean up the environment. Work from home, obviating the need to travel to work, using fossil fuels, has also been more easily accepted than if imposed.

The sensex is steady, closing the week at 40,686. Investors ought to be cautious. US presidential elections will be held Nov 3. This will create uncertainty. The question of a smooth transition of power is also hanging like a Damocles sword. And, sooner or later, a great reset is coming. Goldman Sachs recommends selling the US $ and buying silver.

Better to be safe than sorry.

https://www.freepressjournal.in/analysis/policy-watch-the-supreme-court-to-indias-rescue-again India's rights, laws and values are being protected by the Supreme Court because the legislators and bureaucrats failed miserably RN Bhaskar Last week the country got...