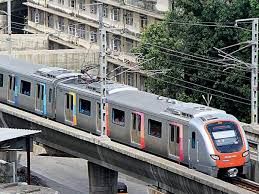 Within the next one week, the courts will decide whether Mumbai deserves the chance to plan for a century ahead, or to think development piece-meal.  At stake is a vision for making Mumbai more liveable than it is now, to climb the ranks of being the most liveable city in the country. Mumbai deserves this.  It is the largest revenue generator of revenues for the entire nation and gets extraordinarily little back in return.  It is only in the past few years that the state’s planners have begun to realise the importance of investing in a city that has given India so much.  It is heartbreaking to watch the central government giving away funds more generously to states like Uttar Pradesh, Bihar, and Madhya Pradesh, when it ought to have been Mumbai.  It should have got a fair share of the money it generated year after year for India (http://www.asiaconverge.com/2020/08/government-plunder-productive-states-in-india/).

That is why the need to urgently clear plans for building the metro car shed at Kanjurmarg in Mumbai is critically important.  It is unfortunate that logic and need have been pushed aside by needless litigation. The courts need to realise that sticking to the earlier plan of Aarey is not only more expensive, but also short sighted.  Aarey as the site for a car-shed is not only environmentally disastrous but is also one which will provide a solution for barely ten years.  Then the search for additional land for further expansion will begin.  Kanjurmarg allows for an integrated city transportation plan for the next fifty years, perhaps for a century.

To understand this, it is important to look at two tables which sum up all the arguments.  We are not discussing the issue of ownership of land, because the land was always with the state government.  Suddenly third-party rights have emerged to delay a project and bring embarrassment to the city planners. Someone is keen on throwing sand in the wheels of development.

First, the plan to connect Mumbai and make travel across the city and its extended suburbs both easy, and affordable is something that Mumbai wants badly.  The current local trains used to ferry over 80 lakh passengers daily, though in recent rimes they carry only 34 lakh passengers.

But these passengers travel is conditions that are worse than cattle class.  The trains are so overcrowded that around 10 people die each day on its tracks – often by falling off the over-packed trains.

The Metro lines plan to increase the capacity with seamless connectivity (https://www.freepressjournal.in/business/metro-line-2a-and-7-will-be-operational-in-2021-says-ra-rajeev-metropolitan-commissioner-of-mmrda).  It plans to allow people to travel in air-conditioned comfort, and with closed doors, so that lives are not lost, and travel comfort increases by a magnitude.  For the first time in decades, Mumbai will get some of the money it paid for the rest of the country to provide facilities for its own citizens.  That is why this project is crucial.

Second, The Aarey project would have been good for the next ten years after which it will require more land (see table) and would demand a cutting down of more trees.  The Kanjurmarg site allows for integration of car-sheds for several lines and can cater to the needs of the metro lines for the next 50 years.  That is why the Kanjurmarg site cannot be delayed any more. As can be seen from the table alongside, the Kanjurmarg site as a car-shed delivers more at lower costs. The Aarey site would require additional and for which another Rs.1,500 crore would be required.  Thus, the choice of Aarey would involve and outlay of around Rs.3,000 crore, as against a cost of Rs.1,400 crore for Kanjurmarg (because the land already belongs to the government).  More importantly, the Kanjurmarg site can offer these benefits with little damage to the environment because few trees need to be cut down.

The four lines that will be serviced at the Kanjurmarg car shed will involve a total outlay of around Rs. 21,000 crore.  Thus, every day’s delay will cause the project costs to go up by Rs.4 crore just in interest costs.  And this does not include other grounds for project cost escalation.  That will have to be paid by taxpayers, which is avoidable.  That underscores the need to minimise delays is of crucial significance.

Finally, it must be noted that the penchant of politicians to delay projects for states and municipalities who have fallen out of favour is not new.  The entire dedicated freight corridor project which could have altered the logistics for north and west India got delayed by almost 10 years just because the centre did not want the benefits to go to Gujarat (http://www.asiaconverge.com/2020/05/investments-land-smallest-part-problem/).  Luckily, for the metro projects, there ought to be no rift between the centre and the state because the land belongs to the state (even though the centre has suddenly tried to put a spoke in the wheel). It is being funded by the state government.

The sooner it gets cleared, the better.  Mumbai needs it.  The people who have helped build India, now need to build their own future as well.