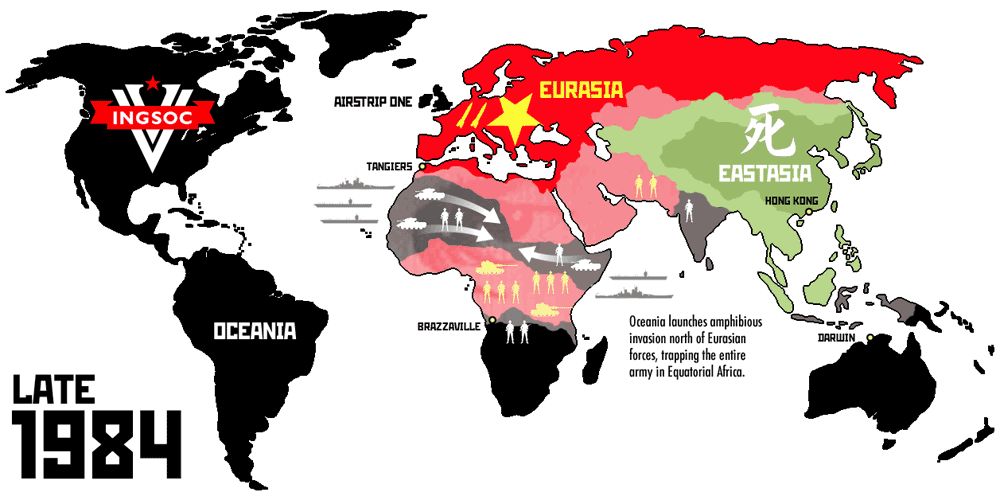 Is India ready for a fast changing world?

­­­­In 1949 George Orwell wrote a fantastically prescient book called 1984. It is  about a world  which, as per Wikipedia, ‘has fallen victim to perpetual war,  omnipresent government surveillance, historical nepotism and propaganda.’

Three blocks of nations, viz. Oceania (the Americas along with Britain), Eurasia (Europe and Russia) and Eastasia (China, Japan, SE Asia) are constantly in a state of war, with any two  combining forces against the third. Alliances keep changing but no one, or combination of two, is able to conquer the other. Societies are kept under control through government surveillance (think street cameras and facial recognition; we are already there), thought control (think of the power of social media and the ads. which pop up as soon as one searches for anything), and doublespeak (think of any politician, anywhere).

We are seeing such blocks emerging – USA, Europe and China. Globalisation has taken a big hit. The US uses its global currency, the mighty $, in which global transactions are priced, as a lever to impose sanctions. Its control over SWIFT, the global payment system, enables it to use sanctions as a tool to impose its will. China, an emerging global power, detests such power in the hands of the incumbent superpower, USA, and seeks to find ways to circumvent it.

China has struck deals with other countries, such as Russia and Iran, to price their oil in renminbi instead of the $, so as to avoid the sanctions. Both of them are happy to do so, themselves having faced the brunt of sanctions.

It is with this background that Rana Faroohar has written an interesting article, Bitcoin’s rise reflects America’s decline in FT recently. Maybe, she argues, the  popularity of crypto currencies is derived from the fact that they are impervious to sanctions, and countries can thus transact trade across nations or blocks such as Oceania, Eurasia and Eastasia. She admits she does not know which of the 1700 or so private crypto currencies will ultimately be the most accepted one, but for now, she concludes, they may be viewed as canaries in the coal mine.

The world is fast changing, in terms of technologies for the 4th Industrial Revolution, the geopolitical alliances, the historical nepotism and propaganda. With the advent of the new technologies (robotics, AI, autonomous vehicles, 3D printing etc), there will be huge job disruptions.

Jobs will disappear in some industries, even as others will come up. People would need to re-skill themselves, and fast.

How will this impact politics, especially in a democracy?  Indian politicians head to the polls every 5 years for Central and State elections. Pre election promises of jobs are made with the ease of a Pinocchio with a fake nose, unperturbed by its increasing length. Free power, subsidised fertlisers, debt forgiveness, are other promises (i.e. bribes) made, with consequences to the environment, the water table and the health of the financial system, but not to the politician simply wanting to get elected. Add to this the fact that a majority of our elected MPs have been accused of crimes, including heinous ones, but yet continue to be lawmakers until they are finally convicted. Enough of a reason for them to resist judicial reforms that would benefit the country but harm them.

Ultimately such impossible-to-keep promises impact GDP growth and allow a more focused country like China, not needing to make them, to race ahead. China’s economy, once equal to India, is now 5 times larger. Whilst they were focussed on building their economies, growing industrial capacities (China is the largest manufacturer of steel, cement, rare earths etc), mastering the technologies needed for the 4th Industrial revolution and building up their defence capabilities, our polity was busy arguing inanities and resisting reform.

No, we are not prepared for a fast changing world. We see no determined Government thrust towards acquiring knowledge in robotics, AI, I0T, genomics, autonomous vehicles, 3D printing etc. all of which would be essential to compete.

That, in turn, would need far more serious, and far faster, pace of economic reform than has been displayed. In a system where there are elections every year (general, state, municipal, panchayat) and where the polity makes promises they cannot keep, can we undertake such serious and necessarily tough reforms?

Not in a mutual back scratching system. Take the Saradha ponzi scam, which broke out in 2013, in which the scamsters collected some $ 4-6 b, was on a slow track. It is only now, 8 years later, but just prior to a State election, that the investigating agencies have summoned some political leaders, to investigate their role in the scam.

So, if India is to compete in a fast changing world, it must grant independence to its investigating agencies and to its judiciary and ensure that justice is speedy and fair. And not used as a political tool to be pulled out at a convenient time.

Or take education, the foundation of any society. Last week, the AICTE, the regulator for technical education, bizarrely tweaked rules for admission into technical education programmes. It permitted students who have not studied physics or mathematics (or both) in classes 11 and 12, to apply for admission to technical courses! Unbelievable! If they have not got basic grounding in these subjects till class 12, can they be expected to master them later? And what is the purpose?

Education and speedy Justice are two pillars of a strong society and the foundations for economic prosperity. They cannot be neglected.

The tsunami of liquidity emanating from the Covid relief packages will fuel asset rallies. Recent falls in US Treasury bond prices have increased bond yields, which drives some more money towards bonds. But with low yields, Equities are the preferred asset class.

Given the IMF projected 11.5% GDP growth for India, the highest in the world, we should get a good inflow of FII funds. So it will be a liquidity driven rally. For it to sustain, our Government has to get down to serious reforms, and desist from making untenable promises.