Home JMulraj Karma is a bitch! 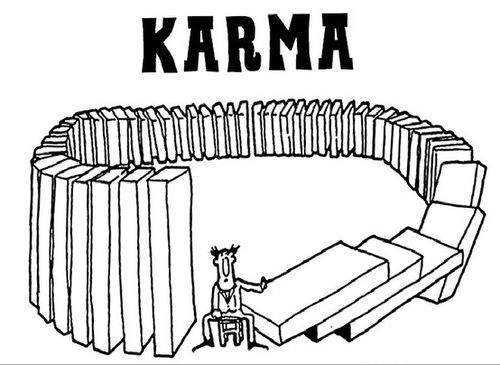 What goes around, comes around

US Treasury Secretary, Janet Yellen, is discovering that karma is a bitch!

In the period, 2014-18, as Chairperson of the US Federal Reserve (equivalent to RBI Governor), she continued with the policy of low interest rates, in order to assist the US Government service its debt, and with quantitative easing, flooding the market with money by increasing the size of the Fed balance sheet.

So one muse pose this question: Janet Yellen, do you believe in free markets?

If you do, why did you push interest rates down even to negative territory? This policy has immense consequences. The cost of money is determined, as all else in a free market, by demand and supply. By increasing supply at a flick of a printing press switch, you distort the pricing of capital, which, in a capitalist society, is its bedrock.

Interest rates went to zero (ZIRP, or zero interest rate policy) and even to negative (NIRP).

Pension funds found themselves unable to make ends meet because they invest pensioner money in the safer T Bills which were giving far lower yields than needed to service their obligations. The pension fund industry had assets of $ 32 trillion, in 2019, or 1 ½ times its GDP of $ 21.4 trillion. So in order to fetch better returns, pension funds invested in riskier assets including equities. If the markets crash, pensioners would suffer.

The Fed also agreed to fund large Government programmes, including for Covid relief in 2020. Part of these funds, intended to push consumption and investment growth, went, instead, into assets like equities and commodities, and, yes, crypto currencies (bitcoin is the best performing asset class). The larger borrowers including companies and high net worth individuals, could borrow at very low interest rates and invest in equities, where yields would cover the borrowing cost and the appreciation would be a bonus. This led to a further divide in inequality.

Today US Government debt is $ 27 trillion, and is hard to service. Today Janet Yellen is the US Treasury Secretary (like our Finance Minister) and tasked with sorting out this mess, which Janet Yellen, US Fed Chair, 2014-18, helped create.

Karma is a bitch!

As Treasury Secretary, she has to find ways to fund a new $ 2 trillion bill to invest in infrastructure. She plans to part fund it through a tax increase on corporate America.

President Trump had brought down US corporate tax rate to 21%, in order to attract the bigger American companies to invest in America. (Every country wants atmanirbharta). Companies like Apple had set up bases in countries like Ireland, which offered tax incentives to them, and this was lowering tax revenues garnered by America.

In order to raise corporate taxes to fund infrastructure, Treasury Secretary Yellen had to stop other countries from competing for foreign direct investment with lower rates in their countries.

So Yellen has called for a global minimum corporate tax. Never mind the US belief in free market forces!

Yes, karma is a bitch!

All countries, and global leaders, are on their own trips, and co operation is at its lowest. This bodes ill for economic growth.

So the US is flexing its financial muscle to keep interest rates artificially low and so create all sorts of anomalies  in pricing of financial assets. It is flexing its military muscle in the south china sea and, recently, at Lakshwadeep, where it failed to inform India when it entered its territorial water, despite India being a member of the Quad.

The Chinese are flexing their muscle too, with military aircraft flying over Taiwan, creating a potential conflict in the SCS. Russian forces are being built up in the border with Eastern Ukraine, creating another hotspot. Yet another is the middle east.

Veteran geostrategist, Henry Kissinger, suggests that Biden should talk to China or face a pre WW I situation. That is scary.

Scary because global trade is 60% of global GDP! The recent blockage of the Suez canal by an oversized and overladen ship was bad enough, but if any of these tinder spots were to conflagurate, it would be a death knell for global economic growth.

India is facing a second wave of the Covid virus, one that has mutated, and is far more dangerous. Complacency had set in after a post September decline and both the Government as well as the citizens let their guards down.

Stricter lock down measures will, obviously, affect businesses which are shut. Moneylife reports more small/medium businesses are shutting down in India. MSMEs (micro, small and medium enterprises) contribute 30% of India’s GDP, and provide 59 million jobs. Just over half of those surveyed were confident of their ability to survive if restrictions continued for 6 months, which means that half would not. That is worrying, and calls into question the IMF forecast of 11.5% GDP growth for India this year.

Adding to the disruption caused by Covid, and by uncooperative and belligerent political leaders, is the change being brought by disruptive technologies of the 4th Industrial Revolution.

So consider the multiple challenges of political leaders. Alternative job creation will require investment, most often foreign investment for the developing nations. But the ability to attract such investments through attractive tax offerings is sought to be negated by the Yellen initiative.

Global trade, accounting for 60% of global GDP, is being threatened by a variety of factors, including heightened political rhetoric and geopolitical tensions.

The Central banks are debasing their currency with ZIRP and NIRP policies. As a central currency, the US is enabled to print its way out of crisis. Its ability to impose sanctions on other countries has been long resented and now faces a severe challenge.

China is planning a launch of a CBDC (Central Bank issued Digital Currency), which, if widely accepted, would gravely threaten the US $ as the sole global currency.

As Kissinger says, world leaders would have to talk to each other.

They would do well to remember that karma is a bitch.

INVESTMENT PERSPECTIVE By J Mulraj Oct 17-23, 2021 The transition from fossil fuel to renewables isn’t an easy one In the race for global supremacy, we are seeing...