Home Analysis Is Google an unregulated entity in India?

Google brush with the regulators in India

But many answers are not forthcoming

Google is expected to do the unusual all the time.  It has many firsts to its credit. It changed the search engine ecosystem.  The music video environment. The way mobile phones should operate. And the list goes on.

But now, given its sheer market dominance, it is under scrutiny by regulators in the EU and the US (among other places). This time, it is being queried by the Competition Commission of India (CCI) for its unfair practices in the media space. And the questions that are being raised (and not raised) could actually raise some very disturbing issues, with huge ramifications for both Google and the media industry.

When Google first sought listing almost 30 years ago, financial analysts were stunned when they reading the listing document.  In that Google had said that it sought to raise around $100 a share and hoped to sell around 25 million shares ($2.5 billion) at the turn of the century.  What shocked them was that it also stated that it did not really know how it would use the funds, because its promoters were working on some rather unusual concepts. 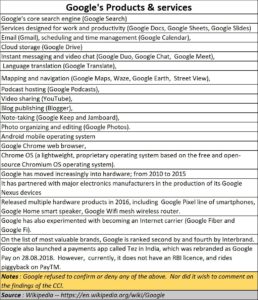 Google hasn’t looked back since. Its three quarters of 2021 results show how successful it has been (see chart) . And people have begun waiting for the end of January to hear the full year’s results.

Ever since the days when it got listed, its search engine business has grown and expanded to cover a vast variety of products and services.

It offers a range of services (see box) that it had not even envisaged in its infancy. As its services expanded, so did its revenues.  And clout as well. With great success, comes enormous power.  With power one expects immense responsibility.  But Google, like all giants, appears to have forgotten how to be responsible in its quest for more even more profit and clout.

Today it straddles over the market with services that touch almost every part of human – and even corporate — life.

That in turn has brought in the regulators – in the EU, in the US, in Australia, and now in India.  On 9 November, 2020, the CCI finally sent out a report announcing its decision to investigate Google’s activities (https://www.cci.gov.in/sites/default/files/07-of-2020.pdf)

When contacted, Google’s spokesperson initially sought to allay fears by stating that the CCI move is not unusual.  “They are doing their job.  And we are doing ours,” he said.  He said that the CCI has to be educated about the way the internet and e-services work. When queried further, he asked for a questionnaire to be sent to him.  We did that.  And then there was a wall of silence.

The questions we asked were quite direct:

The DNPA is sore about the way Google has begun entering into selective deals with Indian media groups on the manner in which it will use their content. In return it pays them amounts that do not appear to be either transparent or even fair. Over the last few months, Google has signed three-year deals worth millions of dollars with Indian media houses like Hindustan Times, NDTV and Indian Express.

It may be recalled that this is the issue that almost got Google expelled from Australia – after which it settled with some newspaper groups.

Most of the terms have not been confirmed  either by Google or India based media groups. The figures given here are just estimates that one gets from media reports and by talking to people in financial circles.  Surely, Google needs to be both transparent ad fair.  Moreover, unlike as in Australia, Google, in India, is not bound by any legal codes for such relationships.

Meanwhile, there is news that Google has filed a writ in Karnataka High Court seeking more time to reply to Competition Commission’s queries pertaining to a probe into Play Store rules (https://www.businesstoday.in/latest/story/google-moves-karnataka-hc-seeking-more-time-to-reply-to-cci-in-play-store-probe-316982-2021-12-27). According to some media reports Google has also  extended the timeline for developers in India to integrate with Play’s billing system to October 31, 2022.

DNPA’s complaint may finally get the CCI to seek to muzzle Google in much the same way that the EU and the US regulators are trying to do.  This could include all revenues Google gets from traditional media companies and pure-play digital news players (https://www.exchange4media.com/digital-news/google-shares-only-10-15-of-digital-ad-revenue-with-news-websites-publishers-tell-cci-117953.html). Quoting a 2020 report by Dentsu, DNPA has stated that search advertising accounts for 25% share of digital advertising, and here Google exercises monopolistic control. Thanks to YouTube, Google also dominates the in-stream video advertising market, which accounts for 22% of digital ad revenues.

Maybe, depending largely on the way Goggle argues its own case, the CII will be compelled to look at other monopolistic and unfair trade practices adopted by other media players.  The case against paid news has been festering for over two decades now.  The question of whether telecom carriers should also become service providers is another subject few have cared to analyse.  Just look at British Telecom, or AT&T, or Verizon.  They do not offer Amazon like services or offer distance learning.  Should Indian media players be permitted to combine a carrier business with retail commerce?

The CCI’s investigations have just begun, and it is obvious that the case will bring up many other complex issues that have been buried under the carpet for long. 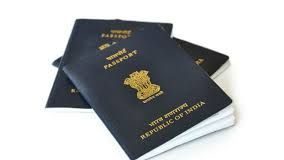 Passport identification – when the best get knocked down recklessly

http://www.freepressjournal.in/analysis/passports-when-the-best-get-knocked-down/1229747 Is the passport being degraded as an identity document? — By RN Bhaskar | Mar 01, 2018 08:57 am Last week, the government came out with a...