Why don’t the Government and the judiciary crack down on crooks? 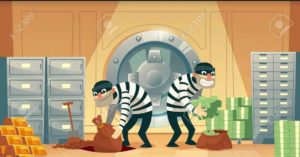 No longer is it necessary, as depicted in the image above, for bank robbers to dig a tunnel, break into a vault, mask themselves and steal from vaults.

It is far simpler, now, to bribe a politician, who picks up a phone to order a bank chairman to extend him a loan which ultimately becomes an unrecoverable debt. The money, along with the scamster, flees to another country and the investigative/judicial system drags on forever. This is how the wealth created by Indian entrepreneurs, farmers and employees is dissipated and this is why the dream of India becoming a global power, though attainable, won’t be, until we get our act together.

That the Indian economy is performing well is evidenced by the Rs 27 lac crore (27 trillion) in tax collection for the year ended Mar 2022. This comprised Rs 14 lac crores in direct taxes and Rs 13 lac crores in indirect taxes. The party is spoilt by the Rs 2 lac crores of bad loans written off by banks, of which Rs 1.3 lac crores are in public sector banks.

There are several reasons for this huge write off. First there are foolish electoral promises made by politicians, to get elected, with no ability to keep them. Free power to farmers, which actually harms the farmers because of over watering, and tax free income (meant to help small farmers but actually used to launder black money earned by large earners), are well known problems.

Listen to the electoral promises of Arvind Kejriwal of the Aam Aadmi Party (AAP) in Punjab. He promised 300 units per month which, for 80 lac users, would cost Rs 5,000 crores a year. He promised Rs 1000 per month to each adult woman, which would cost Rs 12,000 crores for the 1 crore women in the state. He promised to write off past electricity dues, another Rs 10,000 crores. (Such write offs are blamed on banks, but are due to political promises). Punjab already has a debt of Rs 3 lac crores. Keeping such promises is impossible.

What can be done about such electoral promises, that the electorate continually fall for?

Here is an idea. Perhaps the Election Commissioner (EC) can mandate that the party involved deposit 25% of the cost with the EC as its share of contributing to its grandiose welfare ideas. This would make them more circumspect in making them.

But bankers are also to blame for loans given without a proper appraisal. One of the most ludicrous examples of poor appraisal is a loan given to Kingfisher Airlines with its brand value as a collateral security. It is common sense that a collateral security is used when things go wrong, and the loan cannot be serviced. When this comes to pass, the brand value would be zero, since a brand is valuable only when the going is good. So, lending against a brand value is oxymoronic (the oxy is optional).

The amount of Rs 2 lac crores written off by banks is 7.4% of the tax collections, a whopping amount. Had this been lower, either by politicians keeping their mouths shut or by bankers keeping their eyes open, or by the judiciary cracking a whip to deter scams, India could have spent more on education (less than 3% of GDP) or on health (1.4%) or other necessary spends. So, unless we sort out such a waste of resources¸ and unless the judiciary speeds up proceedings and metes out deterrent punishment, India will be an ‘also ran’ in the global race.

The attention of the world continues to be focused on the Russian invasion of Ukraine. Besides the countless deaths and injuries, the broken families, over 3 m. migrants fleeing Ukraine, the war crimes committed by Russian troops, shooting innocent civilians, hands tied behind their backs, and other atrocities, the war has exposed a lot of hypocrisies and inconsistencies. Around 30% of Russian oil to Europe flows through Ukraine, under prior arrangements, as it is needed. Necessity is the mother of invention. Ukraine needs the royalty money that accrues to it. Russia needs the revenue from its sale. European countries, especially the largest, Germany, needs the oil to keep its factories running and its homes warm. The CEO of BASF, the world’s largest chemical company, has warned that, without Russian oil and gas, over half of German small and medium sized companies would shut down. So, until these countries create alternative sources of energy, which will take time, they are compelled to toe Russia’s line. Europe has given Euro 1 b. in aid to Ukraine, but has givem 30 b. to Russia. America continues to buy fertilisers from Russia, which are not sanctioned, because it needs them. Yet America and Europe castigate India for buying oil from Russia, offered at a discount. Sauce for the goose should be sauce for the gander. America is threatening India with consequences, for buying Russian goods.

Last week the BSE sensex closed at 59447, up 171 points over the week. It is ignoring the long term impact of the Ukraine war and the huge rise in price of crude oil, which India imports to the extent of 82% of its requirement, in the hike in prices of wheat and fertilisers, as a result of the war, prices of which have shot up and threaten a global famine before end of year, and rise in prices of a lot of metals such as nickel. The market is also ignoring the plan of the US central bank, the Fed, to raise interest rates (at least six more hikes of at least 0.25% each) and also of the RBI, in a bid to fight inflation.

A concatenation of events leading up to this crisis