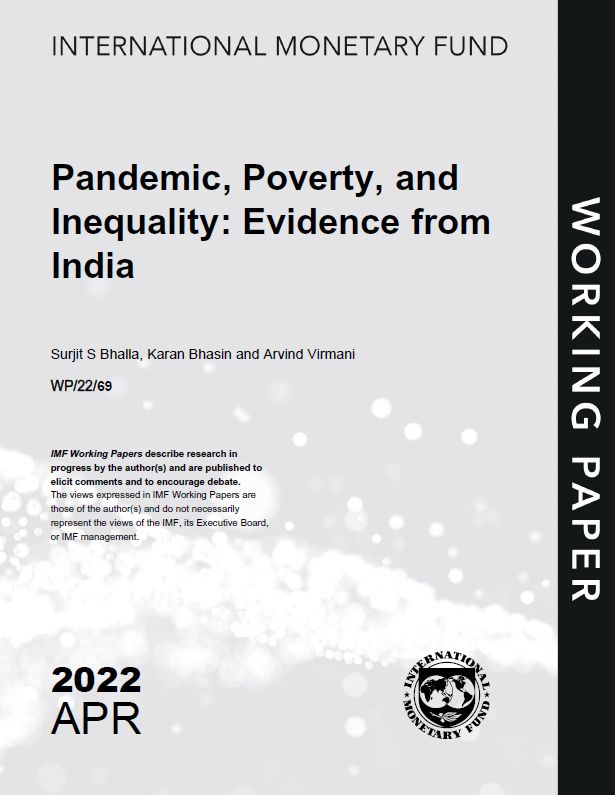 Wealth generation and dignity more important than distribution of doles

The finance minister has been singing praises (https://www.freepressjournal.in/india/india-kept-extreme-poverty-at-bay-in-pandemic-years-imf-working-paper) for the Prime Minister’s Pradhan Mantri Garib Kalyan Anna Yojana (PMGKAY). Under this scheme, free foodgrain was given away to needy people.  This was praised in a recent International Monetary Fund (IMF) 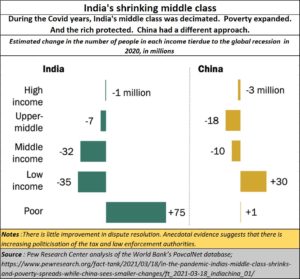 working paper. It credited the free foodgrain programme for only a 10 basis points rise in extreme poverty in 2020 to 0.86 percent despite COVID ) https://www.imf.org/-/media/Files/Publications/WP/2022/English/wpiea2022069-print-pdf.ashx).

There are three things wrong with the FM’s glorification of the free-food scheme.

First, she should look at the way the gurudwaras (the worship places for Sikhs) give free food to the needy.  Yes, they do feed the hungry and the needy, but only after they have done something in return for the temple – maybe sweeping the floor, or polishing the sandals and slippers of devotees, or serving food to devotees, or helping the elderly move around within the place of worship.  The Sikhs have a culture of helping people, but first teaching them to help themselves.  Politicians, unfortunately, like doling out alms, and even taking credit from this act.  They don’t teach people how to work for a living.

India’s politicians have made it a rule to give alms.  It is good politics.  But it is corrosive for atma nirbharta (or self-reliance) that the prime minister is fond of preaching to people.  Preaching is not enough.  Schemes must be created, and proper monitoring must be put in place, so that people learn to earn their bread. In that sense, the MNREGA scheme was better.  It gave people a guaranteed income, but only after they had worked for it.  It was badly implemented. But it did not take away the critical connection between work, dignity and livelihood.

There is a second problem with such eulogising.  It overlooks a critical study on the after-effects of Covid management in the world.  But it is more specifically about India and China (You can find the research at https://www.pewresearch.org/fact-tank/2021/03/18/in-the-pandemic-indias-middle-class-shrinks-and-poverty-spreads-while-china-sees-smaller-changes/).  The chart clearly shows that while China had managed to protect its poor, India had not.  China saw an increase of  just 1 million in the number of its poor people.  India saw an increase of 75 million.   So, was the “10 basis points rise in extreme poverty” over and above the 75 million?  If yes, it was terrible management, over a disastrous performance.  If no, then someone has been fudging the numbers.  Or has the report not been properly understood?  Or has it been cleverly marketed?  There is little room for comfort on the poverty front. 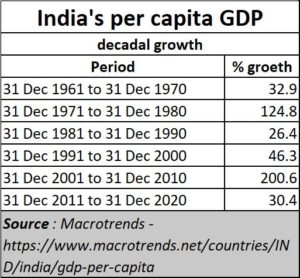 Study the chart a bit more closely. India actually succeeded in decimating its middle class.  China reduced the number of rich people instead and protected the common man.  Isn’t this what India should have done as well?

There is a third problem with the FM’s eulogy and the IMF’s working paper.  The true test of poverty eradication is actually per capita income – this is a figure government website in India do not give.  But the data is available elsewhere. And this is where there is a problem that the FM should be extremely concerned about.

Just consider the per capita incomes for each year after 2014 https://www.macrotrends.net/countries/IND/india/gdp-per-capita). However, since, the rates of growth vary from year to year, it is better to look at decadal rates of growth instead.

You will discover that India’s per capita GDP grew by only 33% during 1961-1970.  It then climbed to 125% during the next decade.  The following decade, 1981-1990 was disastrous, and the per capita GDP growth was just 26%.  That was when India was brought down to its knees, and had to mortgage some of its gold reserves.

Look at what has happened during the last decade.  India’s per capita GDP growth has slipped to just 30%, a wee bit higher than the disastrous decade of 1981-90. So, has poverty been eliminated?

The problem begins when governments try to win popular mandates through distribution of largesse and do not focus on growing the economy.  Economic growth suffers.  Misuse of the law enforcement machinery makes things worse. And high net worth individuals begin to flee the country.  A few months ago, the finance minister of West Bengal tweeted (https://twitter.com/DrAmitMitra/status/1451056778846740483?s=20&t=itO6NZZ-BNnE70VXyFQakA) about how more than 35,000 HNIs had fled the country.

Almost at the same time, the Pew research findings confirmed what many feared – that India had protected and nurtured a few wealthy people.  It had damned the poor.

And nothing shows this up better than what has happened in Uttar Pradesh (https://asiaconverge.com/2022/04/ups-cows-and-their-unintended-consequences/).  Yes, the government has been voted back to power.  But look at per capita incomes in that state.  It is the lowest in India, next only to Bihar. This is despite the largesse shown to this state by the centre (https://asiaconverge.com/2021/04/little-governance-till-uttar-pradesh-is-tamed/), and the special funding of projects in Mathura, Ayodhya, Allahabad/Prayagraj and Varanasi, among others.  When money is spent, it should have boosted people’s incomes.  But when that does not happen, you can be sure that there is something terribly wrong with the economy.

That is one reason why the FM’s laudatory remarks about free meals is most unwise.  It points to a government which has won votes through distribution of doles, not through promoting economic growth.  As for the authors of the IMF working paper, clearly, they opted to use a microscope where a wide-angle camera lens would have been more appropriate.

Next week, we shall try examining some of the policies that have led India to this impasse.