Home JMulraj Can we get out of the clutches of the Military Industrial Complex? 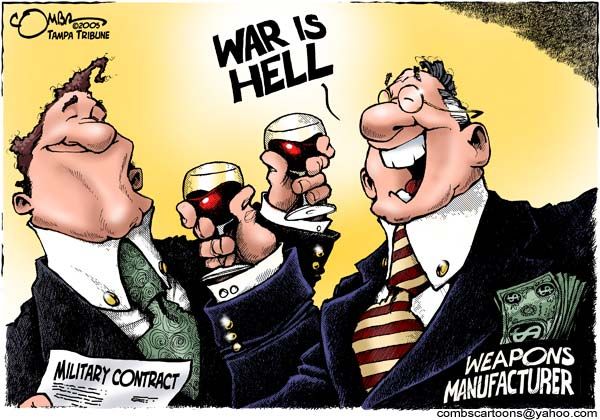 Far too many problems ahead of us

The world is beset by far too many problems, the short term future is cloudy.

The ongoing war between Russia and Ukraine, and the possibility of China being emboldened to invade Taiwan, is drawing away vital resources towards feeding the rapacious military industrial complex, MIC, which helps instigate them. The recently approved US package of $ 40 b. aid to Ukraine, including a large component of weapons, would help US defence manufacturers get replenishment orders for new ones. New lamps for old.

To see the impact of the MIC on US policy makers, watch this video of Noam Chomsky explaining the crimes of past US Presidents. The MIC holds sway over policy.

Added to that policy makers have to deal with rising inflation which, in USA in May hit a new high of 8.6%. To combat rising inflation, interest rates, at around 1%, would have to be raised higher than the inflation rate. This, of course, would seriously dent the stock market, which has had an upward roller coaster ride fuelled by cheap money. As everyone who has ridden a roller coaster knows, from the peak, the carriage goes swiftly down.

Together with a rising interest rate cycle (the EU raised interest rates by 0.25%, not enough by far, and India’s central bank by 0.5%, the US Fed will raise in mid June, likely by 0.5%), Central banks are also going in for QT, or quantitative tightening. So money will not only be more expensive, it will be less available. Oh yes, a dip is coming (the sensex dropped over 1000 points on Friday).

Furthermore, we are seeing prices of crude oil are rising, and are already at $ 122/b. Pump prices for petrol in USA are just under $ 5/g and diesel even higher, raising costs for individuals and for truckers. Aviation fuel is also pricey, raising airfares. Besides, both the cost and availability of wheat (Russia and Ukriane produce some 40% of global output), and other crops, are an issue. Together with a shortage of, and rising prices of, fertilisers, of which Russia is a major supplier, the output of other crops will also be affected. We may end 2022 with a famine, especially in weaker economies of Africa.

Much is being made of a sizeable $ 2 trillion hoard of savings in USA, generated largely by reduced consumption due to Covid lockdowns, as well as the stimmie (slang for stimulus) cheques doled out by Uncle Sam. But hey, considering that the US economy is $ 21 trillion, and 70% of that comes from consumption, or $ 14 b., the hoard represents less than 15% of consumption. It can only last so long, especially with rampant inflation.

The reason for high fuel prices are, simply, rising demand for energy (after Covid restrictions were eased or lifted) together with reduced supply, because of environmental concerns, and the reluctance to finance fossil fuel projects to increase it, based on ESG (Environment, Social, Governance) norms. Rather than easing the norms for domestic fossil fuel growth, the US Government is stretching its hands towards countries it dislikes, like Iran and Venezuela.

As these columns have earlier pointed out, there cannot be a ‘no-pee zone’ in a swimming pool! So if US reduces fossil fuel production, but the world demands energy, and other sources (renewables) are not sufficient to cater to demand, someone else will produce fossil fuel somewhere else (pee in another part of the global pool). So the environmental concerns will remain, but the ability of USA to influence energy prices is lost. This is what is happening in USA and why gas prices are near $ 5/gallon.

Yet there are some positive signals. The US posted a solid job growth in May of 390,000, despite labour shortages, indicating optimism by the corporate sector. And, global financial wealth grew 10.6% in 2021, to a whopping $ 530 trillion. That is more than 5 times global GDP. There is enough financial capital, but unevenly distributed, which is natural.

In a world where countries collaborate and globalisation works, global trade and wealth increases. In a world where the MIC succeeds in creating and nurturing conflicts for its own gain, the various problems mentioned above, abound. How do we get out of the clutches of MIC?

Last week the sensex closed at 54303, down 1465 over the week. China has reimposed a lock down in Shanghai, in keeping with a zero tolerance policy, as cases started rising (as they have in Mumbai too). China’s GDP growth will be muted in 2022, and a few regional Chinese banks are facing a consumer public protest, a rarity in China. The realty sector, which accounted for some 30% of GDP, is in trouble, and sales of apartments are sharply down. This will not only affect its GDP but also its banking sector, which has lent to the real estate companies. The largest, Evergrande, had $ 305 b. of debt, largely from domestic sources.

US showed a negative economic growth in Q1 of 2022. Should it show a negative growth in Q2 as well, it will be, by definition (two quarters of negative growth) in a recession. China’s GDP growth will be, perhaps, the lowest in several decades. Europe is badly hit by shortage of Russian oil/gas. None of the three can be a growth engine for 2022. India, whose growth forecast was lowered to 7.5% by the world bank, is the only large economy to show some cheer.

The choices for Indian investors are stark. There are no really attractive alternatives to equity investment. They can opt to hold on to good stocks, knowing that there could be a dip, but also that they would bounce back. Or, if they have the skills to time the market (a rare skill for sure) they could sell and try to buy back in later. Debt instruments are a poor alternative, because with every hike in interest rates, the price of the bond falls.

Retail investors are pumping in some Rs 11,000 crores a month via SIP. Their behaviour, should the market drop another 10-15%, which can happen, would be interesting. But even if a few stop their SIP, the figure may fall by say 3-4000 crores a month. The retail investor has tasted success, earning far more than a bank deposit, and, like a man eating tiger, will want more.