Home JMulraj US alliances and arrangements falling, like a house of cards 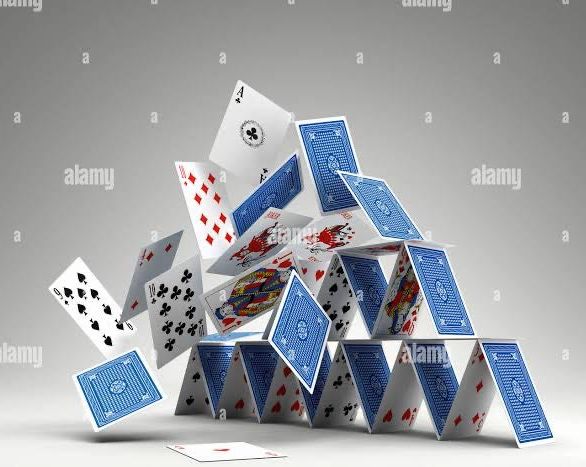 De-globalisation and de-dollarisation are worrying trends

A dip into history is necessary to understand the context.

America had, post the two world wars, taken over the mantle of global leadership from a war ravaged Britain. The 44 victorious allies in the war met at Bretton Woods, New Hampshire, in 1944, to chalk out a new global financial system to enable a post war recovery. Under the agreement, the US $ became the international currency, pegged to gold, and tradable into it at a fixed rate of $ 35/ounce. All other countries were tied to the USD and were obliged to maintain their currencies to within +/- 1% of the greenback.

In 1949 NATO was created as a defensive alliance of America and a dozen European countries to maintain peace in Europe.

After the world wars, the US navy survived; navies of other countries were depleted by the wars. America assured safety from piracy, of international sea borne trade, to other nations, in return for support against USSR. In earlier days, each nation doing maritime trade had to make its own security arrangements. So, under American protection, global trade picked up, hence, global growth.

In 1971, President Nixon took the USD off the gold standard, thereby undermining the arrangement made at the Bretton Woods conference. Since the other allies had already pegged their currencies to USD, not gold, this essentially meant the birth of fiat currency, and leeway to central banks, and Governments,  to print money irresponsibly.

In 1973 came the first oil shock. Middle East oil producing countries embargoed USA to protest its decision to supply weapons to Israel during the Arab-Israeli war. President Nixon, and Henry Kissinger arrived at a major agreement with Saudi Arabia under which, SA would price the sale of its crude oil in US $ in return for US military support and equipment. This led to the birth of the petrodollar, which is a stock of $ created by the demand for it, arising from the need of all countries to buy crude oil prices in dollars, kept outside of USA. Thus the petrodollar thus created did not add to US inflation, as the stock was kept outside.

Today, however, these arrangements and alliances are breaking.

The Bretton Woods arrangement, which underpinned exchange rates by linking all currencies to the $, which was, itself, pegged to, and exchangeable for, gold, at a fixed rate of $35 / ounce, has become unglued after Nixon abandoned the promise to redeem USD for gold at a fixed price. He did so because a lot of dollars had been printed to fund the Vietnamese war, and, if holders of these dollars had demanded gold for them, Fort Knox would have taken a knock.

The agreement with Saudi Arabia has soured after President Biden called MBS, the Saudi crown prince, a pariah, vowing never to deal with him, only to later go to him, begging Saudi Arabia to hike production of crude oil (in order to bring down gas prices before the November 2022 mid term elections in USA). MBS didn’t increase, but rather, brought down crude production, enraging Biden. Nonetheless, Biden went on to state that MBS had sovereign immunity and couldn’t be tried for the murder of Adnan Khashoggi. Perhaps he should have studied provisions of sovereign immunity before calling MBS a pariah.

This has boomeranged. Saudi is now selling its crude to China in renminbi. This move towards de-dollarisation follows Russia’s decision, in the face of US sanctions, to sell its oil/gas to China in renminbi. Just last week 9 countries have announced their intention to buy crude oil in gold instead of USD.

Another, more recent, move towards de-dollarisation is by EAEU (Eurasia Economic Union) to join with BRICS to form a new payments arrangement. EAEU, formed in 2015, is a customs union between Russia, Khazakastan, Armenia, and other countries. BRICS is an acronym for Brazil, Russia, India, China and South Africa. It has now expanded. The proposed new arrangement will use a single card, to compete with Visa and Mastercard. The single card will merge existing payment systems Mir (of Russia), Unionpay (of China), RuPay (of India), and others.

De-dollarisation dilutes the capacity of the US to control the global financial system, to impose sanctions effectively, and to print money without constraint. If it happens, whenever, it will cause a financial tsunami.

NATO was a strong partner of USA and had, despite being an alliance for defence against the Soviet Union, sent troops to Afghanistan and Iraq. And now, several European countries are openly critical of America, accusing it of making huge profits from sale of liquefied natural gas to Europe at high prices. A few NATO countries are under pressure to cave in, in order to obtain Russian oil/gas to stave off a cold winter. Citizens are strongly protesting unaffordably high energy bills.

It was the advent of globalization, thanks to strides in computational and communication technologies, that led to a huge outsourcing of manufacture and services to other countries. This ushered in a period of global prosperity, combined with low inflation. Global trade in goods and services is around $30 trillion.

Due to geo political and geo strategic reasons, global trade is declining. A fall in global trade in goods and services would negatively affect GDP growth, and result in higher inflation, and interest rates. This will be remedied through new technologies, though with a time lag. Genomics, e.g., will lead to tailor made medicines, faster drug discovery, and reduced healthcare cost. Progress in modular nuclear reactors, and, later, in fusion energy will significantly reduce energy costs. But for now, the trends of de-globalisation and de-dollarisation, will have negative effect on economic growth and on stock markets.

Last week global markets reacted positively to the hope, held out by Fed Chairman J. Powell, of a lower hike in interest rates, of 0.5% instead of 0.75%. Prices of several commodities have fallen, after China’s reduced demand because of its zero tolerance to Covid policy. However, after avoidable deaths due to a recent fire, has led to widespread protests (avoidable because local authorities had, in their zest to please masters for following the lock in protocols, had wedged apartment doors, trapping the residents into a fatal inferno). If Xi hears the pleas of his suffering countrymen and relaxes lock downs, commodity prices would rise again.

So the slowing rate of increases may be a lull, before the lullaby!

The immediate bullish scenario rests on a lower rate hike by the Fed, of 0.5% instead of O.75%, and of a ceasefire in the Ukraine conflict leading to a settlement. It may, however, be a temporary reprieve. Europe, deprived of energy, is heading into a recession, and the US also seems to be headed there. Biden wants to intervene in a rail dispute which, by disrupting freight movement (at a time when a diesel shortage already threatens it), is indicative of the looming recession risks. India’s Q3 GDP growth, at 6.3%, is slightly below expectations, but is a silver lining compared to other countries. India is well positioned to benefit from the next bull run, though after recession drags the market down prior.

Will the US be able to stanch de-globalisation and de-dollarisation?

MARKET PERSPECTIVE By J Mulraj Jan 16-22, 2022 Are we thinking things through, and preparing for them? ­­Everyone knows about coming disruptions. Three forthcoming major disruptions would be...