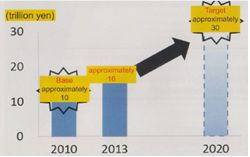 This article appeared in Business India — edition dated 23 November – 6 December.  It can be found on page nos 78 and 79 of that edition. The pdf version can be got from here 2015-11-23_BusinessIndia_Japan-Financing-structures

In the Goldilocks zone

Japan strengthens its financing arms and India seems just right to benefit from it. Japan’s infrastructure exports got a fresh fillip in March 2013 when Prime Minister Shinzo Abe held a meeting with his key planners.
At this meeting, a new body was evolved named Strategy relating
to Infrastructure Export and Economic Co-operation (SIEEC). It was
brought under the direct supervision of the Chief Cabinet Secretary of that country, who would also serve as this body’s chairman.

Since then, 21 meetings have been held discussing railways, human resources development, prevention of disasters and country/region-specific themes. Needless to say, India is invariably there on this
body’s agenda.

The reasons are not too hard to find. Since 2003, Japan has begun
to look at India with a long-term strategic viewpoint, as being its most important business partner in the future. By 2007, Japan’s Prime Minister Abe (he was prime minister at that time, before losing power, and then bouncing back as the country’s pm) and India’s Prime Minister Manmohan Singh signed the landmark document for setting up the Dedicated Freight Corridor (DFC) and the Delhi Mumbai Industrial Corridor (DMIC).

Japan had looked to China as being its most important business partner during the previous decade. But two developments made it look towards India. First, the xenophobic riots in China against Japanese business establishments made many believe that China was not too safe an investment destination. Second, disputes on sharing of sea routes were becoming shriller, which also put Japan on the guard against China.

Also, Japan needed to finalise this soon, because its exports to the US , the EU and the rest of the developed world were flagging. And its own population was ageing rapidly. It needed a base which could finance the growth of its own economic engine.

True, Japan did look to Vietnam and other South East Asian countries. But they were too small for its appetite. India seems just right – often called the Goldilocks condition. It was extremely large in terms of its appetite for infrastructure spending, technology and growth. Its economic policies had moved unerringly towards greater liberalisation. It had tasted excellent rates of return from its investments in India’s automobile sector. And it was also aware how,
over the years, Maruti-Suzuki had become a bigger contributor to Suzuki’s bottom line than other Suzuki investments worldwide.

Hitherto, most of the investments were done by jICA (Japan International Cooperation Agency). In 2013-14 alone, Japan’s ODA (Overseas Development Assistance) loans commitment to India had exceeded ¥312 billion (about ¥2 = one rupee). This made India the largest among recipient countries for ODA from Japan. Disbursement for the year stood at ¥1,456 billion and total number of ongoing projects amounted to 66. ODA loans come at concessional
rates of interest, normally of 1-2 per cent.

At the other end of the spectrum, JICA also offers grant aid (which need not be repaid), technical co-operation and citizen participation. Grants accounted for ¥1.49 billion, technical co-operation, ¥348 billion (234 Indians visited Japan in 2013-14, while 659 Japanese experts came to India to oversee projects and train its people).
India was the ninth largest recipient of this type of aid. Under citizenship participation, Japan saw eight volunteers as language support professionals, and Japan’s ngos began working with three Indian partners. No figures are available for aid under this category.

But, the older modes of financing required a relook especially after
the March 2013 meeting. As against ¥10 trillion of infrastructure related exports from Japan to the world in 2010, and about ¥16 trillion in 2013 (figures for 2014 will be ready only by mid-2016 and for 2015 a year after that), the government worked out a target of ¥30 trillion worth infrastructure exports by 2020 (see charts). Once again, it is possible that India will play a major part in such exports. Financial arms
But big plans require big financing, and that is where Japan began looking at tweaking the structure of its apex financial institutions. Now it has financing arms, such as JICA; JBIC (Japan Bank for International Cooperation); NEXI (Nippon Export and Investment Insurance); other Japanese banks, who lend for specific commercial borrowings (like Sumitomo and Mizuho); and JOIN (Japan Overseas Infrastructure Investment Corporation for Transport and Urban Development).

While JICA is primarily into ODA loans and grants (often for projects
sponsored by the host government, either wholly owned by the government or as private-public partnerships), JBIC  is a lending bank, which works closely with other Japanese banks. NEXI works as an exim bank, but is also allowed to take up equity investments in specific projects.

JOIN is the latest entrant to this team. It was established in October
2014 and is the first and only government-private sponsored fund in
Japan that specialises in overseas infrastructure investment. It supports recipient countries in building safe and reliable infrastructure through ppp arrangements and works in collaboration with other Japanese companies, banks and institutions (JICA, JBIC and NEXI) and the government. It takes up equity investment,
facilitates technology transfer and focusses on human resource development. It is its offer of the last activity (human resource development) that actually sets it apart from other financial bodies in Japan.

Skill development will be one key area to look out for in the coming
years. Besides being a key focus area of the Indian prime minister’s
office, it is also likely to involve the training of several million people
in India for a variety of projects, from building high quality bridges
(Japan is bidding for the trans-harbour link between Sewree and Panvel in Maharashtra) to maintaining and operating metro and high-speed railway projects that Japan is keen on building in this country (also see http://asiaconverge.com/2015/11/what-indian-railways-could-learn-from-japan/). A pilot project for skill development is already underway in Chennai and, depending
on its outcome over the next couple of years, there is a good possibility of such activities being scaled up phenomenally.

One of the latest recipients of JICA assistance is the Pune Sewerage Project, which involves 11 sites with a combined capacity of 396 mld (million litres daily). The total cost is ¥22 bil­lion and the loan amount is ¥19 billion.

The project is expected to start in Jan­uary 2016 and could get completed by March 2023. The project will include a sewerage treatment plant (STP); an intermediate pumping station; a cen­-
tralised SCADA for the STP; a main/sub-main and branch sewers; community toilet facility; public participation, institutional
capacity development and environmen­tal management; along with consulting services.