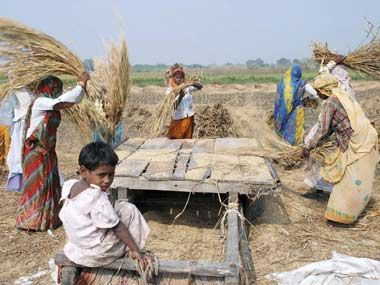 The scams in grain procurement

The spectre of rotting grains has hit media headlines once again. What most have not stated overtly is that this may not be just another case of mismanagement. It could be nothing short of fraud. It could be an attempt on the part of grain procurement officers to destroy evidence that could implicate them in a financial scam. But to set the context right, one needs to go back to September 2010, when the Supreme Court was forced to intervene. It asked the then government to give the grain away for free to people instead of leaving it to be devoured by pests or allowing it to rot in the open.

When Sharad Pawar, the then agriculture minister, tried to dismiss the Supreme Courts remarks as merely a suggestion, the apex court promptly retorted that it was an “order”, not just a “suggestion”.

Then consider the remarks made by most agronomists – including Ashok Gulati – that the government was trying to procure more grain that was warranted. Gulati had been literally crying himself hoarse denouncing the government’s procurement policy. India already has covered storage of 57.7 million tonnes if one takes the capacities of all the three parties collectively – the state warehousing corporations(SWCs), the Central Warehousing Corporation (CWC) and the Food Corporation of India (FCI)

And you now have media reports talking of two problems that seem to have afflicted the Food Corporation of India (FCI)
Crime #1: The FCI has allowed 46,658 tonnes of foodgrain to rot in its 1,889 warehouses across the country in three years.
Crime #2: The FCI has allowed another 143.74 tonnes to go missing.

Together, as some media reports stated, this could have fed nearly 8 lakh people from priority families under the National Food Security Act for an entire year.

The FCI chairman and managing director Yogendra Tripati, is on record stating, “If you look at it, a majority of foodgrains wasted in 2015-16 was due to natural calamities like cyclone. A major storage issue was seen in the 1990s and there was a problem in 2013, but we’ve more or less overcome the issues and are also going to augment our storage capacity in coming years.”

The sad truth is that India already has enough storage. Yes, these storage areas could be upgraded – from capped to covered (see chart). But as Gulati has pointed out, the present storage capacity is adequate.

So why do we procure more than what is needed?

There are two reasons for this.

First, Indian politics is invariably driven by the demands of farmers in the North much more than those of the South. As a result, the rest of India pays for the avaricious demands of the North.

Second, because the entire procurement policy of the government is aimed only at rice, wheat and sugarcane. These crops are protected, nurtured and exploited by some of the most powerful political groups in the country. They are allowed to waste water, electricity, fertilizer and even FCI’s money. Much of this is done in collusion with India’s policymakers.

Consider for instance, how Haryana is known to change the Fair Acceptable Quality (FAQ) norms for wheat, each time the crop is of inferior quality. By changing the norms, the state procurement authorities pay the farmers grade A prices for grade B wheat. When the wheat goes to the millers for being ground into wheat flour, the millers (who are also elected leaders with various political bodies in the state) raise a hue and cry over the prices at which they must purchase the wheat, and are then given a subsidy. All this is eventually financed by the taxpayer.

Take a third instance. True, FCI’s officials have gone on record to explain how they have been trying to reduce buffer stocks year after year. Instead, all they have to do is to take the entire buffer stock and sell it in the commodity markets. True, there will be a discount in the pricing when large quantities of grain is offloaded. But remember, getting one-fourth of the price is better than getting no price at all when it is devoured by rodents or let to rot.

Solutions exist, but the FCI does not want to accept them. Selling them through auctions would invite the attention of assayers, who would then have to certify the quality of grain being sold. Once the quality of grain is certified, FCI officials would have a difficult time explaining why Grade A prices were paid for grain that was Grade C. It is better to destroy the evidence, than have auditors baying for their blood.

The problem has already surfaced with the RBI demanding explanations for the missing grain. It has refused to let banks pay to the farmers the Cash Credit Limits (CCL) worth around Rs.20,000 crore. This is the amount that the Prakash Singh Badal government has sought for wheat procurement. Modi’s government is a political ally of Badal’s party. . Hence the need to bail him out is crucially important. But the stench of a scam is what keeps people wrinkling up their noses.

And do remember that the FCI procures only around 20% of the total grain. The rest is left to state procurement agencies, which then resell the grain to the FCI.

The irony is that North Indian farmers have already sought compensation for damaged crop on account of unseasonal rains. Now they want money for missing grain. And soon they will ask for Grade A payments for Grade C grain.
It is a triple whammy.

All eyes are on the Modi government to see how he handles this one.

How politics has bred NPAs and hobbled our banking system

https://www.moneycontrol.com/news/economy/policy/comment-how-politics-has-bred-npas-and-hobbled-our-banking-system-2539477.html Banking, NPAs, and politics make a heady mix in India Bank NPAs are likely to remain high as long as the government – through its...