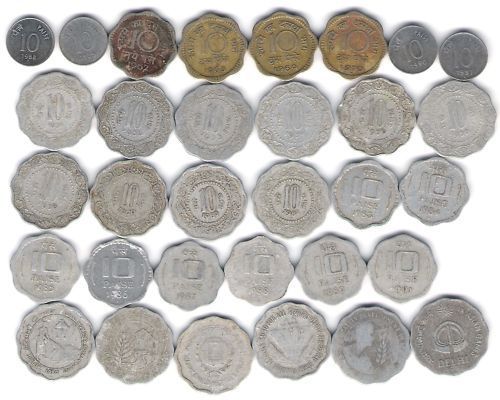 Does the govt have any policy for coins at all?

Once again, the courts have to take charge of simple administrative decisions.  This is primarily on account of the ineptness on the part of the executive. Contributing to this flaw is the lack of foresight and sagacity on the part of India’s legislators as well. The courts have been asked to intervene in a matter relating to coins and notes.  They have been petitioned — through a public interest litigation (PIL) — to look into the difficulties faced by blind persons in identifying notes and coins. Joaquim Rapose, secretary of the National Association for Blind (NAB), has filed the PIL and sought directions for Reserve Bank of India (RBI) to make changes in the coins and notes, so that blind persons can identify them easily (https://www.thehindu.com/news/national/HC-seeks-RBI-reply-on-plea-by-the-blind/article16769440.ece).

Ideally, this is an issue that should have been addressed by the executive – by the finance ministry’s officials.  The Reserve Bank of India (RBI) has often made it clear that it does not deal with coins.  This is the jurisdiction of the government. These officials also decide on the look, feel and weight of the coin.  The RBI then takes these instructions and gets its mints to produce the coins under high security.  Unless of course they are to be imported – which has happened a few times in the past.  Even that decision is taken by the finance ministry.

But then don’t the finance ministry’s officials know that the basic conventions of numismatics recommend that coins should be made in such a way that all coins of a similar value should have the same shape and weight? True, the lettering and design may change.  But the size and weight ought to be the same.  This way, even a visual glance, or the feel of the coin, should be enough for anyone to know its value. One would have thought that this was common sense. The best of countries adopt this convention.

But this basic convention has been thrown to the winds.  Just look at some of the instances depicted in the chart alongside.

There are at least six – if not more – versions of the Re.1/- coin.  Initially, this coin was issued along with the Re.1/- note and both co-existed for almost 47 years.  Then the note was discontinued. However, it is printed in small quantities occasionally, because Indians love to add a Re.1/- note to any amount when gifting money. So a Rs.100 gift becomes Rs.101/- and Rs.500 become Rs.501/-. But for all practical purposes, the one-rupee note has ceased to exist.

Why can’t the ministry respect common sense?  Whimsicality prevails.  Hence what should have been decided by the executive has now reached the courtrooms.  Then when ministers talk about judicial over-reach, they should first ask themselves where the rot begins.

In fact, one of the worst aberrations took place under UPA-2 when the Rs.5/- coin sported the image of Vaishnodevi (http://www.asiaconverge.com/2013/11/is-the-govt-promoting-religion-through-coins/). This time it wasn’t a Hindutva party.  It was introduced under the charge of PC Chidambaram, the finance minister at that time.

Also consider the way the 10 paise’s design (this coin is now discontinued) was ‘borrowed’ to produce Rs.2 coins.  This coin too underwent several changes.  The latest Rs.2 coins are often confused with Re.1 coins.

Since the executive has discarded common sense for coins, the matter will now be de3cided by the courts.

This is precisely what happened when the apex court had to ban the use of minor children in human pyramids. It also disallowed human pyramids more than 20 fit high during Janmashtmi celebrations that are often promoted by political parties masquerading as social groups.  This too was a decision that should have been taken by the executive or the legislature.  When both failed, the courts had to step in.

The same reasons compelled the judiciary to step in with measures to control noise pollution.  When the executive and the legislature failed to control indiscriminate use of loud-speakers, or the hurtful noises from drums and cymbals, the courts had to step in again. This is what happened with air pollution as well.

It is at such times that savvy investors begin to worry. Is India a safe investment destination, they ask.  Can a country be considered safe where both the executive and the legislature repeatedly fail in meeting their obligations to protect common people?

The mismanagement of rules and conventions on the coins front is just another symptom of the tremendous cleansing that has to take place within the executive and the legislature.  Unless they put the woes of common people first, they cannot expect India to emerge as a global power.

A global power plans, protects, and puts into place regulations to ensure that even the weakest people are protected. It anticipates problems and redresses them. It is proactive; not reactive..

India’s executive and the legislature need to be educated on these basics urgently.

The author is consulting editor with FPJ

https://www.freepressjournal.in/analysis/five-thriving-myths-about-waste-management Five things about waste management that we are mistaken about RN Bhaskar  --  September 19, 2019 The last few months, politicians of all colours have begun...