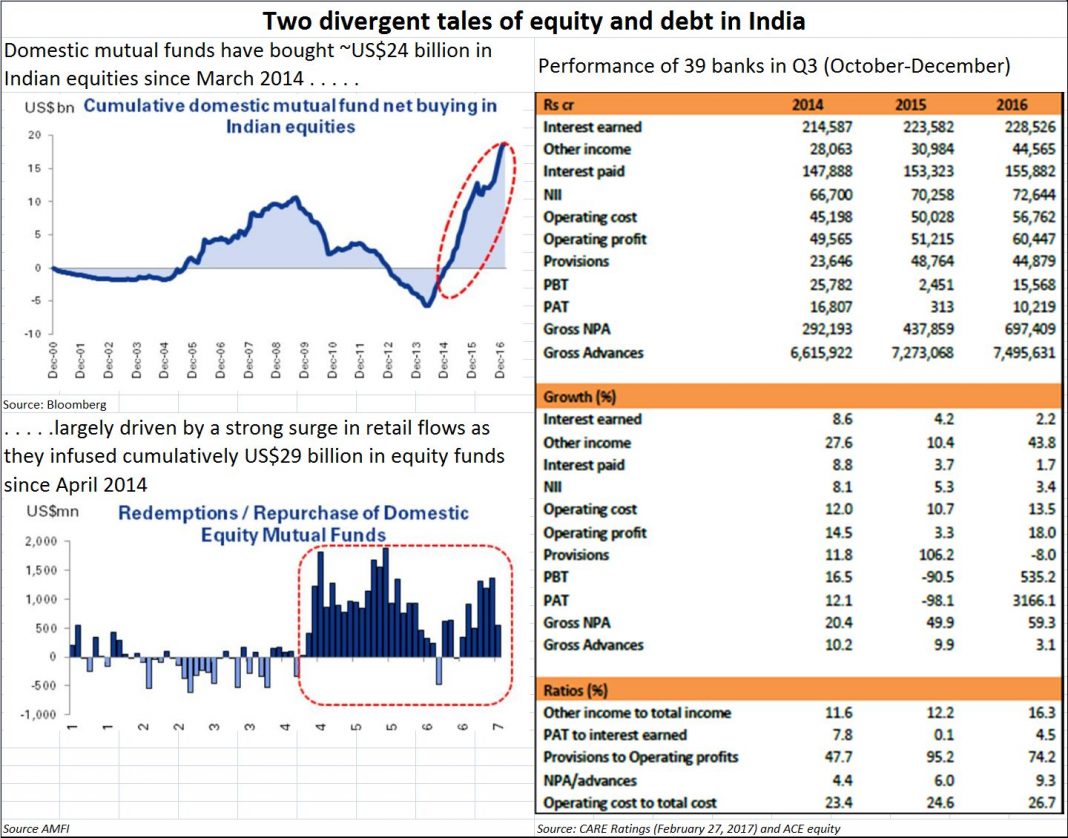 Equity markets soar; but banks languish for the want of customers who want debt

India perplexes.  That’s an adage that many have grown to live with.  And nothing confirms this perplexing picture as the story of equity and debt since 2014 (see chart). Both suggest a story of growth and health.  But pay attention to the unspoken words, and a different picture begins to emerge. It is worrisome. In a paper of Feb 27 this year, CARE Ratings analysed the performance of a sample of 39 banks. This included 24 PSBs (public sector banks) and 15 private banks for the third quarter of FY17.

And the figures startle.

The banks made less money from their traditional business of lending and earning interest.  In fact, net interest income (NII) growth has been declining in the last 2 years from 8.1% in 2014 to 5.3% and then to 3.4% respectively.  This performance has been drawn down by the PSBs, which have witnessed negative growth of 1.8% and 0.8% in the last two years.

Another worrying sign was the the provisioning for NPAs had slowed down sharply. One reason, says CARE, could be because of very high provisioning being made in in 2015 following RBI’s guidance.  But gross NPA continued to soar – by as much as 59% in the latest year.

In sharp contrast to the banking sector, equity markets continued to hold out hopes.  Most analysts expect the markets to soar further. And unlike as in earlier times, the growth appears to be spurred on by domestic mutual funds.  Fresh foreign direct investment (FDI) flows remain weak, and it is still uncertain when they will revive.

Currently, existing companies in India have increased their investments to make themselves more competitive.  Investments by the likes of Vodafone, PayTM and other such players are the exception. Most global experts believe that FDI flows will increase only when the government is able to ensure investment protection to foreign investors.

Further investments in the markets will thus depend on two factors.

First will be the government’s ability to kickstart private investments.  That will achieve three objectives: (a) it will create jobs – something the government is unwilling to talk about; (b) it will help the banks which currently witness a surge in deposits with no corresponding credit offtake; (c) it could lead to more foreign portfolio investments (FPI).  Remember, FDI inflows generally warm up after long-term FPI players begin to feel comfortable.

For now, the current GDP growth rate of 7% appears to be another quarter of jobless growth.  In fact, with demonetisation killing several jobs, there could be a negative growth during the last quarter. As CARE points out, there is a negative relationship between GDP growth and NPA growth. A recovery in the economy, which is expected in FY18, would help to control incremental growth in NPAs.

In any case, with the real estate and construction sectors being in the dumps, bank NPAs could increase further, since a good part of the advances were made for real estate (http://www.asiaconverge.com/2017/01/demonetisation-has-made-govt-richer-people-poorer/). A lot will depend on how convincingly the government can use affordable housing to mitigate the pains that these sectors have suffered post-demonetisation.

Another key factor will be the role epayments will play in the country.  The government’s policy announcements of last month do not inspire confidence (http://www.asiaconverge.com/2017/02/epayments-the-rbithe-cabinet-secretary-and-the-govt/).  However, one thing is certain.  The biggest beneficiaries of epayment will be financial intermediaries (http://www.asiaconverge.com/2017/02/epayments-spell-boom-times-for-financial-intermediaries/).  They may be the only ones laughing their way to the bank.

Then there are the uncertainties.  Will the merger of five PSBs into SBI help accelerate credit offtake?  Will small banks be able to help the micro and small and medium enterprises (MSMEs)? After all, this sector is the backbone of both employment and economic growth in the country (http://www.asiaconverge.com/2016/12/want-to-uproot-corruption/). Unfortunately this is also the sector most adversely affected by government-led extortion and corruption.

One only hopes that the unemployment spectre is put to rest quickly.

The author is consulting editor with FPJ

http://www.freepressjournal.in/analysis/slums-show-disrespect-of-politicians-for-democracy-r-n-bhaskar/1358963 India’s slums reveal politicians' contempt for democracy — By RN Bhaskar | Sep 20, 2018 Legislators are supposed to uphold the Constitution.  That includes a commitment to democracy,...