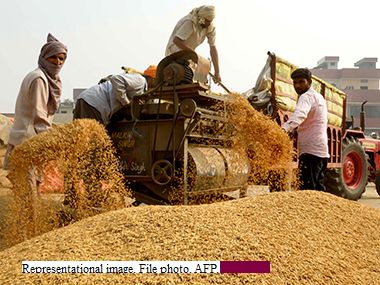 Should agriculture be taxed. No says, Jaitely. Why not, say others. In the last week of April 2017, Niti Aayog member Bibek Debroy lobbed what could euphemistically be called a hot potato into the lap of the finance minister Arun Jaitely (http://www.hindustantimes.com/business-news/tax-agriculture-income-says-niti-aayog-member-debroy/story-Hv5IiKtLXfJ4ILSl0xp86M.html). He wanted agriculture to be taxed. The alacrity with which the FM reacted to this proposal was much more interesting than the Debroy suggestion. Debroy made a strong case for taxing agriculture income.  This was in sharp contrast to the government’s stated position.  It may be recalled that even while and after submitting his budget proposals, the FM had categorically ruled out taxing agriculture. On March 22, he even emphatically informed the Parliament that “Agriculture income is not taxed and will not be taxed”.

Later at a press conference, Debroy stated that he would like to see the government “tax [the] rural sector, including agriculture income above [a] certain threshold.” Some people thought that Debroy was tilting against windmills, because taxing agriculture income is a politically sensitive issue and successive governments have refrained from doing so.

“At best . . . instead of using agriculture income for one particular year, what I could do is I average it over three-year period or maybe over a five year period — as agriculture income is subject to annual fluctuation. Barring that the threshold should be the same [as other taxpayers],” added Debroy, at that conference.

In May 2016, the Prime Minister’s Office had advised the NITI Aayog to prepare documents on 15-Year Vision, Seven-Year Strategy and Three-Year Action Agenda.

In a sharp rejoinder to Debroy’s suggestion, the FM stated (http://www.livemint.com/Politics/kuIRUgTWs93BlntQixR0jP/No-plan-to-tax-agricultural-income-rich-farmers-very-rare.html)  that it did not make sense to “start taxing agriculture” at a time “when you need to support it because of (agricultural) distress.” He further went on to say that “In any case, the central government has no power (to tax farmers). It is the power of state governments (to tax farm income) and my own view is that none of the states is going to do it.”

The FM was clearly wrong on three points.

First, agriculture is stressed only for small farmers, bot the fat-cat farmers. Large farmers have always found a way to beat the odds.  They either manage to persuade the Food Corporation of India (FCI) to purchase their grain – even at inflated prices – or by getting the government to bail them out in other ways (http://www.firstpost.com/business/why-does-govt-continue-to-procure-rice-and-wheat-in-a-big-way-but-ignore-nutritional-crops-3425982.html).  In any case, the small farmers do not earn more than the exemption limit that most tax payers across the country enjoy.  That is why calling all farmers stressed is wrong. The FM should also look at the ways large farmer-legislators thrived even as farmers starved, (http://www.firstpost.com/business/the-great-indian-irony-farmers-starve-while-politicians-agriculture-income-continue-to-rise-3360212.html) Second, the FM does not even need to tax farmers.  He has only to find out if the income declared as agricultural income was actually from agriculture.

All that he has to do is to allow the income tax department to prepare a ready reckoner for agriculture the way the government has for real estate. That would allow the department to easily disallow non-agricultural income from being wrongly declared as agricultural income.  This ready reckoner should clearly outline the maximum amount that could be earned per acre of land in specific areas.  If the normal yield is Rs.5 lakh per acre, and the highest yield could bring in Rs.10 lakh, then the norm should trteat excess income as non-agricultural, and thus subject to taxes.

In fact, this is what happened in 2011 and 2012 (see chart). Some 8 lakh farmers declared agricultural incomes of a collective (hold your breath)  Rs.874 lakh crore.  The figure was at least five times the total GVA (Gross Value Added) for the two years combined. It also represented 66 times total direct taxes collected over those two years (http://www.asiaconverge.com/2017/02/agriculture-as-laundromat-error-or-coverup/ ).

This matter might not have come to light had it not been for a PIL (public interest litigation) filed by a retired income tax officer before the Patna High Court.  The petition asked the court to direct the income tax authorities to release the names of the top 1,000 assessees who had declared huge agricultural incomes.  According to the petition, the total agricultural income filed exceeds Rs.2,000 lakh crore. Phew!!!

The FM has thus not done the following

Yet the finance minister – once again, a couple of days ago – reiterated that farm income will not be taxed.  But then wouldn’t that be contrary to the government’s espousal of transparency and equality?

The minister’s refusal to tax agriculture raises even many many questions.

http://www.firstpost.com/business/budget-2017-should-look-at-these-7-areas-to-kick-start-economy-create-jobs-3216160.html Budget 2017: seven things that could help government galvanise economy and create jobs Jobs needed desperately.  That was the writing on the wall even in...