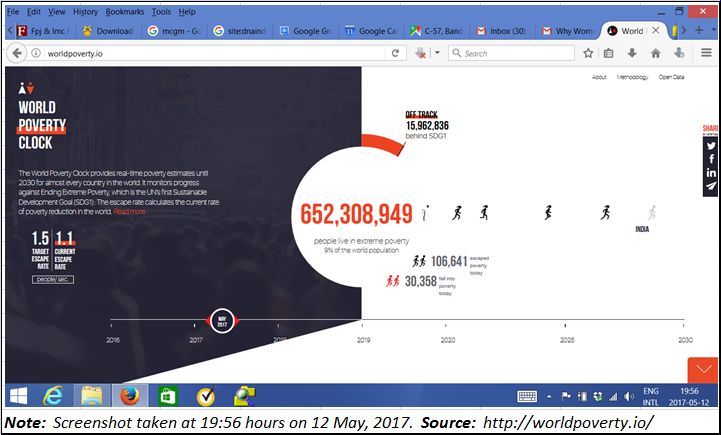 India could learn a few things from the World Poverty Clock

Asia could be getting out of poverty faster than many countries in the developing world.  This — and a great deal of incredible data — can be found on the website of the world poverty clock — http://worldpoverty.io/. This is a brilliant concept developed by economists to get a grip on the magnitude of poverty in the world. It was launched on May 10, 2017, at the re:publica tech conference in Berlin. It is as the Brookings Institute puts it (https://www.brookings.edu/blog/future-development/2017/05/10/making-everyone-count-a-clock-to-track-world-poverty-in-real-time/?utm_campaign=Brookings%20Brief&utm_source=hs_email&utm_medium=email&utm_content=51842628), the ﬁrst attempt to develop a real-time global model for poverty with projections until 2030.

For instance, the website tells us that the challenge is enormous. “Poverty is expected to rise in 27 countries (19 in Africa, four in the Americas, 3 in Asia and one in Oceania). This means that in these countries the number of poor will increase from 287 million people to 345 million by 2030.”

India, however, has a lot to be pleased about. The good news is that Asia is witness to 80.1 people clambering out of poverty every second, as against the required minimum target of 29.7 — if Asia has to escape poverty altogether by 2030.  Extreme poverty is itself described by the UN as those who live on less than $1.25 a day (http://www.un.org/sustainabledevelopment/poverty/ ).

There is another reason to feel pleased, says the UN website: “Extreme poverty rates have been cut by more than half since 1990. While this is a remarkable achievement, one in five people in developing regions still live on less than $1.25 a day. Moreover, there are millions more who make little more than this daily amount. Plus, many people risk slipping back into poverty. . . . . Economic growth must be inclusive to provide sustainable jobs and promote equality.”

Another UN document (http://www.un.org/sustainabledevelopment/wp-content/uploads/2016/08/1_Why-it-Matters_Poverty_2p.pdf) points out that lower middle-income countries, including China, India, Indonesia and Nigeria, are home to about half of the global poor. However, ever since this document was published, China has managed to lift almost 90% of its people out of poverty. This is an amazing achievement indeed.  Asia’s excellent numbers are largely due to China’s achievements.

India too seems to have done well. Prime Minister Modi’s plan of doubling rural incomes could catalyse this climb out of poverty. But a word of caution is required here.  Some of India’s numbers do tend to get inflated by overzealous officials.  For instance, the former education minister, Kapil Sibal tried to inflate the numbers of Indian school children moving from primary to secondary education by making compulsory all promotions till Std VIII (http://www.asiaconverge.com/2016/12/fudging-education-data-produces-sludge/).  Mercifully, the present government is in the process of reversing this horrifying decision.  It is important to remember that without good school education, the chances of slipping back into poverty can be very high. However, when it comes to poverty, the government has not yet made up its mind about what benchmark it should use for defining poverty.

There is another cause for concern.  The going has been good for India till now.  But with the Middle-East cutting back on migrant workers, and the US cutting the number of visas for Indian workers, this country needs to re-work some of its strategies.  Urgently.

One option could be to lobby hard with countries that desperately need reconstruction – Iraq, Syria and Libya are some names that top the list.  But then there are countries like Afghanistan and Iran where India needs to move quickly and grab contracts with brilliantly structured deals that benefit all parties concerned. Unless this is done, India will see the numbers of unemployed swell. Its remittances could also shrink considerably.

In fact, the government should take a lesson from what Tata Power is doing with Russia.  It is helping that country exploit a large coal mine in East Russia, build a railway line, and even set up a port there.  After all, Russia is one country which holds out enormous possibilities for India – and where both countries can benefit enormously (http://www.asiaconverge.com/2017/04/india-russia-yo-years-of-friendship/).  Russia needs workers to unlock its mammoth reserves of mineral wealth in its large land mass.  India can play a big role here, given the right agreements and conditions. The Modi government should be working on facilitating many more such deals.

There is another lesson that the Indian government should learn from the Tata Power project in Russia.  It should look at the way this Indian company has wrested contracts in several countries overseas.  It should then compare that list with the list of projects India has allowed Tata Power to set up within this country during the past decade.  It should then ask itself the question: why have we not been able to exploit the capabilities of an Indian company within India?  When good companies and talented people are not given a chance to grow within India, they will look overseas.  The government needs to redress such a situation urgently.

Finally, the government needs to work on the employment front urgently.  For three years, India has witnessed a jobless growth.  When people don’t get jobs, and the unemployment rate rises, many people could slip into poverty once again. 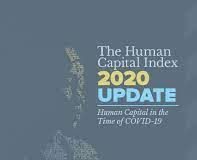 https://www.freepressjournal.in/analysis/policy-watch-india-loses-focus-on-human-capital Human capital is what India ignores to its peril RN Bhaskar Quite often, it is what the government does not want to talk about that defines...