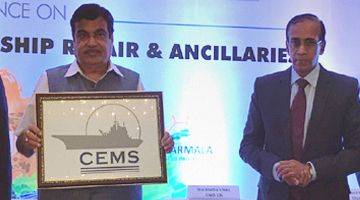 CEMS: Training people for the waters

An announcement made by India’s ministry of shipping (MoS), in the last week of November 2017, went almost unnoticed by most people in the media. The only exceptions were trade publications concerned with the shipping industry. The announcement related to the setting up of a world class centre of excellence in maritime and ship building.

This facility would serve two purposes. First, it would provide skilled manpower for the shipbuilding and maritime sectors. Second, it would give a boost to the ministry’s efforts to wean the country away from road transport and focus more on water based transport – either along the sea coast or through inland waterways.

Referred to as CEMS (Center of Excellence in Maritime and Ship Building), this project is being funded almost entirely by Siemens (see chart alongside). True, both the MoS and the Indian Register of Shipping (IRS) are also stakeholders in this project, but their contribution is only to the extent of around 6.5% each. The total project cost is estimated at Rs 766 crore. CEMS, says the ministry, will aid its flagship Sagarmala programme.

The MoS’ financial contribution is towards capex for procuring of machinery, creation of classrooms, workshop and labs etc., and is a one-time, non-recurring grant of Rs 50.07 crore. An equivalent amount has been raised by IRS. The land and building for Vishakhapatnam campus has been provided by Indian Maritime University (IMU) and that for Mumbai campus by IRS.

As Nitin Gadkari, minister of Shipping, Road Transport & Highways, Water Resources, River Development and Ganga Rejuvenation stated at a conference in Cochin, CEMS will have campuses at Vishakhapatnam and Mumbai, and will provide industry-relevant skill development, equip students with employable engineering and technical skills in the port and maritime sector and contribute to the Government of India’s ambitious Sagarmala programme.

The significance of this project can be best understood by taking into account that for the past seventy years, India has focused on promoting road transport. Today, anywhere between 50-60% of Indian cargo travels by road. This is despite the fact that road transport is the most expensive, and is more prone to accidents and theft.

According to many experts, a rule of thumb formula to define transport costs is that if shipping by high seas costs 1 (per tonne per km), coastal shipping and water transport would cost 3-4.  Railway costs would account for 6-7 while road transport could cost as much as 12 (http://www.asiaconverge.com/2016/11/india-waterways-a-gamechangerrobust-water-transportation-can-help-india-drastically-cut-freight-costs/). A series of misadventures and the focus the British gave to the railway network they had set up, caused riverside towns to lose their significance. More attention was paid to towns connected by rail (and road). The present government wants to change this, and bring back India’s focus to waterways and coastal transportation. An inevitable bottleneck will be the shortage of trained manpower for navigating, servicing and even building these vessels. CEMS hopes to address this. It will, thus, have one centre of excellence, though there will be two campuses – at Mumbai and Vishakhapatnam – thus adopting a hub-and-spoke model. The total capacity of the COE is targeted to be 10,512 students per year – though capacity utilization will proceed from 20% in the first year to 40%, 60% and 70% in the second, third and fourth year respectively.

Significantly, the fees to be charged to domestic students will be one-fourth, which foreign students will have to pay. Even so, international students will pay fees that are lower than those prevailing in the market. It will cater to courses relating to ship design, manufacturing, operating and maintenance, repair and overhaul (MRO),  and aims to become an international nodal centre in South Asia, attracting students from neighboring countries like Sri Lanka, Bangladesh, Thailand, Malaysia and Indonesia for skill development in the ports and maritime sectors. Effectively, CEMS will cater to the needs of the government’s Make in India and Skill India programmes in the maritime sector. It will also provide the manpower required to make vessels for inland waterways, ships, fishing boats and other ancillary manufacturing sectors.

CEMS will be run by Siemens for two years and thereafter by a Special Purpose Vehicle (a Section 8 nonprofit Company) promoted by IRS. Siemens will handhold this SPV in the third year. The training will be of two types: full time and co-curricular training (i.e. along with regular courses in ITI and polytechnics and engineering colleges). The centre would operate on an open technology platform and provide scalable, modular and independent self learning interactive modules based on Digitally Advanced Interactive System. It is expected that CEMS will become a global hub for quality skill development in the port and maritime sector and provide skilled manpower for India’s ship building and repair industry.

The government’s education department could learn a great deal from this project. It has embraced the technological support provided by one of the most respected brands in the world, and has allowed it to steer the course of the training institute till it can take care of its own needs.  Maybe, it should allow such models for basic schooling as well, which has all but collapsed in India. Even professional education – where good colleges have very few seats (causing a black market to flourish), and the rotten colleges go abegging without students. Not surprisingly, Nasscom, too, admits that only 17.5% of Indian engineers are employable.

A market approach, which focuses on outcomes rather than ideological agendas, is what India needs more than ever. One only hopes that other arms of the government will emulate such practices.

Who is a voter, pray tell us?

https://www.freepressjournal.in/analysis/who-is-a-voter-pray-tell-us Who is a voter, pray? RN Bhaskar  --  9 January 2020 Battle-lines are drawn between those who object to the Citizenship Amendment Act (CAA) and those...