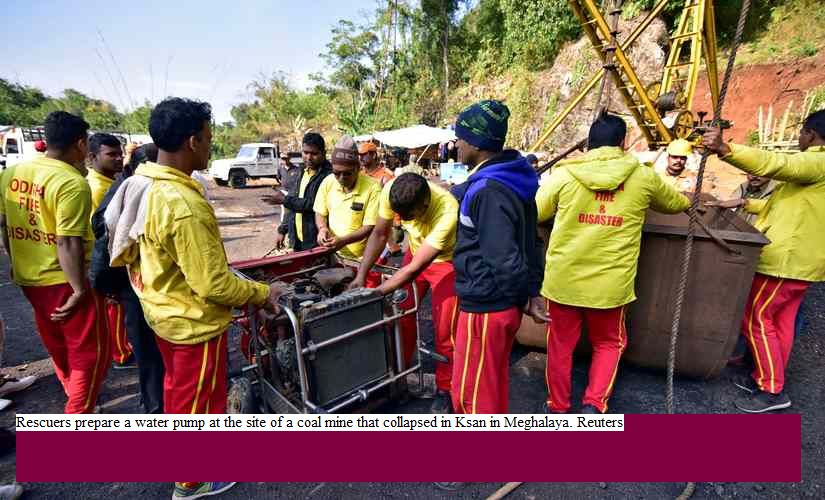 Illegal mining is like slavery.  People can justify them with specious logic – as Karl Popper would have loved to explain – by saying that it offers livelihoods and allows people to earn something with which they can find food to fill their stomachs.

But it is exploitative nonetheless – as brutal as slavery. It is also theft, because it steals from the state and the nation the taxes and royalties that would otherwise have provided facilities to the poor and the needy.

It is also rapacious – because it does not tolerate any legal and organised mining to come up nearby, lest its own clandestine earnings get threatened.

Yet successive governments have abetted illegal mining. Its legislators have apparently benefitted from and fattened themselves on the ill-gotten gains that it brings. The enormous difference between the fines collected, the absence of illegal mining data in the government’s reports and the measly amounts it got as fines when incidents of illegal mining are detected appear to bear this out.

Confirmation of these fears can be got from the various documents submitted before the Lok Sabha and the Rajya Sabha, which can be downloaded from the links provided below.  They have been stored on our servers because they are not easily traceable on the government’s own websites meant for public scrutiny. And when such documents are actually found, they are without the annexures that are critical to understand the seriousness of issues involved.  A summary of the findings can be found in the table alongside.

The story of illegal mining would possibly not have become public knowledge had it not been for the politicians themselves who tried to blow the whistle.  It was pushed into the limelight when the Congress which ruled at the centre encouraged investigations by the CBI and the Lok Ayukata into illegal mining – first in Karnataka and then in Goa.  In fact, as the table above shows, these two states were never big players in the illegal mining business.  But they were ruled by the opposition.  That possibly made their acts more reprehensible.

Maharashtra was a bigger culprit.  But this state had possibly ensured that all parties shared the spoils from illegal mining.  So no major convictions took place in this state.  Watch the fines collected against the number of cases registered.  Even if the seized vehicles had been auctioned, the amounts collected would have been higher.  It was clearly a charade.

Thus, in 2008, the Lok Ayukta report in Karnataka was tabled.  It uncovered major violations and systemic corruption in mining in Bellary. Contrary to government and media reports that only 200 trucks were carrying ore each day, the Lok Ayukta put the figure at 4,000.

The rest was to have been expected. In 2010 Justice Santosh Hegde resigned from the post of Lok Ayukta on account of pressure and non-cooperation of the state government. The state government fell, and the Supreme Court banned mining in Karnataka.  A similar story took place in Goa where in September 2012 all 90 iron ore mines in Goa were ordered to be shut down by the apex court.

Yet, at the same time, the government kept on talking about the huge potential mining had in India.  This was reiterated in its annual report for 2010-11 (http://www.asiaconverge.com/wp-content/uploads/2019/01/Illegal-mining_-North-east-ministry-2011.pdf).

The government was also quite aware that legal and organised mining was not easy to implement.  Lafarge lost a great deal of money in trying to combat environmentalists who did not want it to set up a cement plant in the North East (http://base.d-p-h.info/en/fiches/dph/fiche-dph-8889.html).  However, nobody in the government bothered to ask the environmentalists whether they had registered any cases against illegal miners.  There is nothing in the Lok Sabha or Rajya Sabha replies to show that serious action had ever been taken against illegal miners.

Consider the pathetic amounts collected by way of fines in other states, including Karnataka and Goa and compare them with the fines lapped by states like Odisha.  That state alone slapped penalties ranging between Rs.8,000 crore and Rs.60,000 crore on illegal miners:

The only time protests against mining by environmentalists took place was when legal and organised mining tried to set up their businesses – whether it was Posco and Vedanta in Odisha or Nuclear Corporation of India and Lafarge in the Northeast.

Even while the guns were being trained on Karnataka and Goa, the government presented data which had no information on illegal mining in the North East.

The first such instance was on 10 December 2012 (Rajya Sabha Unstarred question No.1782 — http://www.asiaconverge.com/wp-content/uploads/2019/01/illegal-mining_2012-12-10_Rajya-sabha-mining.pdf). This flies in the face of submissions by the Meghalaya legislators in the state assembly that each one of them was engaged in 20-30 mines, but which they closed only in 2014 after the National Green Tribunal (NGT) banned all mining in the state [please give the URL of the first part of this article].

Then – in 2013 — came the report of the Justice M.B. Shah Commission of Inquiry for illegal mining  of iron ore and Manganese.  The first part of the report can be found here http://www.asiaconverge.com/wp-content/uploads/2019/01/Illegal-mining_2013_M_B_Shah_Interim-Report_on_illegal_mining6.pdf. Unfortunately, it too focussed on Odisha, Karnataka and Andhra Pradesh.  The North East was ignored.

The reluctance to even consider the North East was obvious in the actions of the government.  This is evident from the minutes of the coordination cum empowered committee on mineral development and regulation that was held on 15 January 2013 (http://www.asiaconverge.com/wp-content/uploads/2019/01/Illegal-mining_2013-01-15_Minutes-CEC-Mining.pdf).  Copies of minutes were sent to most mining states.  But not to the North East.  This was despite the government having access to the maps of the department of mining which showed the rich mining potential in the North East (pg 24 of the government’s own ‘Exploration and Mining Opportunities in India — An Investor Guide’, Ministry of Mines, Government of India, August 15, 2015 (https://mines.gov.in/writereaddata/UploadFile/ExplorationandMiningEbook.pdf and

The government knew about the problems that Nuclear Corporation of India was facing in setting up its mining facilities there, and the challenges faced by Lafarge as well.  Moreover, as the recent statements of the legislators in Meghalaya show, there were hundreds of such mines in operation at that very time.   Clearly, the government did not want anyone to focus on the North East.   This was despite another presentation of the government – on 5 March 2013 – showing maps which identified the North East’s mineral potential (see slide 13 of the presentation at http://www.asiaconverge.com/wp-content/uploads/2019/01/Illegal-mining_2013-03-05_presentation-mining-investment-opportunities-India.pdf).

Look at several other submissions made by the government

Now compare this with the jottings in the CBI’s diary about the ill-famed Saradha Scam.  It noted that as much as Rs.1,000 crore had been diverted for investment in illegal mines in Meghalaya.  Clearly the fines are a joke!

So now you have the Supreme Court trying to get the information that the state was to have supplied all along.  The silence of the legislature and the bureaucracy on the issue of illegal mines is stunning.  It is just the example of collusive governance, and mass-scale exploitation one often associated with tin-pot dictatorships; not with a well-functioning and responsible democracy.

Can the Supreme Court help remedy the situation?

Farmers Day: Free the farmer; First from the government’s caprices and...

https://www.freepressjournal.in/india/free-farmers Free the farmer from the government and from middlemen RN Bhaskar  -- Monday, December 23, 2019 Agriculture may contribute to just 14 per cent of India’s...