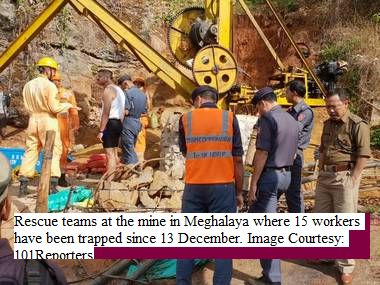 Meghalaya squirms about its coal mine  – the exposure is shaming the entire region.  Rightly so.

The entire north east of India is squirming.  Not just Meghalaya.  The spotlights were turned on by sheer accident.  Had it not been for one lone survivor, the tragedy of Meghalaya rathole mine disaster which has trapped (and possibly killed) 15 miners would probably never have got exposed. The problem began with Sayeb Ali of Panbari, Assam who was working in the mine.  He survived, and raised the alarm. The government machinery was caught with its pants down. The first reports stated that the government was still trying to ascertain if the mine was legal or not.  But BBC promptly came on the airwaves categorically stating that it was an illegal mine. It even broadcast interviews with activists who talked about musclemen who prevent any discussion about illegal mining.

Finally, it was the Supreme Court which moved – once again, it had to step into the vacuum created by legislative inaction.  One more example of how judicial overreach is on account of legislative lapses of omission and commission.  It appointed noted activist Colin Gonsalves as its amicus curiae, and a report was sent to both the apex court and to the state assembly.

That in turn caused the state assembly to discuss the issue (https://indianexpress.com/article/north-east-india/meghalaya/meghalaya-mine-collapse-beyond-the-tragedy-for-states-politicians-mining-their-own-business-5514435/), and some lame confessions began tumbling out.  Some of them came from the mouths of

The legislators are now demanding regularisation of the illegal mines. Quaint, ain’t it?

What is not talked about is that when the ban on mining came in 2014, the legislators made a plea to the Supreme Court to allow the state to sell the coal that had already been excavated, and was lying on the roadside.  The court relented, and allowed the state to sell the already-excavated coal. Illegal miners took refuge under this ‘shelter’ and continued mining coal. . According to informed estimates, the coal mining in this region alone is approximately 2 million tonnes a year.

The current mining disaster rips apart the veil of how this shelter is being misused.  Now the Supreme Court has also taken immense umbrage at the lackadaisical efforts is trying to evacuate the bodies of the men buried inside the mine.  Unlike Thailand, where pumps were put into operation almost overnight, in Meghalaya only 3 of the 20 odd pumps are being used.  Kirloskar pumps which were much in demand in Thailand, have reportedly not even been requisitioned. Next week should see the Supreme Court look into this issue as well.

But the current mining disaster is not the first time illegal mining has come to light.  Around 2010, an intrepid AP photographer travelling through this area and captured graphic and immensely disturbing images of the horrendous conditions in the mines there. Some of them can be found at at https://www.businessinsider.com/photos-indias-illegal-coal-mines-2012-10?IR=T.

Poverty drives people – even from neighbouring states — to take up these inhuman working conditions to earn a few bucks.  To escape the misery of workday lives, most youth take to drugs.  That is also the picture that governments in North-East India do not want to show – especially in mining mineral rich states of Mizoram and Meghalaya.

In order to understand how rich the North East is in mineral deposits, just take a look at pg 24 of the government’s own ‘Exploration and Mining Opportunities in India — An Investor Guide’, Ministry of Mines, Government of India, August 15, 2015 (https://mines.gov.in/writereaddata/UploadFile/ExplorationandMiningEbook.pdf).

Meghalaya, for instance, is largely an agricultural state, but has sizeable deposits of minerals like coal, limestone, uranium, granite, kaolin, clay, glass sand, silimanite, and small quantities of feldspar and iron ore, quartz, bauxite, and rock phosphate (https://www.india-briefing.com/news/mining-northeast-challenges-opportunities-state-meghalaya-11661.html/). Since April 2014, the Government of Meghalaya has given 16 leases to mine limestone reserves in the state. 68 percent of the limestone mined is used by cement industries and the remaining 32 percent by lime manufacturers. Apart from coal and limestone, the state has the third richest reserves of uranium after Jharkhand and Andhra Pradesh. A significant amount of it has been discovered in Domiasiat and Porkut-Nongjri in the Wahkynshi area of the west Khasi Hills. The Uranium Corporation of India Limited (UCIL) proposes to mine the mineral in the state, but operations have been stalled in the exploration phase due to local opposition (http://news.bbc.co.uk/2/hi/south_asia/3000991.stm).

But setting up organised mining has not been easy here.  Politicians use NGOs to complain about environmental degradation and keep organised mining out.  It is worth recalling the huge controversy that was created when Lafarge decided to set up coal mining in the North East  (http://base.d-p-h.info/en/fiches/dph/fiche-dph-8889.html). So the travails of the Uranium Corporation too are part of the pattern adopted by illegal miners across India. Remember how the Posco and Vedanta mining plans in Odisha got derailed?

In Meghalaya, much of illegal mining involves making small pit-holes commonly known as Rat-Hole Mines. The mouth opening of the pit is hardly one metre wide.  It is through this hole that miners crawl and excavate coal and other minerals. These mines are around 50-100 metres deep in length from the opening. They also have horizontal shafts branching out from the main hold. The coal is loaded in small wooden barrows, brought outside the pit hole to be loaded onto trucks. Since much of the mining is illegal, nobody has maps to the tunneling of these mines.

But even earlier than the Lafarge episode, Meghalaya was witness to mining disasters.  The most notable was the one in 1992. That was when nearly 30 mine labourers in South Garo Hills were caught in a similar flood. Half of them are believed to have survived.  The bodies of the rest were never found.

What is surprising is the manner in which successive governments have kept quiet about what has been happening in the Northeast.  In India, scams (even mining scams) surface only when some politician decides to blow the whistle.  The executive arms of investigation and law enforcement are not allowed to act or even begin investigations till they are permitted by the legislature.  Even the recent move by the government to prosecute Akhilesh Yadav for illegal mining operations (http://www.asianage.com/india/all-india/060119/akhilesh-yadav-may-face-cbi-heat-in-illegal-sand-mining-case.html) appears to be political in nature.