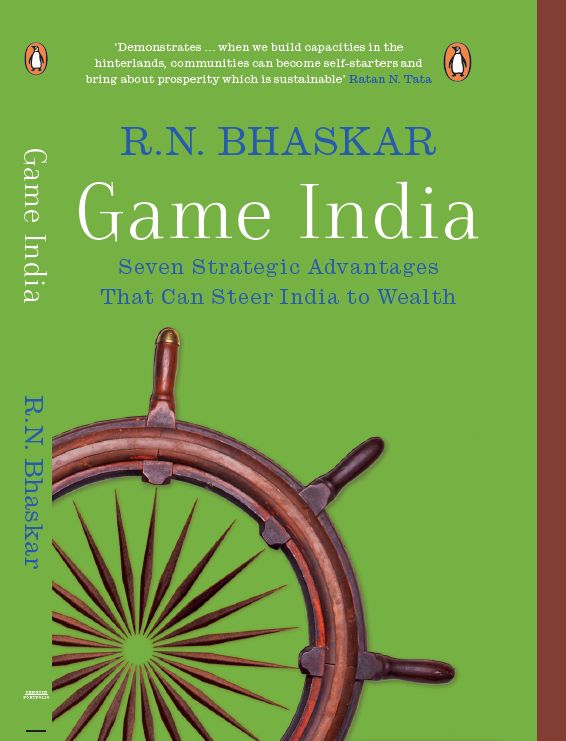 On reading Game India, one realises that part of the reason for India’s unsteady move towards economic rediscovery is its inability to focus on one of its inherent strengths—its people Deepak Parekh, chairman HDFC Ltd puts it quite succinctly on the jacket of the book. “Books can be critical. They can be inspirational. Seldom both. RN Bhaskar’s Game India-Seven Strategic Advantages That Can Steer India to Wealth traverses both the worlds.”

With endorsements from Ratan Tata, Gautam Adani and Mukund Rajan, Game India is nothing if not ambitious. This may be the author’s first book, but with a journalistic career spanning some 30 years, and with two decades of teaching experience in India and overseas, it is clear that the author knows how to weave a compelling narrative—rich in facts and figures, anecdotes and insights he has access to. He has woven his years of information and learning into the book.

The author reminds us that India and China were historically wealth generators. Somewhere, somehow, both countries registered ignominious declines in fortune, exacerbated to a great degree by colonisation. In the years to come, while China began pursuing its historical strength of money-making more consciously, India, while wishing to be a wealth creator, stumbled.

On reading Game India, one realises that part of the reason for India’s unsteady move towards economic rediscovery is its inability to focus on one of its inherent strengths—its people. And if it has failed to tap into this resource, it is for three reasons.

First, the abject record of successive governments in areas relating to education has crippled a majority of Indians. Second, scant attention has been paid to health.

Third, most leaders have not bothered to strengthen, or even genuinely respect, the judiciary; indeed it wouldn’t be wrong to say that the country’s regard for the rule of law is more in the breach than in the practice of it. A direct offshoot of this is organised crime, often abetted by those close to political leaders. This has further impaired a people. In other words, education, health, judiciary are three strengths that India has failed to harness, and due to this it has barely managed to take full advantage of a thriving population.

India, we learn, enjoys four other strategic advantages. These span milk, solar power, coastlines and riverways, and agriculture. Through rare anecdotes, Bhaskar shows how some incredible visionaries have managed to harness these strengths, even while governments may have turned a blind eye to India’s potential.

A case in point is Verghese Kurien of Amul fame, and the ideas he successfully tested to ensure that milk not only generated wealth for the nation as a whole but also empowered farmers. Sadly, successive governments failed to exploit Kurien’s vision. Instead of ensuring that farmers got at least 50 percent of the market price for their produce, governments allowed middlemen to give them only 10 percent.

Similarly, instead of promoting warehousing development (under the Warehousing Development Regulations Act), governments chose to allow the Food Corporation of India (FCI) to promote merely rice and wheat procurement. The book highlights that FCI should in reality be purchasing the wheat and rice it needs from warehouses which have auditors and assayers and which are meant to be linked to banks and commodity markets.

Even while telling us in no uncertain terms where India has erred, and detailing the many sins of omission that have hurt the economy, Game India speaks of how the nation could actually wipe out its current account deficit and become foreign exchange surplus. For instance, a recommendation is to look at converting waste to energy more aggressively, and developing decentralised clusters for power and methane generation.

With over several tables and cross references, Game India‘s facts and figures present a clear roadmap to wealth generation. Anecdotes and stories—some covering the lives of businessmen, some chronicled by India’s greatest minds, and several drawn from the interviews the author has taken during his long career makes the book an interesting read.

http://www.dnaindia.com/lifestyle/review-book-review-dealing-with-china-2090743  Dealing with China Author: Henry M. Paulson Jr. Publisher: Headline 406 pages Price: 389 The jacket on the book says it all: "Dealing with China takes the reader behind...