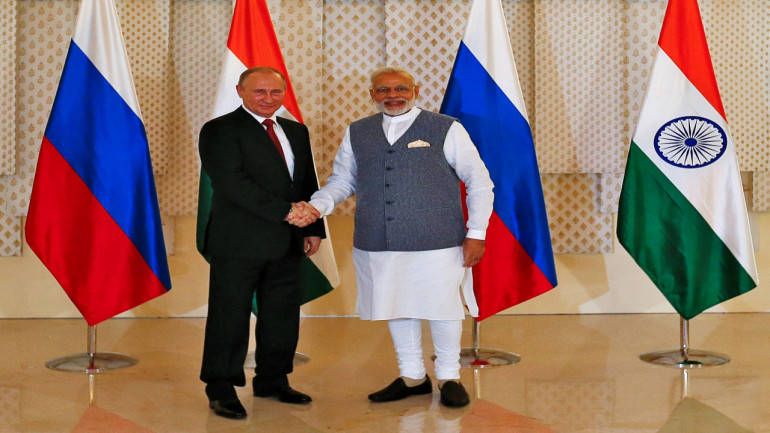 The India Russia tango becomes even more vibrant than ever before

India Russia business relations have already crossed $30 billion a year and are slated to cross $50 billion by 2025.

There was near unanimity on this statement as both India and Russia met at a public forum organised by the Confederation of India Industry in Mumbai on 21 February, 2019.  Business relationships accelerated during the last four years. Two-way investment has already reached US$30 billion — almost 7 years earlier than envisaged.

C R Chaudhary, minister of state for commerce & industry, government of India, stated that his ministry had now revised its target to $50 billion for 2025. The event  — the Russia-India Forum on interaction between Small and the Medium Enterprises — had among its organisers the DPIIT and the ministry of commerce & industry on the Indian side, and the ministry of industry & trade  and the Russian export centre on the Russian side.

In some ways this was expected.  Since May 2009, this author has been talking about the inevitability of India, China and Russia working together causing the centre of gravity of world commerce to shift to the East (http://www.asiaconverge.com/2009/03/will-india-china-russia-dance-togetherincreasing-water-needs-will-china-dehydrate-india/).

Take a look at the chart alongside.  What appears to be driving this confluence among the three countries are population, water and a (not-so-apparent) common destiny.

Watch how China has the least water as a percentage of its land mass, from among the countries surveyed. Typically, as nations industrialise, the share of water used by agriculture begins diminishing – driven by efficiencies and by the growing importance assumed by industry. Obviously, as China began industrialising, its planners realised that they would be short of water.

That could be one reason why India-China border cries became shrill. India feared that China would draw away the waters of River Brahmaputra.  Then by 2004, when studies on water flow were conducted, it was found that even though two-thirds of the Brahmaputra flowed in China (it is called Yarlung there), that territory accounted for just 20% of the river’s waters. Almost 60% of the water came from Arunachal Pradesh.  It might be coincidental but cries over Arunachal Pradesh became shriller thereafter. But these cries got muted by 2013 for three reasons.

First, China itself began to realise the strategic significance of India as a big market. Second, China had already discovered that falling solar prices could allow it to get fresh water through the desalination route. A third reason was also at work.  Just as this author had predicted in 2009, China had begun building a canal to draw water from Russia, which is the world’s largest reservoir of fresh water.   Just look at the table.  Russia has 13% of its land mass (which is already formidably large) under water. The inevitability of water being sourced from Russia was obvious to any student of geopolitics.

In some way, the US itself allowed Russia and China to come closer – they were sworn antagonists once. When the US tried to wean the EU countries away from Russian gas –in the wake of the Ukraine crisis – Russia did the next best thing.  It negotiated a deal with China to build a gas pipeline at very competitive prices.  China was thrilled.  Hitherto much of its energy came from the Middle East, through Malacca Straits, and passing by Korea, and Japan.  These were already encircled by the US Navy and military establishment (see John Pilger’s documentary:The Coming War on China).  Its need to find another route was urgent (which is another reason why it needs Pakistan). Now, water too becomes a critical supply from Russia.

Look at Russia. It has the largest land mass.  It has the world’s largest reserves of gold and oil & gas.  It is believed to have abundant quantities of rare earths and minerals needed for the new information age.

But its population density is among the lowest in the world. It does not have the people to exploit its national resources. China could have helped. but, as Chanakya of Arthashastra fame remarked, the next door neighbour may be a friend, but he can also be your worst enemy.  Too many Chinese coming into Russia could turn squatters overnight.

Russia therefore needs India.  Negotiations are already underway to work out ways in which Indians could help Russia exploit its natural resources. The partnerships between OVL (ONGC’s subsidiary) with Russia is a major step. The plan to rope in Tata Power to exploit its coal mines in Eastern Russia , and to build both a railway line and a port there is another  (https://www.moneycontrol.com/news/business/economy/opinion-russia-could-be-the-next-big-market-for-indian-labour-as-low-oil-prices-depress-the-gulf-3263601.html) .  Expect more such steps.

Take the third area of cooperation.  In the aftermath of the tensions between the US and China, the latter will need India more desperately than before for making its 5G telecommunication solutions the global standard.  This is one area where the rest of the world has been left far behind, and charges of security risk may not entirely be true (https://www.thehindubusinessline.com/markets/many-disagreements-and-conflicts-stirring-the-global-pot/article26342138.ece). If India and China adopt this technology, the latter’s 5G automatically  becomes the new global standard.

But when it comes to defence, China is unlikely to get the latest technology from Russia – it would not like to further strengthen its neighbour.  That could partly explain why Russia is willing to provide its best and latest technologies to India, and not to China.

Expect many more such instances of confluence among the three countries.  Take them together, and you have a further strengthening of Russia-India ties.  The $30 billion is just for starters.  It could swell phenomenally, as Russia remains one of the closest defence allies for India.  India needs Russia — it is one of the very few countries (the US isn’t included) which has engaged in a continuing transfer of defence technology to India.

Additional synergies are now being discovered. For instance, as Denis Manturov, minister of industry & trade, Russian Federation said, the contribution of SME sector in Russia is estimated at 20-25 percent. “SMEs are the foundation of the economy of the modern economy. We have kept a goal to have 40 percent of our GDP contribution from the SME sector and believe that the India- Russia collaboration will play a major role in the same.”  Sectors like information technology, healthcare, biotech and waste management are areas of interest to both countries. “Russia aims to increase its waste treatment potential from the present 6 percent to 60 percent by the year 2024. India can collaborate with us to help us achieve this goal and implement it there as well,” added the minister.

Ningbo Port in China grew despite the prevailing economic slump

https://www.freepressjournal.in/business/ningbo-port-in-china-grew-despite-the-prevailing-economic-slump Ningbo becomes the world's largest port Jescilia K and RN Bhaskar 3 December 2019 Ningbo/China: There is a constant talk about the adverse effects of the US-China...