Home Analysis Even the IIP suggests that India has a painful six months ahead,... 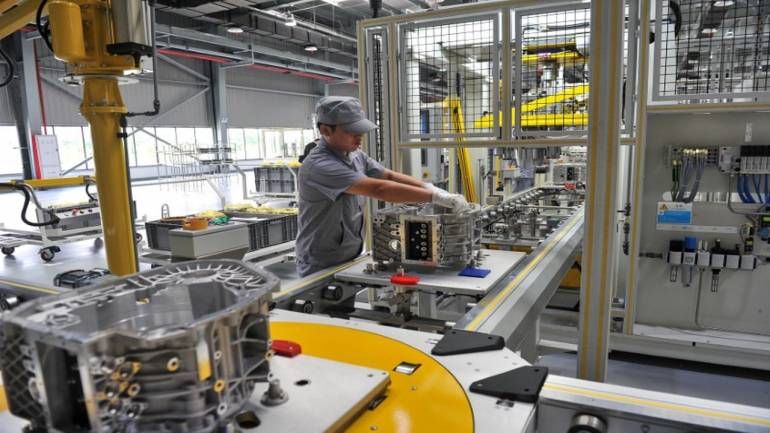 The IIP points to economic slowdown

The Index of Industrial Production (IIP) numbers finally confirmed a pattern that many said was likely to emerge.  But the picture could get darker in the coming six months.

There is also the realisation that the first 6-12 months after general elections are those when there is little money to be spent. Combine the IIP numbers and the past trend in government spending, and the coming pain can well be imagined (https://www.moneycontrol.com/news/business/economy/opinion-brace-for-economic-slowdown-after-2019-lok-sabha-polls-3289271.html). But first to the IIP numbers.  Industrial output slumped to its lowest in almost two years.  The slippage was for the third consecutive quarter.  Instead of mere slowing down of growth rates, IIP growth moved into the negative territory (see chart alongside). Industrial output contracted by (-) 0.1% in Mar’19, much lower than the 5.3% growth witnessed in the corresponding period last year.  This was a contradiction of views held by most economists a year ago.

As a CARE Ratings report put it, “The cumulative IIP growth during FY19 was 3.6%, lower than the 4.4% growth in the comparable period last year.”

It is only when one goes to the components that make up the IIP, that one gets a better understanding of the body-blows the Indian economy has received (see chart on components of IIP).

The sectors that pulled down the IIP were manufacturing (-0.4), capital goods (-8.7%), intermediate goods (-2.5%) and consumption goods (-5.1%). Subdued activity in the manufacturing sector weighed on overall industrial production.

The biggest decline was in capital goods, which does not augur well for future job formation.  Capital goods add to manufacturing capabilities, and is therefore a reasonably good indicator of fresh job formation potential in the country.  When this number declines, it points to a shrinkage in industrial activity, and hence to job formation.  That is the biggest dark cloud on threatening to loom overhead. The need for job formation is crucially significant.

The other big dark cloud that looms ahead is the one relating to consumer goods.  This points to lower purchasing by consumers.  This could be either because incomes do not justify a larger spend.  It could on account of loss of jobs, or a cut in wages.  But then it could also point to households holding on to their money because they see difficult times ahead.  This too does not augur well for business and consumer confidence in the economy.

Of course, one positive part about the IIP figures is that the growth in the infra/construction sector was 6.4% in March 2019 over the high base of 9.1% in the corresponding period last year. But infrastructure helps only if industrial good can travel on them.  The latter needs focussed attention now.

Electricity does not appear to be a dark cloud.  But watch the numbers a bit more closely.  True it went up by 2.2%.  But then look at the growth in March 2018.  It was 6% then.  What is surprising is that this low growth took place when all stops were opened to ensure that every remote household had access to electricity – a good way to please voters (JM Financial report on Rural Safari of 12 April 2018).  Power consumption should have grown more smartly – especially in the months prior to elections.  That they grew by just 2.2% is certainly a bit worrying.

Also do remember that several states will not be able to pay for coal or for power from NTPC thanks to the huge debts they have piled onto themselves on account of unrealised revenues for power supplies (https://www.moneycontrol.com/news/news/business/economy/opinion-why-discom-losses-are-continuing-to-hurt-despite-modi-govts-uday-scheme-2974191.html). Some of the loss making states identified by a CARE Ratings survey titled Power-Sector – Year end 2019, dated March 29, 2019 are “J&K, UP, MP, Bihar and Rajasthan [which] continue to have AT&C losses over 25%”.  These could be among the first casualties in the first six months post elections.

With power supply to some states getting affected, expect industrial output to take a further hit. Unless, of course, solar rooftop policies are allowed to kick in and take up the slack.  Add to this the woes of slowing exports and rising imports, and you have a worsening industrial climate and an even more frightening fiscal scenario.  Then juxtapose this to the worsening dispute redressal climate which has frightened away many investors, and the worries could become migraines (https://www.moneycontrol.com/news/business/opinion-efficient-dispute-redressal-system-a-must-to-boost-fdi-3943071.html).

Just three solutions appear to be ways out of this quagmire in the short run.

First, stanch the electricity losses by switching to rooftop solar (https://www.moneycontrol.com/news/business/economy/a-trade-crisis-looms-for-india-and-how-the-sun-and-waste-can-prevent-it-3719921.html).  Tripura has already shown the way (http://www.asiaconverge.com/2019/03/biplab-kumar-deb-has-big-plans-for-tripura/ ).  Other states may have to follow suit.

Focus on affordable housing, because that too uses domestic material and is less import dependent, and also creates jobs.  It also gives people a dwelling that contributes to greater dignity (https://www.moneycontrol.com/news/business/between-smiles-and-sorrows-world-bank-forecasts-india-gdp-rise-but-raises-unemployment-concerns-2558785.html).

Third, a focus on methanation might offer a solution (https://www.moneycontrol.com/news/business/economy/comment-the-spinoff-from-swachh-bharat-wealth-from-waste-could-be-big-sht-2556797.html), but it will need greater planning than has been possible till now.

All the three translate into jobs, wealth generation, and a reduction in subsidies.

As the Care Ratings review says, “The growth in industrial output is unlikely to pick up in the first few months of FY20 given the increased likelihood of lower investment activity amid uncertainties surrounding the general elections.”

It remains to be seen if the new government can focus on the economy more carefully than it has during the past few years.

RERA: Consumer is the king in UTs, not really so in...