Home Analysis Russia and India have begun to tango; here is why PM Modi’s... 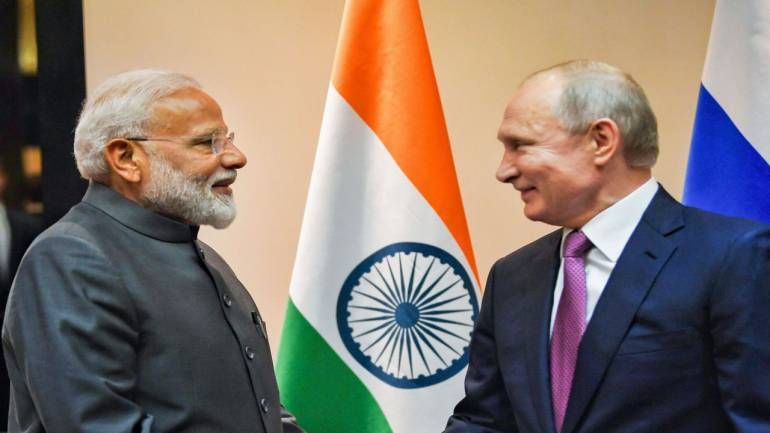 Russia and India have begun to tango

Last week, all news wires were full of developments on the India-Russia front. There was information that India and Russia had tied up to activate a maritime route between Chennai and Vladivostok (https://www.news18.com/news/india/india-russia-sign-pact-to-open-maritime-route-between-chennai-and-vladivostok-2297059.html).  The visit was extremely significant in many ways,  It could herald a surge in India-Russian joint ventures both within India, but more within Russia.

But the Chennai-Vladivostok announcement was only the tip of the iceberg.  By the end of Modi’s visit to this decades old friend, India and Russia had signed 25 agreements (https://www.indiatoday.in/india/story/pm-narendra-modi-russia-visit-vladivostok-vladimir-putin-live-updates-1595178-2019-09-04).  PM Modi took a tour of the Zvezda ship-building complex on the first day of his two-day visit to Russia.At Vladivostok, he was the chief guest of the 5th Eastern Economic Forum. He also participated in the 20th India-Russia Annual Summit and held bilateral talks with President Vladimir Putin

On the eve of his departure to Vladivostok, PM Modi said his visit to the far-east region of Russia was the first by any Indian prime minister and he spoke of the desire of India and Russia to diversify and further strengthen the bonds of robust bilateral relations. Moreover, in  an attempt to underscore the seriousness of the engagement, the prime minister talked up the $1 billion Indian credit line to provinces in the Russian Far East.

Even before the prime minister visited Russia, the ground had been set by Commerce Minister Piyush Goyal (https://dipp.gov.in/sites/default/files/Press_Release_edited_13_08_2019.pdf). He led a 125 member delegation comprising chief ministers of Goa, Gujarat, Haryana and Uttar Pradesh, an official from Assam and representatives from business stakeholders.  They interacted with Russian counterparts on opportunities in the mining and processing of diamond and other rare metals, railways, agriculture, fisheries and food processing, oil and gas, forestry and timber, coal and power, ceramics, tourism, ship building, technical education, healthcare, and pharma sectors and Ayurveda.

The meetings were of immense significance, because as the PIB points out “Russia ranks first in the world for oil and natural gas production, exports of steel, primary aluminum and nitrogen fertilizers. Russia is also the largest in terms of reserves of tin, zinc, titanium, niobium, nickel, iron ore, drinking water, natural gas, wood, diamonds and silver.”

This was the second time PM Modi had been hosted by President Vladimir Putin – the earlier one being at the 22nd ‘International Economic Forum’ in St. Petersburg in May 2018.  And even prior to Goyal’s visit, the former external affairs minister, the late Sushma Swaraj had a meeting in September 2017 with Russian Foreign Minister Sergey Lavrov who described Indo-Russian friendship “as strong as stone”.

But the strategic significance of Russia goes even deeper.  The first is at the defence and military level.  Russia has remained (along with Israel and France) the most reliable defence partner for India.  Russia has even been willing to share technology in respect of its latest weaponry with India (Brahmos being an excellent example).  Relations with Russia have not been as turbulent as with the US (which does not really transfer technology), nor as unreliable as the deals with the UK (remember the Westland Helicopter deal?).

There is a more strategic edge to ties between Russia and India. This significance was first analyses by this author as early as ibn 2009 when both geography and economic data confirmed the urgent need for both countries to cooperate (https://www.livemint.com/Companies/wDLWbd3OWUGppEzYYC0yYO/The-Capitalist–With-increasing-water-needs-will-China-deh.html).  Take a look at the chart alongside

Two figures are crucially important.  First look at the amount of water resources countries enjoy.  India is blessed with the largest water resources in Asia.  China, in sharp contrast, has among the lowest water reserves (https://www.moneycontrol.com/news/world/water-usage-lessons-india-should-learn-from-china-4026441.html).  Russia has probably the world’s largest reserves of fresh-water both in percentage terms and in quantum.  The former is important because Russia has a land mass that is three times the size of USA or China, and nine times that of India.  Thus when percentages are taken as part of land mass, the actual quantities are mind-boggling.

Take a second number – density of people.  Russia has among the lowest densities of people.

Thus Russia has a big problem on its hands.  It has the world’s largest reserves of gold, oil and gas, tin, zinc, titanium, niobium, nickel, iron ore, wood, diamonds and silver.  It has a huge land mass. But it does not have people who could help it exploit all these minerals.  Nor does it have enough capital, thanks to sanctions and embargoes that have been imposed on it by the West. So what does Russia do?

To generate more money, it needs people.  There are two countries that can provide it with people in abundance – China and India.  But China is a next-door-neighbour.  Anyone working in Russia from China can easily become a squatter.  That could be a headache Russia would like to avoid.  India, however, is not a next-door-neighbour and would be willing to enter into commercial arrangements which could allow the workforce to return to home base once the work is done.  The danger of demographic tinkering by Indians in Russia could thus be avoided.

This way India gets a first rate reliable partner in defence; China gets from Russia its water, natural gas, and limited amounts of defence technology (not too much because a well-armed next-door-neighbour is not always a comfortable idea); Russia gets its manpower (even capital) from India, and India finds employment for its people in some sort of revenue sharing deal. China needs India’s markets, and India will need investments from China. At the same time India gets a powerful ally in Russia just in case China gets closer to Pakistan (China needs Pakistan because it gets critically-vital access to the Arabian Sea in its deal with that country). The synergies between India, Russia and China are amazing.

Where does that leave India and the US?  That will always be a kind of tightrope walking.  India needs the US for its capital, for its ability to rein in Pakistan and for its export markets (the US remains a large market for India (for both products and services).  The US-Israel alliance is very strong, and some of Israel’s weapon exports to India could get adversely affected should ties between India and the US begin to sour. And the US needs India for the same reason China does.  It is the largest free-market in the world.  And growing too.

Already, Russia is negotiating with Tata Power to build a railways line and exploit its coal mines in Eastern Russia (http://www.asiaconverge.com/2017/04/india-russia-yo-years-of-friendship/) .  Other countries are also following suit.  Russia’s largest bank (the equivalent of SBI in India) has beun expanding its operations in India (http://www.asiaconverge.com/2017/04/making-sberbank-relevant-to-india/).

Expect more such deals to materialise.  That is why the prime minister was quick to sanction a $1 billion line of credit to Eastern Russia – where much of the unexploited mineral wealth in Russia lies. The Chennai-Vladivostok maritime link will allow India to ship these minerals back home, and also reinforce the rights of both countries in crucial maritime lanes.

That is why PM Modi’s visit to Russia is far more important than many of his other visits.  Expect huge commercial benefits to emanate for both countries soon.

The chimera of affordable housing

https://www.freepressjournal.in/editors-picks/the-chimera-of-affordable-housing/1448875 Is the government serious about affordable housing? RN Bhaskar -- 31 January 2019 Time it was, and what a time it was, it was A time...