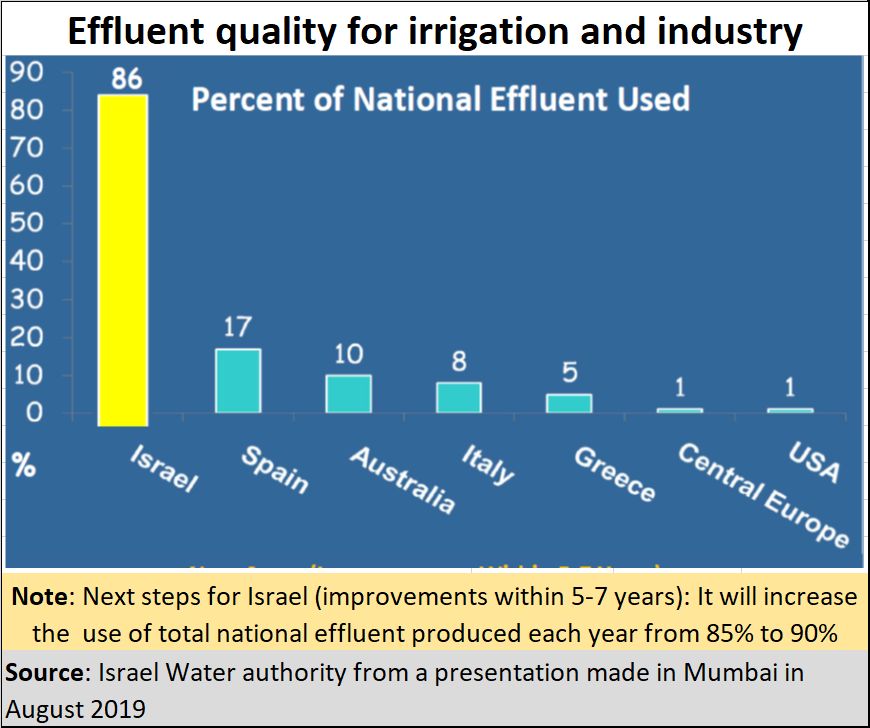 As Israel had little water, it had to remind its people that water was a miracle.

Lately, water has begun to obsess India. However, the sense of urgency has waned because a 19% deficit has eventually turned into a 1% surplus as far as rain is concerned.  That is because India is triggered by crises.  When that phase of panic is over, apathy takes its place. Many have begun to forget the questions that should be asked — how much of that rain was captured, or how much of the rain water actually went into replenishing underground reserves, or how much of the water got contaminated because of the toxins and waste it gathered on the way.

And that is where the visit of Uri Schor, spokesperson for the Israel Water Authority, is timely. He is in India to tell India’s water administrators that the world’s biggest water and water technology exhibition – held once in three years — is to be held in Israel from 18 to 21 November this year.  Some of these technologies will be desperately needed in India.

He has also been trying to persuade state (and central) governments to use the tremendous knowhow his country has in this field. There is no denying that Israel has actually changed the way the world looks at water, agriculture and community dwellings.

For instance, nobody thought that the desert and arid area that today comprises Israel would ever become inhabitable, let alone an area which could export vegetable and fruit. Yet, Israel managed to show the world, and even its own people, that managing with little water could be coped with. This is despite the rapid increase in Israel’s population — which by itself means more water consumption – and affluence which spurred demand for more water. Even more surprisingly, total demand for water declined (see chart).

True, agriculture enjoys the biggest share of agriculture.  But it too uses less water per tonne of output. This was thanks to new technologies – micro irrigation was one of them – and better water and waste management.

And it all began because Israel has very little water (see chart on rain water).  As Schor points out, Israel gets less water than even the deserts of India.  He does believe that India is unbelievably fortunate to receive so much of water.  Because Israel had little water, it had to remind its people that water was a miracle, a rare treasure that had to be preserved, nurtured and even created.

Schor talks of how in his country almost 50% of the water is manmade – through waste water treatment and recycling.  Today Israel treats almost 94% of its waste water and recycles around 85%.  It hopes to notch this up to 90% over the next 5-7 years; “Beyond 90$ the costs become too high,” explains Schor. “but today, go to Eilat, our driest of territories which gets almost no water.  You will find lawns, gardens, swimming pools – all signs of decent water availability which can help build a community.”

As Schor explains, “What we do is to maximise the potential of what we get through rainfall, we try to conserve almost every bit of water we get through the rains, and we recycle all water that many countries consider waste.”

Effectively, this means that India has to first put into place rainwater collection systems. Second, it means that India also has to make sure that the water collected does not get contaminated – either because it got mixed with toxins lying on the path of its flow, or because effluents are allowed to pour into these reservoirs.  These are the first steps.  But then comes the more difficult, but crucial part, of plugging leakages.

“The average leakage of water through pipes and canals is estimated at 25% world-wide.  In India it can be as high as 40-60%, explains Schor.  “Some leaks are in pipes that are over ground and accessible; they can be plugged easily.  But there are pipes underground, under cities. So we developed technologies to identify leakages even where pipes cannot be seen.  We even use satellite imagery.  Then we use technologies that can repair leakages from the outside.  We also developed technologies that can seal the leakages from inside pipes, even those which are underground preventing damange to roads and buildings which have been constructed over the pipes. We have measurement systems for water which is underground, and water which is supplied through taps.  We have systems to reduce leakages.  In Israel we have one of the lowest non-revenue water (NRW) — less than 10%.” How dependent is Israel on desalination? According to Schor, “Israel today ensures that more than 50% of the water that is available is man-made water.  This means water that is created by us out of waste water, or through desalination. Since we do not get any rain water, we opt for desalination only to meet the gap between demand  for water  and the rain water plus recycled water.”

He expects his country to continue building desalination plants. Already, Israel’s technologies for desalination allow for the lowest of costs, even lower than 50 cents per cubic metre (around three paise per litre).  “So if we get rain, we reduce the amount of desalined water produced.  If it does not rain, we increase our production of desal water.  All our desalination processes are on a public-private partnership basis and this flexibility of production is built into the contracts.”

Thus, the focus is largely on collection, conservation and treatment and recycling of water.  “Unlike some countries which offer recycled water for drinking as well (there is nothing wrong with that), we give the recycled water for agriculture and for industry.  Our aim is to convert 90% of the waste water into recycled water, after which it gets too expensive. For human consumption, we offer a mix of fresh water from rains, ground water, and desal water.”

The other focus is to reduce water consumption.  And for this, media campaigns are of crucial significance.  Schor explains that while water pricing works, more effective is people’s understanding of how precious water is. “If people are aware about the need to conserve water, there is less resentment, and willing compliance.  That is why we run campaigns which are carefully designed to achieve specific targets.  In this area, we are different from product advertising, which aims at making a potential customer come in and buy the item.  If the product is good, he will buy it again.  The campaign is not required any more.  If the product is bad, no amount of campaigning will make the product work.”

So for Israel micro (or drip) irrigation is not merely meant for farms.  It is for public gardens, grass lawns, even plants grown inside the house. That explains why that country’s total water consumption has declined, even as its population has grown ten-fold since 1948.

https://www.moneycontrol.com/news/india/maharashtras-criminally-reckless-water-management-and-its-industry-unfriendly-moves-3138561.html Reckless water management in Maharashtra borders on criminality Water levels underground have fallen by more than a metre during the past few years. That bodes...