Home Analysis Is anyone listening to Janet Yellen? 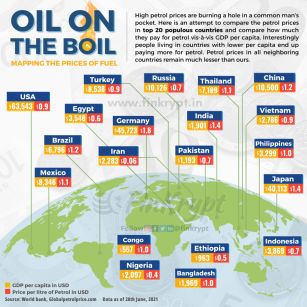 US Debt, Oil Prices, Inflation and other risks

US Treasury Secretary, Janet Yellen, has warned, in this article in Wall Street Journal, that the US would breach its debt ceiling by end of July, if Congress does not act to amend it. In 2019 the US Congress had suspended the debt ceiling, until end July 2021 and, unless this is amended, the US Government will not be able to raise 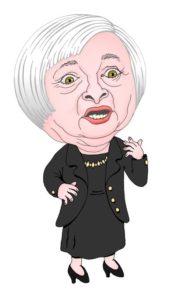 Is anyone listening to Janet Yellen?

The US federal deficit will hit $ 3 trillion in 2021, as the projected revenues of $ 3.8 tr. fall short of projected expenditure of $ 6.8 tr. This is expected to worsen, due to risk factors like higher oil prices (Brent crude is at $ 73, a slight fall after OPEC and UAE announced a truce), higher inflation and the servicing of US debt, which, at $ 23 trillion, is the highest ever. Add to that is the Delta variant of Covid, which is highly transmissible and so can lead to further lockdowns, affecting economic activity.

This means that, if stricter lockdowns do occur, the forecast revenues will fall short. Israel first reported cases of double-vaccinated persons getting infected again, and not there are reports in other countries, including USA and UK. Scientists have  warned Boris Johnson that lifting lockdown restrictions now poses a threat to the world.

So, should the Delta variant prove to be highly contagious, Governments would have to revisit the ‘lives v/s livelihood’ debates and may decide to, again, impose restrictions. Which would mean additional expenditure (and lower revenue) for them, and a need to further raise an already high debt ceiling.

Economists, and stock market observers, are also debating whether the greater risk now is from higher inflation or, on the contrary, from deflation! The Quantitative Easing (QE) programmes, point, logically, to higher inflation. The tsunami of money from QE goes, immediately, into assets. It is easier, and faster, to click a button, to buy assets like stocks, or gold, or crypto, or whatever, than it is to build a factory. So the QE money first goes into creating asset bubbles. When people get around to feeling comfortable enough to raise consumption, it leads to consumer price inflation. Prices of essential items have started going up.

There is, however, a school of thought amongst leading investors, which anticipates deflation! Cathie Woods, founder of Ark Invest, points out that US Tresury yields, which rise on expectation of higher inflation, have, instead settled down, indicating that the debt market expects deflation. Perhaps after an initial  run up in prices.

Hence, if the lockdown is stricter, consumer spending would be negatively affected, and this would dampen inflation. So there are a lot of moving parts here.

It is interesting to see the changing profile of the top 10 US companies, by market cap. Ten years ago, in 2011, Walmart, ($ 182 b. m. cap) was the largest, followed by 3 Oil Exploration companies, Exxon Mobil, Chevron and Conoco Philip.

Ten years later, in 2021, none of them are in the top 10 US companies by m. cap. The largest, now, is Apple (m. cap $ 2,442 b, or 13 times the largest company ten years ago) followed by Microsoft, Amazon, Google and Facebook. So the tech companies and social media companies have overtaken the Energy companies by a wide margin.

In fact the only one in the top ten list in 2011 and in 2021 is Berkshire Hathaway, testimony to the investing skills of Buffett and Munger! The list in 2031 would also be quite different, as new technologies will emerge and propel the early entrants.

Thanks both to rising prices of crude, and the high taxes levied on petro products in India, petrol prices are consistently scoring above 100, performing better than the cricketers in that respect! Here is an interesting chart which compares the petrol price to the average income, across countries.

So, e.g. India’s per capita income is 1,357 times its petrol price. By contrast, USA is 70,603, China is 8,750, and Brazil is 5,663 times. Indian prices are high, thanks to high taxes, and help push up cost of manufacture, of food (agriculture is highly dependent on fossil fuels at the farm, e.g. use of tractors, in storage and in transport) and of logistics. A review of taxes on petro products should be undertaken.

India’s Atmanirbhar (self reliance push) together with its PLI scheme (Production Linked Incentive) has succeeded in attracting FDI into India by companies like Apple, Samsung and others, to make phones, IT and electronic hardware. Last week French company Alstom, manufacturer of commuter and transit trains, began manufacture in India.

This will help India get a transfer of technologies, help get well paid jobs and a more permanent inflow of FX than FII investment.  Now the GOI should focus attention on other bugbears to attracting more FDI (foreign direct investment) including its poor record in dispute resolution and its delay in acceptance and enforcement of global arbitration awards.

Investors should follow developments on raising of US debt ceiling, on global inflation and on movement of oil prices.

But, going by the past several weeks, the market is expected to be….you guessed it……flat!

Marathwada’s drought: Region is parched, impoverished and desperate, but it’s a...

http://www.firstpost.com/india/marathwada-drought-the-region-is-parched-impoverished-and-desperate-the-exploiters-turned-into-the-exploited-2715116.html Maharashtra is a state full of contradictions. It is a state rife with more inequality than most. And it is a state where each territory tries...