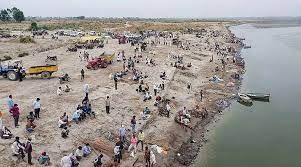 RN Bhaskar  (the second part of this series can be found at https://asiaconverge.com/2021/07/hindi-belt-ii-crimes-against-children-and-against-humanity/)

Prime ministers should be careful about what they utter.  They are heads of state. Endorsing a rotten practice can cause immense harm—both to the image of the country’s principal executive, and to the socio-economic culture in that nation. It is one thing, equally reprehensible, that Niti Aayog chooses to become the principal chronicler of UP and celebrates it.  But it is far more serious when the prime minister does this. 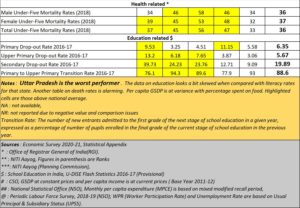 The manner in which UP handled Covid has already been written about in these columns (https://asiaconverge.com/2021/04/little-governance-till-uttar-pradesh-is-tamed/ and https://asiaconverge.com/2021/04/covid-19-killing-fields-in-india/). If its covid numbers were low, one reason was that diagnostic centres were asked not to test patients, so that the actual count could not be revealed (https://twitter.com/andymukherjee70/status/1383233764235517954?s=20). It is the same story with much of what is wrong.  People are asked not to complain.  If you protest too much, you could land up behind bars, or worse.

The pictures of bodies floating down the Ganges and being discovered in sand banks have provided shocking testimony to the utter collapse of the state machinery.  Arguments that people normally prefer to throw bodies in rivers – because they consider this auspicious — also do not wash. It was to prevent this type of pollution that the Namami Gange project was introduced.  So, were the Rs.8,000 crore spent on account of Namami Gange meant for some other cause (https://asiaconverge.com/2020/08/government-plunder-productive-states-in-india/)?  And why has the National Green Tribunal (NGT) been silent about this desecration of a river?

UP also ranks among the top three states which do the least medical certification of deaths (https://asiaconverge.com/2021/06/missing-dead-2-who-is-responsible/). Only 6.3% of registered deaths are medically certified.  Which means that nobody knows the causes of death for the remaining 93.7%. Worse, it could have a lot of missing dead people who are not even registered as being dead, if one goes by the death rates recorded by the Government’s Economic Survey 2020-21 (see chart on Human Development indicators).  Whether the Election Commission has taken this into account and cleaned up the electoral registers is not yet known.

What is even more horrifying was the state government’s eagerness to allow the Kanwar procession in celebration of Lord Shiva during the pandemic season.  If there is any decision that is close to being called a willingness to allow mass murder, it would be this intent.  Mercifully, the Supreme Court has stepped in and has – without mincing words – called this intent reprehensible.

It is also tragic that the National Commission for Human Rights (NCHR) should make a song and dance about a few deaths in West Bengal (https://www.business-standard.com/article/current-affairs/nhrc-report-on-bengal-post-poll-violence-recommends-cbi-probe-121071500848_1.html), even while overlooking thousands of deaths caused by state irresponsibility. 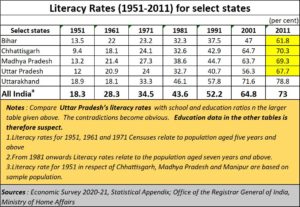 Then there are numbers that are inexplicable.  They contradict other numbers.  For instance, in the chart, UP has extremely low drop-out percentages at upper primary and high education levels.  Were the numbers true, they would have translated into higher literacy levels.  But at 68% the state is below the national average of 73%. This is strange. Especially because its dropout percentages are lower than national averages.  Something is surely amiss.

Take another indicator.  Per capita income is growing at rates higher than the national average. This is even while its GSDP growth is lower than the national average.  This could mean two things.  First, that population has already shrunk so dramatically, that per capita growth figures have swelled.  Or it could mean that some figures have been fudged.  Something is missing, and it will be interesting to know what.

Take a third indicator. Rural share of food expenditure for 2009-10 (latest figures available in the 2020-21 Economic Survey) shows up as 58% which is much higher than the national average of 41%.  This is higher than 56% for Madhya Pradesh, though lower than 65% for Bihar.  The share of expenditure on food is higher when people are poorer, and it declines when people begin climbing up the economic ladder. Therefore, clearly, UP’s tale of economic prosperity does become a bit difficult to swallow. 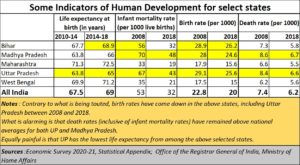 Yes, UP does fare a little better when it comes to the urban share of food expenditure, which stands at 46%, lower than the national average of 49%.  But UP is largely a rural state. So, it is the rural number that should matter more.

None of these are issues to be proud about.  They all point to the absence of medicare and governance.  If medical facilities are deficient, how could Covid vaccinations be “unprecedented” and “commendable”?

And that takes us to one more number.  Watch the birth rate.  Yes, it is higher at 25.6 compared to the national average of 20.  But also observe how it has fallen from 29 in 2008 – that too without any ban on the number of children per family.

The truth is that as life expectancy improves, infant mortality declines, and as people become more prosperous, birth rates automatically decline.  High birth rates have much to do with lack of governance, not because of the absence of birth control laws. If only the government had provided for better education.  If it had reduced infant mortality and childbirth mortality, the need to have more children would have been less acute.  If only farmers had been allowed to earn more, then prosperity would have caused birth rates to decline, as has been the case in many other parts of the country.

The child-birth laws are obnoxious because they can be applied selectively. Or they can be used to polarise communities.  That is the last thing India needs when it is being ravaged by a severe economic downturn.

In fact, UP is a classic example of what can go wrong in a country.  It has impoverished its people – largely rural folk.  Ironically, this is not poverty born out of a lack of opportunity, or the absence of resources.  It is triggered by a desire to exploit. 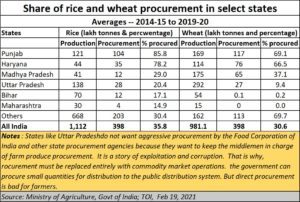 The exploiters, usually, are people who either share the booty with their political masters, or who act as middlemen-cum-musclemen to control large votebanks in return for protection.  In effect, it works almost in the same way as a mafia does – it seeks votes in exchange for protection and for ensuring that the crop gets sold.  The last is crucially important, because without that sale, rural folk would not even be able to live.

Otherwise, UP is blessed – with lots of sunshine, an abundance of land and people, and lots of water.  It is the country’s largest producer of at least three agricultural items – milk, sugarcane, and horticulture.  Its proximity to large consumption centres – cities that dot the neighbourhood — ought to leave the farmers with huge amounts of money.  But that does not happen.

So, while rice and wheat enjoy MSP guarantees, milk, sugarcane, and horticulture do not.  Instead, despite being the country’s largest producer of these three, UP has chosen to expose farmers to the predatory practices of middlemen (https://asiaconverge.com/2021/05/agenda-1-dont-meddle-with-the-dairy-sector/).

In any case, UP does not like support prices, if one goes purely by numbers.  Just look at the way procurement takes place. Punjab and Haryana — where farmers are not exploited — ensure that much of their grain is procured by government agencies – the Food Corporation of India (FCI) or state procurement agencies.

States like UP and Bihar, who have farmers who are quite poor compared to their counterparts in Punjab and Haryana, don’t even lobby with the government to ensure that all their wheat and rice gets procured.  With UP, only 20% of its rice gets procured (you can be sure that it benefits only well-connected farmers).  Almost 80% of the farmers must depend on middlemen.  When it comes to wheat, barely 9% gets procured.  Around 91% of the production (mostly by small farmers) is picked up by middlemen.

True, procurement would mean higher prices for farmers than that paid by middlemen.  But the political system in these states prefers to keep the middleman happy.  After all, the entire political machinery is indirectly managed by them.

That is why, if the prime minister wants farm laws, he should have first abolished all procurement (https://www.moneylife.in/article/the-fight-is-no-longer-between-the-good-and-the-bad-but-between-the-corrupt-and-the-rapacious/62370.html).

Instead, the government should procure all crops from commodity markets at the recommended support prices.  That will compel middlemen to procure the grain they require at the same support price. Else farmers would sell through commodity exchanges,

It would change farm equations entirely.  But farmer laws are so designed that the role of the FCI is allowed to remain intact.  And the middlemen in politically sensitive states like UP and Bihar (which account for most of the legislative seats) are thus protected.

In fact, the central government in collusion with state governments has kept farmers poor in much of the Hindi belt.  If the farmers get more money, they could trigger consumer demand, which could make the Indian economy bounce back to health.

That could change the entire country.

That is also the reason why the prime minister’s words extolling UP are unfortunate. They could even be counterproductive.  India needs a more vibrant UP, prosperous, and sensitive to law and order.

But that is the second problem with UP. The degradation of human values and the scant concern for human liberty is what the next part of this article will discuss. 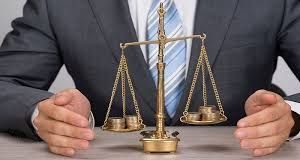 https://www.freepressjournal.in/analysis/can-india-hope-for-speedier-justice Judiciary - Part IV: The curse of judicial delays (All other articles in the Judiciary series can be found at http://www.asiaconverge.com/2021/03/the-judiciary-series/) RN Bhaskar India has a way...