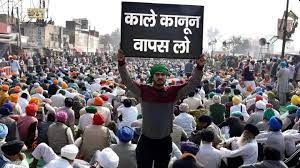 The farmers called for a Bharat Bandh on 27 September 2021.  It was largely successful.  What is amazing is that despite the brute force with which the government tried to break the farmer protests, the farmers remain defiant.  They want the three farm laws repealed (https://www.moneylife.in/article/the-fight-is-no-longer-between-the-good-and-the-bad-but-between-the-corrupt-and-the-rapacious/62370.html) .

The Modi-government cussedly refuses to do so.  The Supreme Court has stepped in and has stayed the operation of the three laws.  In all probability, the laws will be struck down by the Supreme Court, or they will be repealed just before the next national elections.

Too much is at stake for the farmers.

The trouble is that the farmers themselves do not know why the laws must be repealed.  In fact, many of the farmer leaders may not like this article – and most certainly politicians across party lines too.  The fact is that most farmers have been used and abused.

Despite platitudes, most politicians do not want small farmers to become financially independent. That would reduce their ability entice farmers with doles.

The first two tables tell the story of how little farmers earn.  The first table gives farmer incomes state wise.  The most privileged are the politically well connected, and cossetted, states of Punjab and Haryana.  The most progressive are cash crop growers like those who grow spices and rubber (and even sugarcane, but more on this later).  That can explain (largely) why farmers in Punjab, Haryana and Kerala remain richer than farmers elsewhere.

States like Maharashtra and Karnataka have encouraged sugarcane growers, who get better returns than other farmers, In Maharashtra, however, even though there is less water, governments have permitted sugarcane acreage to increase by over 125% between 1990 and 2020. So other crops were denied water, and irrigation.

But Uttar Pradesh has seen the worst exploitation of farmers. They are not allowed to form cooperatives – either for milk or for sugarcane.  For milk, the farmer gets around Rs.10 per litre less than his counterparts in other states.  This is despite UP being the largest milk producer in the country.  Last week, the state government, possibly with an eye on state elections, agreed to give the farmers Rs.25 per quintal more for the sugarcane growth.  Even this is a pittance.  The political setup in UP prefers keeping the farmers on doles, so that their votes could be ‘captured’.

The second chart is about how little farmers earn. As this table from Nabard shows, the farmer earns quite a bit working as a wage-labourer.  That is more remunerative than cultivating his own field. Wage labour contributed to almost half the total household income. 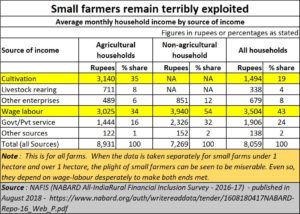 Watch the earning from livestock.  Even a single cow can generate profit (all income less expenses) of Rs.100 daily for 300 days a year, provided it is given decent cattle feed.  That should have generated an income of Rs.2500-3000 per month.  But, as said earlier, UP’s farmers get among the lowest prices for milk (https://www.moneylife.in/article/who-is-responsible-for-keeping-farmers-in-bihar-and-uttar-pradesh-poor/64639.html).

One thing becomes quite clear when you look at the figures – which are the average annual figures for the period between 2014-15 to 2019-20. 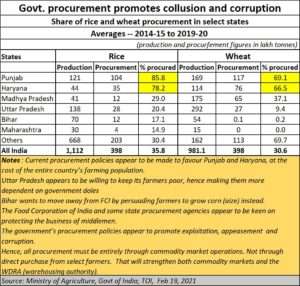 Farmers in Punjab could ensure that over 85% of its rice and 69% of its wheat got picked up by government procurement agencies.  Similarly, farmers in Haryana saw 78% of their rice and 67% of their wheat being procured.

Since procurement prices of rice and wheat have gone up year after year without fail, these farmers faced little market price risk.  In fact, the prices in India are higher than international prices. So, farmers in these two states, who are extremely well-aligned politically, have little to worry about – free water, subsidised electricity, remunerative and guaranteed prices.  Marginal farmers in Punjab and Haryana may get left out.  But overall, the farmers there are a pampered lot.

Many farmers in these states are known to cheat despite these benefits.  They will persuade the procurement officers to purchase their crop as A grade grain, even if it is B or C grade.  The officials usually do so, after their palms have been greased.

That is one reason why, FCI allows grain to rot outside the warehouses so that audit of the grain procured is never possible.

Too little storage, too much procurement

There is another problem, which procurement officials see as an advantage.  There is little storage capacity, and too much of procurement.

Consider the two tables that follow.  One is the estimated storage capacity in India. Unfortunately, the government has not given out the latest figures, and the figures in the chart have been culled largely from data collated in 2011.

The next chart is about WDRA approved storage – possibly incremental storage – as of 2011. The WDRA (the Warehousing Development Regulations Act) was promulgated in 2010 (https://asiaconverge.com/2017/08/is-wdra-a-functioning-organisation/). 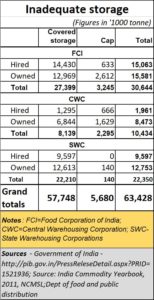 The three laws enacted by the government do not talk about improving warehousing – critical for preservation of farm crops – whether they are grains, or vegetables and fruit.  All crops require warehouses – and different kinds of crops need different temperature and humidity controls for them.  In fact, the government has kept silent about warehouses, and has not breathed a word about strengthening the WDRA, which is in charge of ensuring that every farmer’s produce is picked up. 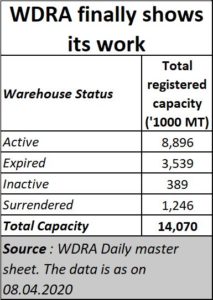 The idea was to have a warehouse without 5 or 10 km from almost every farm.  This way, the farmer could deposit his produce in the designated warehouse – depending on the type of crop he grows.  At times the farmer would grow the crop which could be picked up by the warehouse in his neighbourhood.

The warehouse evaluates the crop, grades it, and gives the farmer a dematerialized warehouse receipt.  The farmer takes this receipt to the bank and can encash it based on prices ruling on commodity exchanges.

The WDRA was meant to break the need for mandis to be the sellers, but saw their role primarily as aggregators.  It decentralised the farming business into professional roles, reducing the need for political intermediaries.

The three farm bills do not touch that.

Now compare these numbers with the storage capacity.

So, you have grain production which stands at 200 million tonnes and storage at just 80 million tonnes of just rice and wheat. Procurement (hence guaranteed prices) accounts for only 30-35% of this quantity.  So, 65% of the crop must be sold at distressed prices.  The middleman is well in control. Political favouritism continues as before.  In fact, as production volumes of rice and wheat have increased this year as well, the power of playing favourites becomes more potent.

The government does not dare use market mechanisms to reduce production volumes. It dares not tax water or electricity to wean farmers away from rice and wheat.  It is thus leading farmers up a cliff till there is no going further. This must stop.

In order to make agriculture healthier, it needs to do many things. None of them are addressed by the three farm laws.

These are things that the three laws don’t do.

At present the three laws tinker with agricultural produce in such a manner that state politicians are cut off from milking farmers, but the central government is permitted to reward politically aligned farmers who grow rice and wheat. This allows the centre to make money and dispense favours, yet attempting to emasculate state political parties.  This one-sided approach will just not do.

The three laws must therefore go.

India-China relations need to be given more time and attention

https://www.moneycontrol.com/news/economy/policy/india-china-relations-need-to-be-given-more-time-and-attention-4532101.html India-China relations - lots of potential there, but . . . RN Bhaskar – 14 October, 2019 The Modi-Xi talks in Mahabalipuram are over.  Officially, the...