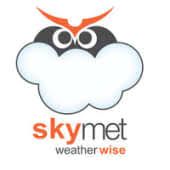 Yogesh Patil of Skymet is a weather man with a vision

Noida-headquartered weather forecasting services Skymet has been exploring new sectors to offer its products and services. While it continues to have a dominant position in the power, media, insurance and agriculture space, it is now looking at future growth coming from sectors such as financial services, construction and so on.

Yogesh Patil, CEO of Skymet, said “Financial services is our top priority at present.” He added, “State Bank of India (SBI), HDFC Bank, ICICI Bank and few cooperative banks have started using our offerings. Going forward, every bank would use a similar kind of tool.”

The tool that Patil is referring to is expected to help financial services mitigate risks arising due to climate change. The tool will provide information such as where the land is located, which crop was sown in the last four seasons, the soil condition of the farm, irrigation status of the farm, yield received every season etc. And this information will be made available to the banks and other financial services at the click of a button and without visiting the farm.

“This will be a rural CIBIL-kind report. This is the latest offering of Skymet and this is the largest revenue churner for the company.” Other than banks, the company expects more and more cooperative banks to avail of this service.

The first bank to avail of this tool was SBI and the pilot was carried out in Madhya Pradesh by linking Skymet’s data with land records. “This led to the bank releasing loans without visiting farms,” stated Patil.

Yet another sector that may evaluate the impact of climate change in their business is the construction sector. Patil revealed today many investors before investing in large real estate projects wish to understand the climate risks and weather of the area or land parcel they are investing in.

In addition, the company is also developing a product to keep a check on air quality and develop a system that will help recognise the pollution hotspots. “This would be more or less like an application that will advise people to avoid a route or an area while travelling or for other activities as pollution levels are high.”

Almost two decades in the business

Founded in 2003 by Jatin Singh, the weather forecasting services has come a long way. From selling weather data in a much more appealing form to providing customised forecasting to sectors based on their needs.

While selling weather data initially, the company saw an opportunity on the forecasting side. “We started developing weather forecasts and capabilities.”

After partnering with media houses, the other level of growth for the company came from the power sector in its initial years. “We got business from four to five power companies as there were limited companies in that sector (the scope of growth was limited). But later the question was how to grow beyond that.”

In 2007, Skymet entered the agriculture space. “It was during the same time Nokia had launched ‘Nokia Asha’. This handset had an option to access information on commodity prices, agriculture products, weather in the local language and so on. So, they asked us to provide weather information for that application. So, we started focusing on agriculture.” It was around the same time, Reuters Market Light (now RML AgTech) entered the rural economy. With both — Nokia and Reuters Market Light — in the same line of business, Skymet was quick to realise the potential of the agricultural economy. “As agriculture was huge and spread across the country, it was not feasible for us to expand (due to lack of financial resources). A lot of ground observations points were needed in India then.”

Post fundraising, the company was able to add many observations points. Today, Skymet has around 6,500 observation points. “These points have been stable for the last six-seven years,” added Patil.

The company realised it needs weather data for two things to improve its forecast and also sell the actual weather observation. Elaborating further, Patil said, “In the case of

improving the weather forecast, we had to invest without recognising the buyers for the services. While looking for options (read clients), we found that India has a huge crop insurance market. Despite the weather playing a significant role in this, there was no focus on weather. We started creating awareness about the real-time data transmission on the weather; and how this could be plugged in and can be used for speedy settlement of claims.”

Post that, the company looked at new products. It started using satellite information combined with weather data. “This allowed us to provide better information for the speedy settlement of claims,” Patil stated.

At present, Skymet is mixing its own ground observation combined with earth observation. “We call this hybrid data point,” Patil added. “In Bangladesh, settlement is taking place on observations based on hybrid data set.”

By 2021, Skymet had almost a decade of data sets on agriculture, which include 22 million farms, digitalised data sets and so on.

In the last few years, the company has been growing at 20 per cent year on year. While in 2020, the company saw a dip in revenue due to COVID; this year things have improved.

In the case of employment generation, the company has trained graduates in the villages to collect ground reports and surveys. “After training is over, we certify them as Sky mitras. There are 1,000 plus Sky mitras in the country. When it is monsoon, we assign them based on geography,” revealed Patil. Once the data is received by Skymet, these data gathers will receive payments directly in their accounts. “It is a seamless process.”

Investments and funds for next phase of growth

When the company was exploring opportunities in the agriculture sector, it was aware that it needed to invest in infrastructure. Up until 2010, the company was bootstrapped. It got its first investor in 2010, after India-focused agtech venture capital, Omnivore Partners invested USD 1 million in series A funding round. Patil stressed at that time there was no start-up culture. “However, food security was an important conversation at that time,” stated Patil. At that time, Godrej Group wanted to contribute to achieving food security in the country. This national focus on food security helped Skymet attract investments then. This investment helped the company to put up its own observation units in Bihar and Maharashtra.

The next investment came from UK-based Daily Mail Group, making it Skymet’s second investor. In 2017, it raised a Series C investment from the German government’s InsuResilience Investment Fund. “Post this investment, we started investing more in space technology,” Patil stated. “We started deploying drones for stock loss assessment as well.”

Over the period, the company have received a total investment of around USD 10 million.

Recently, the company went for a debt round. “This is because we were doing a large project in Bihar and we were upgrading the weather observation in Bihar. We are also looking at improving our observation network in Gujarat. We want to do a lot of investment in our geospatial capabilities as well.” In addition, Patil said the company is improving its skills in Artificial Intelligence Markup Language (AIML), as it is an area it is lagging in compared to its competition. However, Patil stated, the data sets that the company has makes it stand out among its peers.

Skymet has good coverage in the western part of India in the case of observation points, and in the south, the state governments have set up many observations points. However, it is the eastern and northern part of India that needs heavy investment in the case of observations points. Patil stated that if the company wants a (universal) presence in India, it will need an additional 10,000 stations across the country, which would mean an investment of around Rs 100 crore.

Patil highlighted the private-public partnerships model that Skymet has built can be replicated in other countries. He stressed that in Africa there can be a lot of opportunities for Skymet as their needs are still untapped.

R N Bhaskar 10 August 2015 The brittleness of impatience crackles. There is the familiar irritable fretfulness of politicians and industry captains as they chafe against...