Home Policy Watch The government prevents farmers from being self-reliant 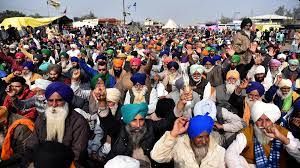 Last week, the government shocked economy watchers when it announced an extension of the ban on futures trading in select agricultural commodities for a year.  It would appear that the government wants this bank to remain in place till the coming general elections in 2024. Effectively it has ensured that the farmer does not become atma nirbhar or self-reliant.  Instead, it has made him even more Sarkar nirbhar (dependent on the government’s caprices). 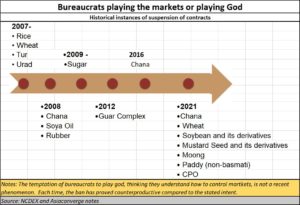 These columns have protested against such a ban  (https://asiaconverge.com/2022/10/the-folly-of-banning-futures-trading-in-commodities/).  So have other publications (https://wap.business-standard.com/article/opinion/hedging-risks-122122101284_1.html).  They prevent farmers, traders and even policy planners from price discovery and deciding on course correction either when planting next year’s crops or in enhancing incentives for growing other ignored but vital crops.

Eventually, the best justification for maintaining the ban on commodity derivatives trading should, obviously, be whether it tamed inflation.  Past records show that it has not.  On the contrary prices have gone up.  The case of the government’s penchant for edible oil imports confirms this without an iota of doubt (https://asiaconverge.com/2022/01/the-government-lets-down-indias-edible-oil-industry/). 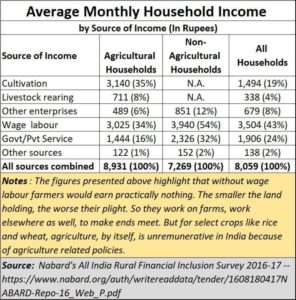 Instead, it cripples the farmer and makes him depended on government policies, which also include imports.  The last hurts farmers more savagely – a view that was strongly voiced by none other than Dr. Verghese Kurien (https://asiaconverge.com/2021/11/remembering-kurien-and-how-much-the-country-owes-to-him/).

In fact, the farmer needs futures guidance to improve his earnings by planting those crops which promise him a better income. At present, thanks largely to the myopic policies of successive governments, farmers earn practically nothing (https://asiaconverge.com/2022/02/budget-22-the-farmer-betrayed/). The prime minister had promised them a doubling of incomes.  That hasn’t happened.  Now, with the banning of futures trades, the government could cripple farmers further.

Today, the farmer makes more money through livestock rearing and working as a daily wage labourer than he does from cultivation.  Even his livestock earnings have been whittled down because of the ill-advised ban on cow slaughter without compensation (https://asiaconverge.com/2022/08/rural-markets-will-decide-indias-revival/)

Consider two other factors that show how government schemes have been aimed at profiting industry more than agriculture.  Look at the CARE Ratings paper dated September 20, 2021, on the Production Linked Incentive scheme promoted by the government (2022-12-29_2021-09-20_CARE_What the PLI will mean for the economy). You will observe that the government’s plans involved an incentive outlay of Rs.1,72,974 crore for an employment potential of 34.42 lakh people.  Now compare this with the government’s

own statements before the Parliament (Lok Sabha Starred Question No *33; 8 December 2022; reply by Narayan Rane,  Minister of Micro, Small and Medium Enterprises) where he talks about how “A Scheme for Promotion of Innovation, Rural Industries and Entrepreneurship (ASPIRE) was launched on 16.03.2015 with an objective of setting up a network of Livelihood Business Incubators (LBIs) and Technology Business Incubators (TBIs) to create new jobs and reduce unemployment, promote ncaretrepreneurship and innovation in agro-rural sector. . . . . Till 30.09.2022, 65,467 beneficiaries have been trained in 81 LBIs, of which 16,338 trainees got self-employed and 9,874 trainees got employed in agro-rural sector. . . . . Till 30.11.2022, under ASPIRE Fund of Funds, 05 AIFs have invested Rs. 579.33 cr. in 91 agro-rural based enterprises leading to an increase in turnover by Rs. 4278.77 cr. and creation of 6537 new jobs.”  Compare the pathetic outlays which translate into a higher capital to job creation ratio than the vast investments in industry (A copy of the Lok Sabha statement can be got from 2022-12-29_2022-12_Lok Sabha_Agri-investments2).

Or compare the pathetically small outlays against the loans that Indian banks (mostly government owned banks) have written off.

What is sad is that the government has done this despite the awareness that agriculture creates the maximum number of jobs in India.  Surely, the investments in creating more and better paying jobs in agriculture should have been a bigger priority! Banning futures trade in agricultural commodities only worsens the plight of the farmers. 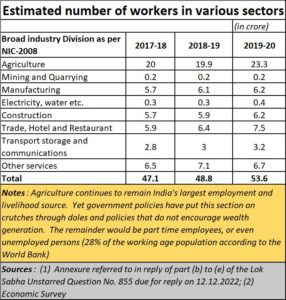 Clearly, the government needs to pull up its policy makers and roll back the ban on commodity and futures trading.  This government has the sad record of placing the largest number of agricultural commodities under the futures trading ban.

Such a policy is retrograde.  It is anti-farmer.  It is even anti-national, because it has the potential to reduce the per capita income of the largest section of its population that depends sorely on rural incomes.

Will the government listen to reason? 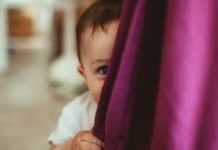 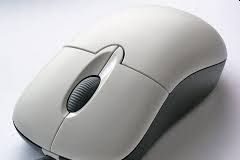 https://www.freepressjournal.in/business/policy-watch-e-solutions-cannot-substitute-efficiency-integrity-and-intelligence India stunts its own ecommerce potential RN Bhaskar India has always prided itself on its IT (information Technology) skills.  It believes that it can become the...