Will Russia-India-China become the new global centre of gravity?

Last fortnight, Russia and China entered into a 30-year contract worth $400 billion for supply of piped natural gas from Russia to China. This one deal could cause realignment of global relationships based on resources.

India, which pays high price for gas imports, too, has begun looking at this deal.

While the price at which Russia will supply gas has not been disclosed, there are reasons to believe it could be $8-9 per mmbtu, though some analysts claim it could be more than$11.

India was purchasing LNG (liquefied natural gas) from Qatar at $12 per mmBtu (million metric British thermal units) when the US was paying just $3 for the same product from the same source at the same time.

Some experts say the gas pipeline should be extended from Russia, through China to India.

Russia again
If that happens, it could bring Russia, India and China closer than ever before and shift the geopolitical centre of gravity to the East.
India was close to Russia in the 1960s and 1970s, but then came the turn of the Germans during the 1980s who became India’s largest trade partners. The subsequent two decades saw India tilting towards the US. And now it could be India’s turn to move back to Russia, and even to China.

This is what one can decipher from numbers (See table). To understand the table better, it is time to take note of a few axiomatic truths. 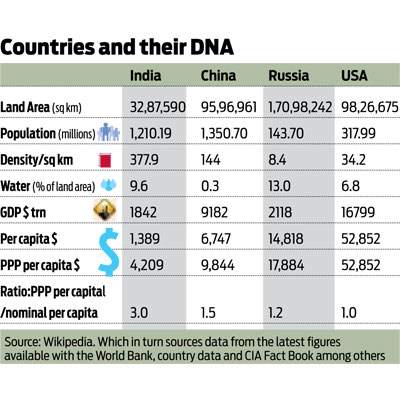 Axioms
First, you can choose your friends, but not neighbours. This is more true when it comes to geopolitics, as geographical neighbourhoods cannot be changed.

Second, it is therefore imperative to be friends with your neighbours, than to have festering relationships.

Third, countries have their own imperatives. One is the amount of land they have; two the population that resides there, and three the amount of water that exists within their borders.

While is easy to compute land area, it is bit difficult to count the exact number of people.

But it is difficult to compute the exact amount of water a country. The closest one can get is by mapping – using satellite imagery – the surface area of water as a percentage of land. However, this figure can be imperfect – Brazil is shown to have very little water, but it has a river flowing underground, which provides it two times the apparent water. Same is the case with China. During the rains, and when the ice on mountains melts, China’s water surface can swell to as much as 6% of its land mass. Most of the year it remains at 2%, though the latest figures shown by Wikipedia is 0.28%. But in absence of any other reliable indicator, water as a percentage of land mass is a decent starting point.

And this is where the numbers start telling their own story.

China
As it is industrialising at a rapid pace, China may need huge amount of water. It has very little water compared to either its population or land mass. So it will try and source water from somewhere else. This means it will tap into rivers that originate from within its boundaries. It has done this with the Mekong river. It could soon do this with the Brahmaputra which flows from China (http://www.dnaindia.com/india/report-india-losing-water-war-1982524). It could also persuade Nepal to let it share some of the waters originating from that country. Nepal’s rivers contribute to the waters of the Ganga and the Yamuna. If these rivers lose their waters, the whole of North India could become a desert. Bangladesh would face a famine.

Russia
But there is a way out. Russia has the world’s largest water reserves compared to land mass. Russia also has the world’s largest land mass – almost twice the size of US or China. Could Russia be persuaded to share its waters with China in return for more access to India’s markets? But Russia has its own problems. It has very few people, having one of the poorest densities of population in the world. With few people, it will not be able to exploit all the wealth its land mass can offer. On the other hand, if the EU stops purchasing Russia’s gas, China would be a better bet and bigger consumer of gas than the whole of the EU.

India
India will also need this gas at this price. And it makes sense to build a gas pipeline right from Russia through China and to India. The managing director of ONGC-OVL has gone on record stating that such a move is desirable.That will reduce India’s vulnerability to Qatar and the West. Both India and China are also the largest consumers of gold, which Russia has in abundance. One more reason for India and China to forge closer links with Russia.

But does India have anything to offer to Russia? Yes, its abundant manpower, which can be used in the controlled manner (as in the Middle East) to develop Russia’s mines, its railway and telecom networks, and its highways. India’s population density is 2.6 times greater than China’s. Therefore, its need to find Indians jobs overseas is of greater strategic significance. India needs to work out a deal with Russia for this.

As for India and China, the need to work together is critical. Both share a very long border and have been friends for centuries. China is already building a railway line connecting Myanmar, through Bangladesh and India into China. It makes for India to work towards forging more linkages with all these countries. If finance is a problem, China is willing to fund it. In fact, it has already offered to invest $300 billion in India, nullifying its trade deficit with India (At $70 billion a year, China is already India’s biggest trade partner).
This does not mean that India abandon its other friends. Japan is likely to remain a major investor in India (http://www.dnaindia.com/money/report-fdi-inflows-from-japan-slowing-amid-government-s-inaction-1982757). The US and the EU are also looking at benefiting from India’s market.

But India needs to look beyond the West. Friendship involving Russia, India and China will be far more rewarding. And considering that India’s per capita PPP is 2-3 times that of China, Russia, or the US, there are reasons to believe that India’s currency will grow stronger much more rapidly. But this cannot happen if India does not work with Russia and China to create a new global order. 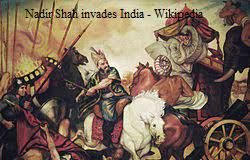 India plunder – Part III: The govt is bigger plunderer than...