Home Analysis Indian laws: Designed to protect and promote bribery all the time 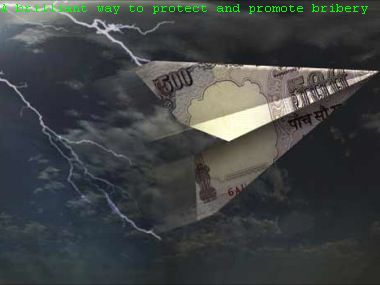 The law of unintended consequences seems to be at work again. The government has found that the Finmeccanica helicopter bribery scam has found other unexpected targets. The torpedo deal for the Scorpene submarines (that India had so proudly deployed recently) has got stuck. Reason: they were to be supplied by a firm which is a subsidiary of Finmeccanica. This is what happened with the Bofors deal as well. The guns had been supplied. Then came the information that someone in India had received a bribe. Bofors was black-listed. As a result, one of the best guns that India had purchased could not be used, because the ammunition for these guns also came from Bofors.

By blacklisting the bribe-givers without first prosecuting and convicting the bribe-takers, India was, in effect, cutting its nose to spite its face.

Consider the first possibility. Let us assume that the one who gives the bribe is guilty. Somehow the law does not take into account the difference between two categories of bribe givers. There is a class of people who give bribes to subvert an existing process. They voluntarily offer bribes. But more unfortunate are those bribe givers who know that they have no choice but to give a bribe if they have to lead a simple hassle free life.

For instance most people know that they will never get their application for a ration card, or a driving licence, cleared easily unless they pay a tout who in turn pays the authorities. Should that kind of bribe be equal to the bribe a person gives to queer the system?

India’s lawmakers have never bothered to make this distinction, possibly because they know that they are unlikely to face that inconvenience and hassle that common men face. If that is indeed the case, it is a pity. It would show how disconnected India’s lawmakers are from the difficulties common people face.

But there could be another explanation. Could it be that a part of the bribe that the authorities take for giving a driving licence or a ration card eventually finds its way into the pockets of the lawmakers themselves? Could it be that this system is abetted by legislators and bureaucrats alike primarily because they are themselves beneficiaries? This is a question that =demands answers, because that would let people know whether India’s lawmakers are merely callous, or even criminal in their acts of commission and omission.

Then take the second possibility Is the victim of an extortion bid a criminal? If that were indeed so, would be akin to saying that the girl who is raped is as guilty as the rapist, right?

If a ransom has been demanded by a kidnapper, and the ransom is paid, should the person who pays the ransom amount also be held guilty? If that is indeed the case, the swap deal that the government of India finalised with the Kandahar terrorists for releasing the hostages on the IC-184 was also a case of bribery, nothing else.

In fact, when it comes to petty bribery, most bribes are nothing but extortionist bids. That is what the common man must pay the police, the shops and establishment Act inspectors, the food inspectors, the octroi inspectors and even officials of municipalities and government departments.

All these are instances of exploitation. They are nothing short of extortion. Obviously, the man who pays cannot be held guilty, because his own life and well-being was at risk.

Speed money and the oath of office

Take the third possibility. As a sales person, my job is to sell. I know that the government official will be willing to push the file a little faster if I buy a gift for his son. So I decide to buy a gift for the son on his birthday, or at the time of festivities – like Diwali.

I may be wrong in trying to corrupt a government officer. But I need my job. The government won’t bail me out in case I am dismissed primarily because I could not get some work done by a government clerk.

But now look at the government employee. He is certainly not in the same boat as I am. I have a need. But he has a responsibility bound by an oath not to succumb to temptations, bribes or blandishments. If I do succeed in giving the gift, and the clerk accepts the gift, who is more guilty – the one who violates an oath of office, or the person who has made no such promise, and used this method just to clinch a deal?

Is the law an ass, or merely blind?

According to Indian laws, both the giver and the receiver of bribes is guilty. It remains (largely) silent on extortion, however.

As a result of this peculiar stand, everybody knows that neither will the bribe-giver come forward to complain, nor will the bribe taker admit that he has taken a bribe.

The giver of the bribe dare not complain because he know that he could get arrested for even saying that he has given a bribe. As a result he keeps quiet.

The receiver of the bribe too knows that it is best for him to keep quiet. After all, he has accepted the bribe. If he had objected to the bribe, and if he were a government servant, he could have filed charges against the bribe giver for trying to bribe a public officer. But he chose not to. That, by itself was a crime. And the fact that he has taken a bribe is also a crime. He will need to keep quiet, and even erase all traces of the bribe taken. You can be sure that he will not register a complaint, lest that complaint itself indicts him damningly.

The only time when things can take an ugly turn is when the bribe taker is being charged with something else – like owning assets disproportionate to his known sources of income. Upon sustained interrogation, he might confess that he has taken a bribe. At that time, if the bribe giver has concealed his tracks well, he will flatly deny the allegations. After all, it is his word against that of the squealing bribe taker.

If the charges fail to stick against the bribe giver, you can be sure that they will be dropped against the bribe taker as well. The only charge that will stick, however, is that of disproportionate assets. It will be a case of concealing sources of income. But the bribery charge will not longer be applicable.

Thus, you end up in a Kafka-esque world. This is where neither the bribe giver nor the bribe taker dare squeal against each other. The benefit invariably goes to the bribe taker – because he is left with money and benefits that he should not have.

In other words, Indian laws promote – even protect – bribery.

So what is the way out?

Next part: How to minimize bribe giving and taking? 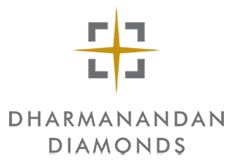 Surat is where the action in diamonds can be found Dharmanandan Diamonds, established four decades ago, is among the premier players in the established Surat...