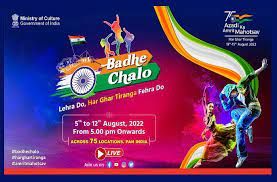 India is 75, but what is it celebrating?

India has turned 75.  Eulogies are being sung. A campaign to have the country’s tricolour flag flying atop every house is underway.  There is no shortage of sloganeering. 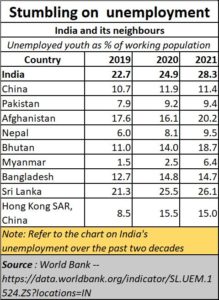 Obviously, when state abetted frenzy is at its peak, sanity takes a back seat.  Just one simple question will do. What will India do when the flags (made of cheap material) begin to look soiled, or are discarded by households?  Will they get trampled upon?  Or swept into garbage bins? Or will they add to the garbage India produces each day – an additional hundred tonnes or more should not matter much, right? Is there no better way of celebrating India’s 75th Independence Day without adding to pollution and expenditure?

Of course, there is no shortage of volunteers who are paid daily wages for their efforts. Reason? Unemployment is running at its peak.  And that is where the celebration sounds hollow.  Even 75 years after independence, India has not yet learnt how to treat its human resources with care, dignity, and planning.

A historical perspective of unemployment in India may be required. Once again, according to World Bank data, India has

But the malaise runs deeper.  Thus,  youth unemployment which stood at 15.5% of the working population in 1991  has climbed year after year, till it has reached 28.3% last year.

One of the primary causes for this elevated level of unemployment is unemployability. For decades, educationists have been telling successive governments that educational standards have been falling in schools.

They have all pleaded helplessness claiming that the problem actually lies with state government under which state schools are administered.  That is a specious argument.  Education is on the concurrent list of the Constitution.  Primary education remains the Central government’s responsibility.  If it wanted to, it could have used the big stick it has – of financial allocations – to rein in management of school education by state governments.

India desperately requires a system where outcomes for every student, and teacher, even schools, needs to be measured each year.  Thus, if the average marks secured by  students in a particular class were 50% at the time of admission, passing out tests, administered by independent authorities, must show the students getting more than 50 % marks.  If they get less, it means that the teachers have not taught properly, or that the school has not provided the right facilities and incentives for teaching. If this decline happens for two years consecutively, fund allocations to the school should be curtailed.  If this happens for the third year in succession, the school along with all its assets and trust funds should be transferred to the school management with the best outcomes for three consecutive years. That would make school managements focus more on the quality of teaching and ensure that students learn in schools.

But most governments have preferred to bloat their army of education inspectors, who in turn often demand a fee for granting clearances.  The system has become corrupt, and the students suffer. Many school managements prefer to hire teachers who excel in meeting non-curriculum demands, rather than prove themselves excellent at teaching and improving the calibre of students.

Not surprisingly, almost every Pratham (the largest NGOs in India, focussed on education)  report on student performance in its ASER reports points out how, in 2018, only 44.2% of the children in Std V could read the books meant for Std II.  The score had declined from 53.1% in 2008.  (https://img.asercentre.org/docs/ASER%202018/Release%20Material/aserreport2018.pdf).

Take another example.  The New Education Policy (NEP)  was announced in 2018 (https://asiaconverge.com/2020/08/the-national-education-policy-has-little-vision-less-strategy/).  But the prime minister decided to discuss it with his chief minister only now.  Worse, as these columns pointed out, the policy is driven more by ideology than a quest for learning.

Look at the way the NEP excluded the teaching of Mandarin in Indian schools.  This defies logic. This defies logic. Even if China is an enemy, it is good for Indians to learn Mandarin. To understand an enemy better.  To understand Asian history. To explore business opportunities in a territory where China accounts for the world’s largest population.  So countries like Singapore set up new institutes to study Chinese, while India remains myopic about this language (https://www.nie.edu.sg/about-us/news-events/news/news-detail/singapore-to-set-centre-chinese-language). It is only now that this flaw is sought to be corrected by the Indian army (https://www.newindianexpress.com/nation/2022/jul/10/indian-army-focuses-on-imparting-mandarin-language-training-to-its-personnel-2475004.html).

In fact, myopic policies  (https://asiaconverge.com/2022/05/india-wont-prosper-till-education-and-employability-improve/) and poor school education have together contributed to making students unemployable. 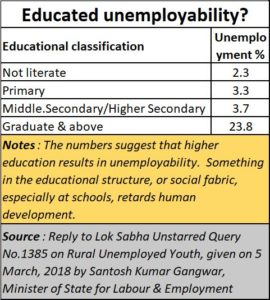 Nothing shows this up as well as the data presented by the government in the Lok Sabha.  It shows how getting a job is quite easy for students without school education.  Unemployment for such people is barely 2.3%.  It increases to 3.3% for students who have done primary schooling and further to 3.7% for those who have done their middle schooling or higher secondary.  But it jumps to 23.8% for graduates and above.

Most graduates do not have the skills that graduates worldwide have.  They are unwilling to take up low wage jobs, and demand white collar jobs instead.  Thus, they remain unemployable.

That is why schemes like Agnipath are dangerous (https://asiaconverge.com/2022/06/the-burning-questions-behind-agnipath/).  They will only end up weaponising the unemployables. India needs to re-think such policies.

The government could have solved this problem by easing labour laws.  But more important, it could have galvanised employment by promoting schemes like rooftop solar (https://asiaconverge.com/2018/09/exorcising-the-unemployment-spectre-with-rooftop-solar/) .  Or even leisure boating for its 7,500 km coastline (https://asiaconverge.com/2010/12/leisure-boating-is-money-jobs-and-even-security/).  But it refused to do so.  It only announced a policy for promoting rooftop solar.

Instead, when Tripura wanted to promote this, the centre said that funds were available only for grid power (https://asiaconverge.com/2019/10/solar-energy%e2%80%88ministries-practice-deceive/).  Despite this hindrance, the then chief minister, Biplab Kumar Deb went ahead and gave solar power connections to 50,000 houses in 2017.  Today, the entire Northeast is clamouring for it. 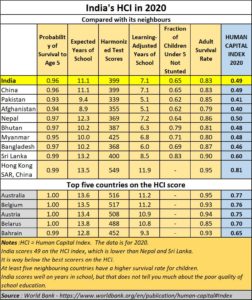 One final indicator.  India loves to tell its people that it will become the biggest and the best in the world.  But this is not reflected in one of the most crucial indicators for growth and welfare – the Human Capital Index compiled by the World Bank.

Even among its neighbours, Sri Lanka and Nepal have a better HCI score than India.  And it is way down the ladder when compared with the best in the world.

These are issues that every India must ponder over.  Completing 75 years without adequate employment or good HCI scores is something to be very anxious about.

It is time for serious introspection.