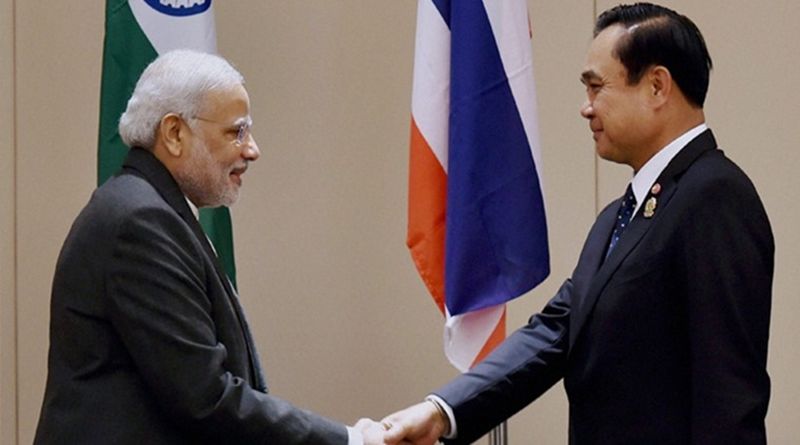 Indians begin to look at Thailand for locating their businesses there

Thailand is not unfamiliar to most Indian businessmen.

he Aditya Birla group was one of the first to discover the advantages of investing in Thailand. This group’s interests span chlor-alkali products, epichlorohydrin epoxy resins sodium phosphates, specialty phosphates sodium sulphite and sodium metabisulphite among others.

Ditto for the Tata group which in engaged in commercial vehicles, steel products, IT and other services in that country.

And over the past few years, scores of businessmen have begun flocking to Thailand for three specific reasons (a more detailed list of India-Thailand businesses can be downloaded from http://www.asiaconverge.com/wp-content/uploads/2018/04/2018-04-05_India-invest-in-Thailand.pdf  and http://www.asiaconverge.com/wp-content/uploads/2018/04/2018-04-05_Thai-invest-in-India.pdf).

First, it is easy to work there.  As explained in these columns last week (http://www.asiaconverge.com/2018/03/lessons-india-could-learn-from-thailand/), Thailand is reputed for the ease of doing business there (the World Bank in 2016 ranked Thailand 2nd in terms of ease of doing business among emerging economies in East Asia.). India talks about such things.  But Thailand has put simplification of procedures into practice.

Second, low tax rates have attracted many businessmen, because they can do business in that country without being subject to the high tax rates prevalent in India.

But there is a third reason as well.  Thailand is quite liberal in the levy of import duties on most products, especially if they are meant for exports.  Many of the Indian businesses therefore use Thailand as a platform for export to other ASEAN countries — Thailand has special protocols in place with most of these countries.

Of course, there are some businessmen, mostly jewellers, who use this opportunity for round tripping gold imports into India in the form of jewellery.  Many gold players have set up their offices in India, Dubai and Thailand for this very purpose. But in comparison to the industry groups that want to do serious business in Thailand, such incidents of round tripping are minuscule.

A good example of how Indian businesses opt to work in Thailand can be found from the expansion plans of Vijay Shah, founder and ceo of the Hi-Tech Membrances. Group.  His group is one of the largest players in India is supplying reverse osmosis (R/O) kits to companies which sell water filters and related equipment.  He took a conscious decision not to get into the consumer interface segment, and opted to operate in the B2B (business to business) segment. He has plants in Parwanoo, Bardoli and Surat in India and began this line of business in 1995 when he imported 100 R/O systems in to India.

Prior to this he and his family were in the construction business in the US here they built around 32 hotels – all given on franchise to some of the best 4-star and 5-star chains in the US.

But he found exporting such R/O systems from India quite difficult.  So he opted to set up his plant in Thailand, where import duty rates are zero (compared to 10%-30% in India).  Much of his Rs.300 crore business in India is primarily earned by catering to the domestic market.

Today his investments in Thailand are just around Rs.8 crore.  He enjoys a 100% tax exemption for seven years.  In just around 18 months, he has already notched up business (both from sales within Thailand as well as through exports) of Rs.30 crore.  Even after the tax exemption period is over, he plans to continue to use Thailand as a platform for exports.  Corporate tax rates there are just around 20% compared to 40% in the US and 30% in India. And if he locates his plant in designated industrial areas, he could get this rate reduced to as little as 7%. He sees an advantage for selling his systems to other businesses in the ASEAN region, notably Australia, Philippines, Vietnam, Myanmar and Pakistan.

He too points to the excellent quality of workforce he can use.  There are few industrial strifes; the government’s policy for industry has remained stable, notwithstanding periodic political upheavals.  There is little moral policing or intolerance of any kind.  And there are enough incentives for industry to set up shop in that country.

An added advantage is the constant emergence of industrial parks.  One of the largest players in this field – Amata – focuses on setting up industrial parks where some of the biggest brands in the world have set up their factories.  The ease with which they have been able to procure industrial land, get power and water connections, and set up linkages with waste disposal systems have made Thailand a great place to do business in.

In fact, these were the very things that Indian business had hoped for when the Modi government was swept into power.  However, notwithstanding promises to make doing business in India easier, a number of problems continue to fester.

One of the most vexatious are laws related to reservations, without any emphasis on merit. Then there is intolerance of one kind or the other which adversely affect life, livelihood and even industry.  A good example of how whimsical decisions can hur industry is by looking at what has happened to the dairy, leather and beef sectors – all of which are huge wealth generators, earners of export income and even provide jobs as they are labour intensive activities. The clamour against women in workplaces or in nightlife related activities has further soured the atmosphere of liberalism that most investors look for.

True, some good work has been done.  State barriers have been brought down with the introduction of GST.  But the rates remain high and the processes extremely arduous and business unfriendly. Some work has been done to expedite tax returns being filed and refunds being made, but a lot more needs to be done.

Equally worrying for industry is the shrinking availability of trained manpower which is needed for the new emerging businesses. The simplification of labour laws still remain work-in-progress. And red tape can be endless when applying for almost anything.  Petty corruption – from protected bureaucrats and petty politicians – is quite well known.

It is any surprise then that Thailand does appear more attractive in comparison?

https://www.freepressjournal.in/analysis/fpj-edit-gloom-worries-economy-watchers Signs of gloom worry economy watchers in India RN Bhaskar – 28 November 2019 The government refuses to admit this. But all the reports compiled by...