Home Analysis Russia could be the next big market for Indian labour as low... 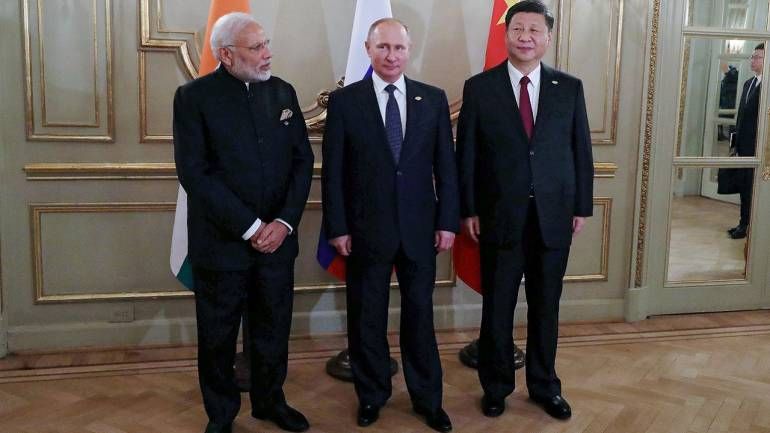 Remittances surge, but there is a dark cloud for India’s labour

As oil prices soften, there are fears that job creation in the Middle East will decline, and India could lose some workers there.

Despite fears that the depressed oil prices would result in a fall in remittances into India, 2017 saw India remaining the top recipient of global remittances (IMF; World Development Indicators; World Bank staff estimates World bank report titled MIGRATION AND REMITTANCES, Recent Developments and Outlook, released in April 2018 – https://www.knomad.org/sites/default/files/2018-04/Migration%20and%20Development%20Brief%2029.pdf).  Indians remitted $69 billion back to their home country which was larger than what the Chinese did ($67 billion).  Both India and China were followed by the Phillippines ($33 bn), Mexico ($31 bn) and Nigeria (22 #bn). India also accounted for the largest number of international migrants – 16.4 million.  The next in the pecking order was Mexico (11.9 million), Russia (11 million), and China (10.1).  A rough calculation is enough to show that the average earning per Indian wqs among the lowest compared to the top five recipients of remittances. That in effect meant that some of the lowest skilled workers were also Indians. But also watch how remittances began surging after 1991 when they stood at just $2.8 billion.  It would appear that liberalization turned out to be good for remittances as well.

Thus, India has three good reasons to feel happy. First, it has remained at the top of the heap for another year.  Second, remittances have surged compared to 2017 (Table 1). Third, the market for remittances is likely to keep growing.

But there is cause for anxiety as well. Indian remittances have still not still not reached the peak level of $70.3 billion in 2015.  And as oil prices soften, there are fears that job creation in the Middle East will decline, and India could lose some workers there.  India will then have to find employment for the people returning from overseas, in addition to finding jobs for resident Indians as well.  And it could witness a fall in remittances as well. Clearly, India’s economy strategists have to identify new markets for Indian labour.  After all, irrespective of whether the overseas worker is an accountant, a lawyer, a plumber or a truck driver, he is still Indian labour.  And India’s biggest exportable surplus is labour. Manpower exports should be a key priority for the government.

That would give Indian three advantages.  It would then earn more foreign exchange.  It would expand the influence of the Indian diaspora. It would also create job opportunities overseas.

India should also create large numbers of workers with verifiable skills. That will allow Indian entrepreneurs to export projects along with qualified labour. But Indian skills are uneven in terms of quality.  Moreover, the Indian worker is also not as disciplined as his Chinese or the Filipino counterpart. Hence project exporters first bag a project, and then go around looking for skills.  It could be done the other way around.

India should also remember that if Indian workers become expensive or remain unskilled, Bangladesh is always around.  The reason India should worry about Bangladeshi’s is evident from Chart 2.  Bangladesh has the highest density among the nations surveyed.  That incentivises Bangladeshis to migrate to other countries like India, Nepal, Myanmar, or even the Middle East.  India has to learn to create skilled workers in large numbers so that they remain cost effective in global labour markets.

India should also try developing project and labour export markets in war ravaged regions like Libya, Iraq and Syria in a much more concerted way than it has till now.  Fortunately, the last four years have seen Indian foreign missions learning to be more responsive to Indian needs and export opportunities than ever before (thanks to the amazing efforts Sushma Swaraj’s role as as India’s external affairs minister). But a lot more needs to be done.

Finally, India should look at developing project and labour export opportunities in Russia.  This is because even though Russia has one of the largest territories in the world, it has very few people. Russia is unlikely to import labour from China for fear of the Chinese becoming squatters on Russian soil.  Russia is wary about the spread of Islamic workers too.  That leaves an opportunity for India. It has already been consolidating its position with Russia in the oil sector (OVL, the ONGC subsidiary has been doing amazing work there). Russia has been talking to Tata Power about developing coal mines in Eastern Russia, and even building a railway line and port there (http://www.asiaconverge.com/2017/04/india-russia-yo-years-of-friendship/ and http://www.asiaconverge.com/2017/04/making-sberbank-relevant-to-india/).  Indian should try get more such projects in Russia.

If India handles the Russian front well, both countries stand to benefit because the future of Asia might depend on Russia, China and India working together (http://www.asiaconverge.com/2014/06/russia-india-china-is-the-magic-formula/). The meeting between the three heads of states in Buenos Aires could thus be a significant move.