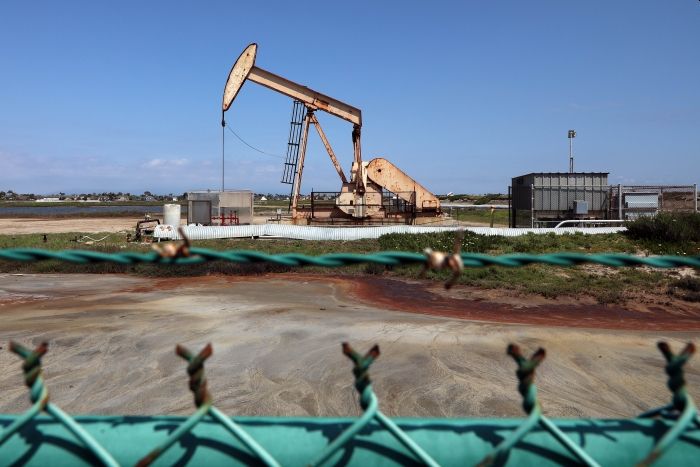 Oil prices tumble.  Is that good for India? Oil prices have crashed.  Just look at the chart alongside sourced from https://www.bbc.com/news/business-52350082. It has plunged into negative territory because traders want to jettison the stocks they had hoarded hoping for an increase in oil prices.  Now they are willing to pay other traders from taking this oil off their hands.

For weeks media was full of reports of oil tanker charter prices firming up. These tankers were being used to stock the excess oil produced.  By last fortnight, empty crude oil tankers were hard to come by.  Now the rentals of these oil tankers are beginning to hurt, and oil prices have been slipping sharply.

Clearly, demand for oil has collapsed thanks to Covid-19 lockdowns, and supply was still high.  Among the countries that are likely to be most savagely hit are the US (The world’s largest oil producer, countries in the Middle East (particularly Saudi Arabia which is the second largest producer), Russia and other oil exporters.  Iran and Russia may be less hurt because they were already coping with sanctions imposed by the US and had lost much of their oil income.

Beneficiaries are likely to be big oil importers – especially China and India.  But for India it could be a double-edged situation. True, its oil bills will fall.  But a drop of oil income in the Middle East will mean a slowdown on fresh recruitment, a slashing down of existing jobs, and stoppage of work on major (ambitious) civil contracts. War torn Iraq was viewed as a goldmine for Indian contractors. Even Abu Dhabi, usually seen to be rolling in surplus cash, opted to debut in the loans market with a request for $2 billion (https://www.reuters.com/article/emirates-loan/abu-dhabi-in-talks-with-banks-for-debut-loan-of-2-billion-sources-idUSL5N2AR7SD).

That could mean many Indians losing their jobs in the Middle East.  India is one of the biggest recipients of remittances (see chart).  There could be steep fall in remittances – it was $68.97 billion last year, which is a bit of a climbdown from a peak of $70.14 billion in 2014.  Falling remittances and rising unemployment will hit India hard, offsetting some of the benefits accruing from the fall in oil prices.

One of the biggest losers could be US President Donald Trump who is known to have his vote banks in an around Texas.  Falling oil prices have already meant the closure of several shale gas producers.  Now it will hit the big oil producers too – headquartered mostly in Texas.  Over the years, Texas has emerged as a major financier of US elections as well.

That could also explain why the US President worked hard to broker peace between Russia (which refused to abide by the OPEC suggested production cuts) and Saudi Arabia (a close ally of the US).  However, just as peace talks began, Mexico refused to agree to production cuts.

The OPEC cartel is so fragile today – thanks also to the embargoes imposed by the US on Russia and Iran – that it just needed a renegade like Mexico to break the agreement between Russia and Saudi Arabia on oil cuts.

Expect some bleeding to continue.  Will this lead to the abandonment of the sanctions on oil income imposed by the US over Russian and Iranian oil?  Will this mean that OPEC will be allowed to emerge as the price guarantor of oil, bolstered by the US.  The truth is that nobody knows.

The US is itself too weak – after being perceived as a wrecker of multilateral forums like the WHO, and arbitrarily breaking the accord over Iran, and being savagely mauled by the coronavirus epidemic – to crack the whip and get all oil producers to toe the line that OPEC draws. And the drop in oil prices could hurt it a lot more.

It may not be long, that the contagion will affect banks as well which had lent huge sums of money to oil producers.  Already one major oil trading company in Singapore defaulted a day ago.  More heads could roll soon.

https://www.freepressjournal.in/analysis/oil-prices-could-be-on-fire-will-india-get-scalded Oil prices flare up. Beware India. By RN Bhaskar Oil prices are going up. But domestic oil prices have not been increased. Is it the elections?...