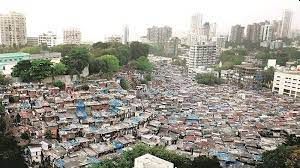 India’s myopia is threatening life across the world

No matter what the government may say, the Covid infections have already claimed 5 million lives in India (https://asiaconverge.com/2021/08/slums-1-big-danger-ahead-pandemic-and-possibly-mass-extermination/). The strong correlationship between Covid infested cities and slums cannot be denied (except for Kerala where other causes caused the epidemic flare-up).

Many more lives will be lost.  Moreover, the time interval between pandemics will continue to shorten. And there is a growing awareness that the epicentre for the spread of such infections could be slums in India.

The congestion, the pressure on urbanization, and the incentives given by politicians to create more and more slums have made slums dangerous and lucrative. They provide the perfect petri-dish to incubate new virus variants, some of which may not be kept away by existing vaccines.

Just look at what is happening in Israel (https://www.wsj.com/articles/israel-80-vaccinated-suffers-another-covid-19-surge-11628769603). This could happen in India as well. Israel is widely vaccinated.  So is Singapore.  And China.  Yet, the virus has reappeared there too. Most of them are now afflicted with a variant that came from India – the Delta and the Delta Plus.  There is no guarantee that more variants will not be on their way. 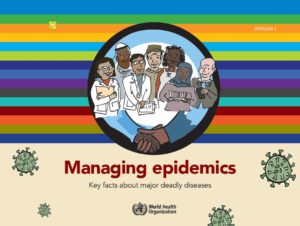 Or listen to the World Health Organisation.  In its document on Managing Epidemics (https://www.who.int/emergencies/diseases/managing-epidemics-interactive.pdf) , it points out how “we are continuously learning about the unpredictable powers of nature. This is nowhere more true than in the continuous evolution of new infectious threats to human health that emerge – often without warning – from the natural environment.

Covid will not be the last, and 5 million deaths in India ill not be the final figure either.  Remember, HIV killed 35 million. A look at the list of epidemics is also quite educative (https://en.wikipedia.org/wiki/List_of_epidemics).  Covid is more rightening because it does not affect only the poor or the deviant.  It affects the affluent, the responsible and even people who thought that they maintained good hygiene.  It has terrified the police, businessmen and common folk alike. 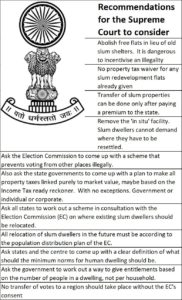 In addition to being a fertile ground for incubating new strains of viruses like Covid, slums do other terrible things:

Purchasing a house is often the biggest investment a person makes in India.  He buys a house, and is quite happy with it.  Suddenly, slums surround his building and its market value falls.  The householder who pays taxes feels miserable about it. But he has no choice but to live with the new reality.  The major beneficiaries are the slum dwellers, the politicians who new votebanks and the government apparatus that makes money out of bribes and theft of entitlements.

Gifting squatters free flats corrodes ethics.  No sense talking about preservation of India’s culture, if you cannot protect basic ethics.  You effectively tell an honest Bihari that he is a fool. He comes to Mumbai, picks up rental accommodation, shares it with six people, and goes about earning money and sending it back home.  He ought to have latched on to a politician instead, and squatted on public land.  He would have paid the rental amount to the slumlord, but would have got a free flat in the end.  Promoting slums teaches people dishonesty.

The squatter occupies open spaces, which are then regularised and made into houses.  That further congests a city and makes is more unlivable.

Slums also debase people.  When people have to line up outside public toilets – 30 people to one seat – it is dehumanizing.  When people don’t even have a corner for privacy at home which is a 350 square feet flat  in a free redevelopment flat, that is dehumanizing as well. India’s policymakers have degraded humanity by promoting slums.

And now the biggest risk is that slums become super spreader hubs and the cause for making other people die.  They have to be stopped.

But how?  That is a difficult job indeed.  The politician won’t help.  He loses his votebanks.  The police and the municipal worker won’t support such a cause either.  They may have relatives living in slums, and are also beneficiaries of graft (https://asiaconverge.com/2021/08/slums-2-benefitting-politicians-and-graft-seekers/).

The only two constitutional bodies that can remedy this situation are the Supreme Court (SC) of India and the Election Commission (EC).  This is because they can work independently of the politician and the executive – both of them have become extremely collusive in promoting malpractices in India. The SC has the final say, because it has the right to strike down the EC’s decisions if they are unconstitutional.

The SC and the EC

The SC has the final responsibility for protecting life. And the slums – by being the incubation centre of viruses — are threatening life.  And the SC knows that its fraternity too will be under threat from this epidemic. Clearly, the SC has a huge responsibility and a very big stick. 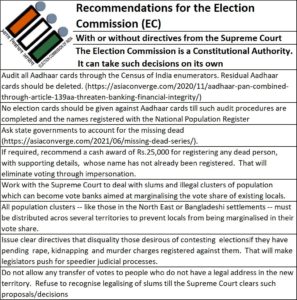 But even this won’t make the job easy for the SC. It my need the help of one or two more people who may have to act as Amicus Curiae (friend of the court) .

For starters, it will have to put a freeze on any further recognition of slums, maybe keep the cut off date for resettlement at 2020. When death stares at everyone in the face, protests over such moves are meaningless. It will also have to ban all in situ (having a new residence in the same location where the slum existed).

The SC will then have to work with the EC (it may also have to instruct the EC) to disallow voting in specific areas by people who do not have a legal residence in such spaces where they are squatters.  Since recognition of the slum post 2020 (or any other cut-off date) stands cancelled, this should be possible.  Remember, we are telling a person that his vote is not cancelled, just that his vote must be cast from a place where he is legally settled.  Else, the EC will have to assign him a suitable place to prevent clustering.

Once the voting power in the illegal squatting space is taken away, the politician is actually defanged.  Much of his interest in the slum ceases.  The graft is anyway illegal.  And to bring proper city planning into focus – and thus minimize the spread of diseases, — the Rent Control Act must go, as must irrational property taxes.  Sale of slum flats also becomes difficult, without paying a price.  The nitty gritties can then be left to city administrators who have to work along the guidelines laid down by the EC.

The EC on its part must order a review of Aadhaar from where bogus votes emerge (https://asiaconverge.com/2020/11/aadhaar-pan-combined-through-article-139aa-threaten-banking-financial-integrity/), It must ensure that the missing dead are properly registered (https://asiaconverge.com/2021/06/missing-dead-series/).  This will permit it to clean up the electoral rolls, even while dealing with the problem of slums.

Together, hey could bring some sanity back into electoral processes, slum formation and the creation of votebanks. It will  also help the country in knowing the correct numbers of the dead.

There will always be the risk of engineered riots, and the SC and the EC will have to work together to hold the executive and the legislature responsible for any failure to curb it – even on the pain of dismissal or imprisonment. When millions of lives are at stake, most of such measures will have to be passed.  One way or the other.

The risk of slums becoming promoters of pestilence is so great that if India does not move quickly to contain it, badly affected nations will rise up to protest.  India may even be sanctioned for such irresponsibility.

The contours of this crisis are huge. How the nation deals with it has now to be seen.

This concludes the three part series on Covid and slums.

It is a spirited debate over ethanol

http://www.freepressjournal.in/analysis/it-is-a-spirited-debate-over-ethanol/1322177 Ethanol for cars is not a good idea in India — By RN Bhaskar | Jul 26, 2018 Each time India faces a glut in sugar production, there...